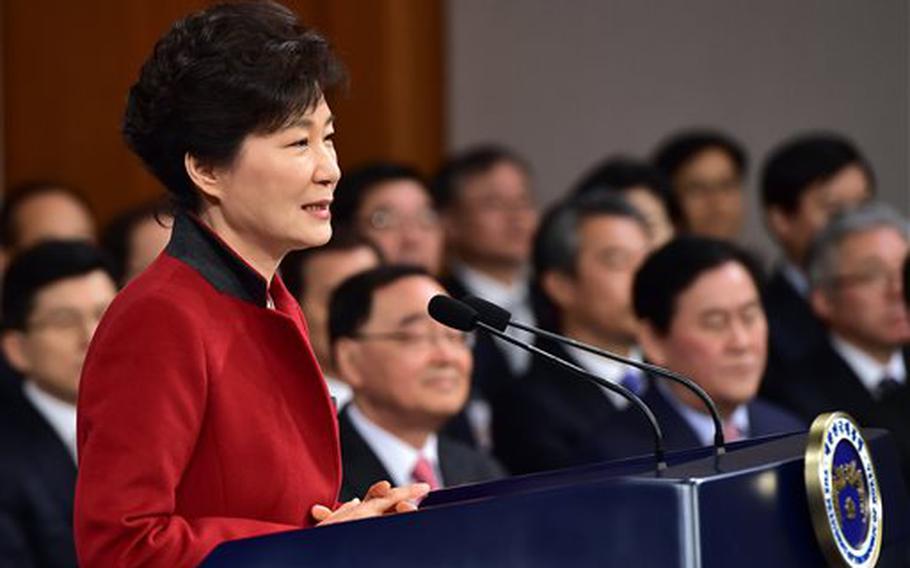 “I can meet with anyone if necessary to open the path of a peaceful unification,” Park Geun-hye said during a nationally televised New Year’s address.

The president said she would ask Pyongyang to address calls to denuclearize, but ending the North’s nuclear program would not be a prerequisite for the proposed talks. The U.S. also said Saturday that it was open to dialogue with the North with a goal of denuclearizing the Korean Peninsula.

The North has conducted three underground nuclear weapons tests in the past few years and has threatened to use them against South Korea and the U.S. It offered Saturday to halt further tests if the U.S. and South Korea halt annual joint military exercises, which the U.S. called an implied threat.

Park said the talks — which would be the first since 2007 — would help lay the groundwork for an eventual reunification of the two Koreas, a key part of her foreign policy agenda.

“North Korea should respond to dialogue without hesitation,” she said.

The prospect of eventual reunification has long been a given for many in South Korea, despite the growing economic, political and cultural disparities between the two countries. Park maintains that the South can lay the groundwork through a series of trust-building measures with the North and that reunification would lead to an economic “bonanza” for the South.

A survey conducted last year by the Seoul National University’s Institute for Peace and Unification Studies found growing support among South Koreans for reunification, with some 55.9 percent of respondents saying it’s in the South’s best interests, up more than 7 percentage points from the previous year.

Park also called for the North to agree to hold reunions around the Feb. 19 Lunar New Year’s holiday for family members on each side of the border who were separated during the 1950-53 Korean War, saying they can no longer be delayed because of the relatives’ advanced ages.

Seoul will also address its strained relationship with Japan by actively pursuing discussions aimed at improving relations with Tokyo, she said, adding that it was important for Japan to change its attitude on issues that have dogged relations.

Anger toward Japan over historical grievances related to its colonization of the Korean Peninsula still runs deep here. Issues ranging from rival claims on islets — called Dokdo by South Korea and Takeshima by Japan — to Japan’s perceived lack of sincerity in apologizing for the sexual enslavement of women during its occupation. Many in South Korea fear Tokyo’s move toward collective self-defense — allowing its forces to come to the defense of allies in combat — signals a return to its past imperial ambitions and a possible threat to the peninsula.

In particular, Park urged Japan to address the “comfort women” issue promptly, saying the matter may never be resolved if Tokyo doesn’t act now because the women are aging.

She also said the South would “firmly” maintain its alliance with the U.S., which has approximately 28,500 troops stationed on the peninsula as a deterrent to the North.