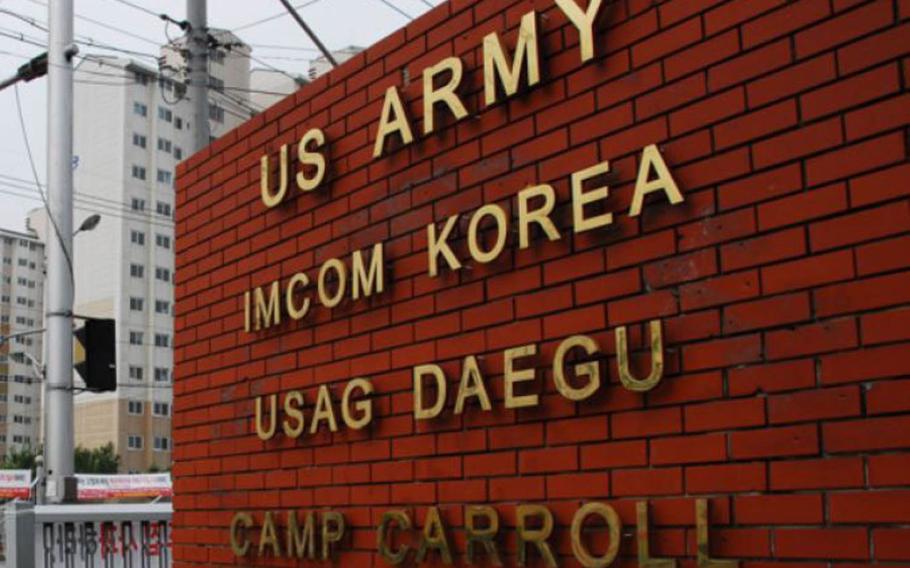 Buy Photo
The entrance to Camp Carroll, South Korea, is shown in this undated file photo. (Stars and Stripes)

SEOUL, South Korea — A South Korean man who worked as a sheet metal mechanic for the U.S. Army has died at Camp Carroll, officials said Thursday.

Kim Song-Cho, 66, a full-time employee with the Directorate of Public Works, died Wednesday while on the job, according to a press release from Army Garrison Daegu, which includes Camp Carroll.

The garrison, which is near the southeastern city of Waegwan, didn’t provide more details pending the ongoing investigation.

However, local police involved in the probe said it appeared to be an accident.

“This is devastating for all of us, but our number one priority is taking care of Kim’s family and assisting his co-workers at this time,” garrison commander Col. Robert Mann said.

“Our sincerest condolences go out to the family, friends and co-workers of Mr. Kim,” he said. “He wasn’t just an employee here. He was part of our USAG Daegu family.”

The investigation was being led by South Korean police with help from garrison emergency services and the Eighth Army safety offices, the press release said.

The incident occurred just before 2 p.m. while Kim was doing repair work on a roof panel near a sewage disposal plant, according to Park Jong Bo, a chief investigator at the local Chilgok police station.

Kim apparently died after he was caught in the pump’s rotor blade while trying to retrieve something he had dropped, Park told Stars and Stripes.

“The details of the accident are still under investigation,” he said, adding that foul play was not suspected.

Chaplains on the garrison were providing grief counseling to co-workers and first responders as well as reaching out to Kim’s family, the press release said.

A funeral service was planned for 9 a.m. Friday at the WaeGwan Nog Hyup funeral hall. Camp Carroll, about 130 miles southeast of Seoul, is one of several bases maintained by the U.S. military, which has some 28,500 servicemembers stationed in South Korea.