South Korea should pay more for US troops by year’s end, Esper says 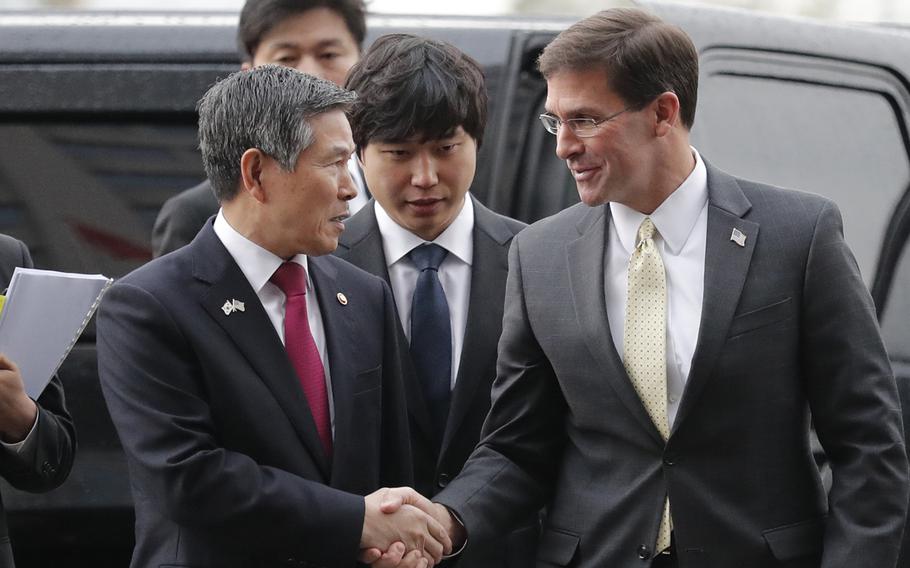 SEOUL, South Korea — South Korea is a wealthy country and should increase its share of the cost for stationing some 28,500 U.S. troops on the divided peninsula by the end of year deadline, Defense Secretary Mark Esper said Friday.

Esper also called on Seoul to reverse its decision to cancel a military intelligence sharing pact with Japan before the Nov. 23 expiration date. The United States fears the termination of the agreement will jeopardize security as North Korea has resumed weapons testing amid stalled nuclear talks.

Both issues have become major irritants in the longstanding alliance between the two countries, which fought together in the 1950-53 Korean War.

The South Koreans have bristled at the U.S. administration’s reported demand to increase Seoul’s share of the burden five-fold. The current contract, known as the Special Measures Agreement, expires at the end of the year.

CNN, citing an anonymous congressional aide and an administration official, said Thursday that it has confirmed that President Donald Trump has demanded that South Korea pay nearly $5 billion, as other news outlets have reported.

The two sides failed to reach agreement in time for the deadline last year but eventually agreed to a retroactive stopgap measure in which South Korea increased its share by about 8.2% to some $920 million. However, that deal was only extended for one year, unlike previous iterations that lasted five years.

"South Korea is a wealthy country and could and should pay more to help offset the cost of defense," Esper said during a joint press conference with his South Korean counterpart Jeong Kyeong-doo after the two sides held annual alliance talks known as the Security Consultative Meeting.

“It is crucial that we conclude the SMA with increased burden sharing by the Republic of Korea before the end of the year,” he added.

Jeong said he shared the view with Esper that the cost-sharing pact should be fair and mutually agreeable, according to the Yonhap News Agency, but neither official gave specific figures.

Esper also acknowledged that South Korea has provided “a fair amount of support” but said most of the funding ended up back in the local economy.

The SMA funds have been used mostly to offset the salaries of more than 9,000 local employees who provide food and administrative services and other logistical needs as well as construction costs.

The South Koreans also point out that they funded most of the $11 billion-plus cost of expanding Camp Humphreys, a U.S. Army post south of Seoul that has become the military’s new headquarters base, as part of a separate agreement.

Esper, who arrived in Seoul on Thursday for his second visit to the country since he took office, later met with President Moon Jae-in and several other senior officials.

During the press conference, he reiterated that the U.S. and South Korea have to “remain flexible” with joint military exercises, hours after North Korea demanded that they be canceled to facilitate negotiations over its nuclear weapons program.

But he did not make any major announcements or mention the upcoming joint air drills that the allies have said they will hold next month.

Esper also will travel to Thailand, the Philippines and Vietnam during his eight-day Asia trip.