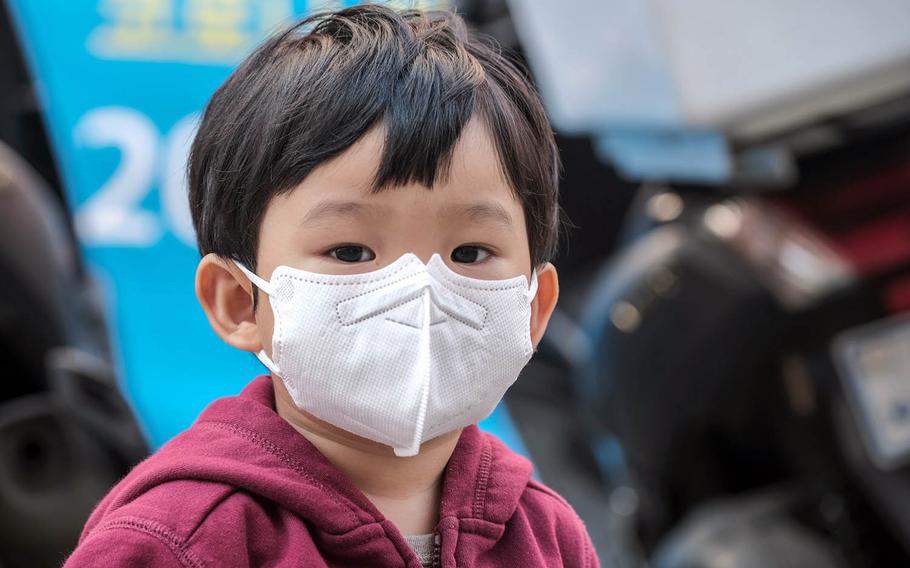 Buy Photo
A child wears his mask while browsing local shops with his mother outside Osan Air Base, South Korea, Oct. 20, 2020. (Matthew Keeler/Stars and Stripes)

The South has seen its caseload decline in recent weeks, prompting local and military authorities to ease restrictions aimed at slowing the spread of the respiratory virus. However, health authorities continued to express concern about cluster outbreaks and imported cases, including U.S. Forces Korea personnel.

The latest arrivals raised the total number of confirmed cases affiliated with USFK to 238. Only 26 of those were contracted locally.

Four of the infected service members arrived on government-chartered flights at Osan Air Base on Oct. 5, 9, 17 and 19, according to a press release. The other three traveled on commercial aircraft that landed at Incheon International Airport on Oct. 18 and 19.

The command has implemented a strict testing and two-week quarantine process to prevent the virus from spreading in local communities.

Four service members received positive results on the initial test required shortly after arrival, while three initially tested negative but were positive on a subsequent test after entering quarantine, USFK said. It said the seven patients were transferred to an isolation facility designated for coronavirus patients on Camp Humphreys.

The overall spike reported Thursday, which officials said was driven by infections at elderly care centers and other medical facilities, raised South Korea’s total to 25,543, with 453 deaths, according to the Korea Disease Control and Prevention Agency.