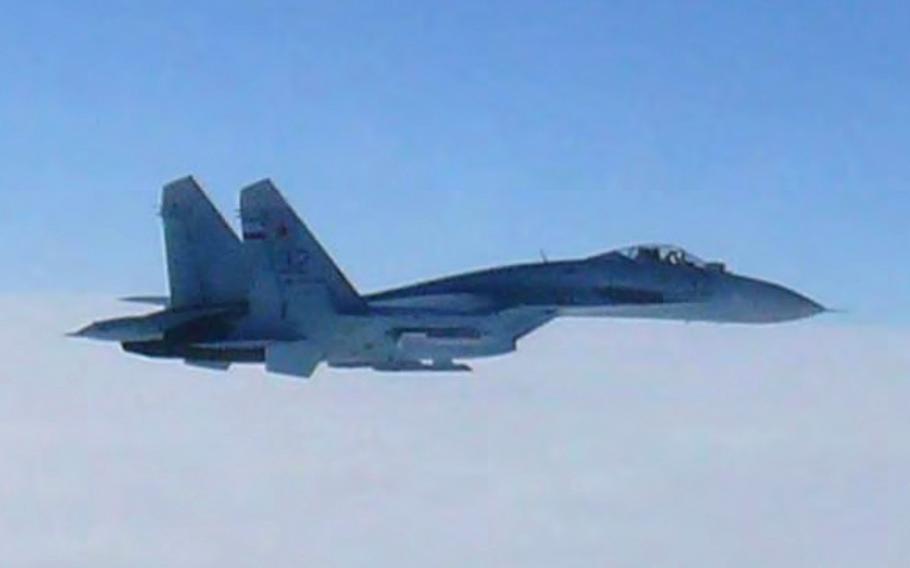 A Russian fighter jet SU-27 flies over the sea off the Japanese island of Hokkaido on Feb. 7, 2013. (The Joint Staff Office of the Defense Ministry of Japan via AP)

The encounter occurred some three months after South Korea fired flares and warning shots at Russian bombers it said violated its airspace. Moscow said it had performed its first long-range joint regional air patrol with China.

The warplanes flew over waters surrounding the Korean Peninsula but did not violate South Korea’s territorial airspace, it said, adding it was the 20th such incident this year.

“Our military urgently dispatched fighter jets to track and monitor the aircraft and broadcast warning messages,” the JCS said in a text message.

Russia’s Defense Ministry said the planes conducted “planned flights over the neutral waters” in the area, according to the Russian news agency Tass.

The bombers “were shadowed” at some stages of the flight route by South Korean and Japanese fighter jets, it said.

"Long-range aviation pilots regularly perform flights in strict compliance with the International Rules of Using the Airspace, without violating the borders of other states," according to Russia’s Defense Ministry.

The two countries are due to hold talks this week on plans to open a hotline between their air forces in a bid to reduce the number of such encounters.