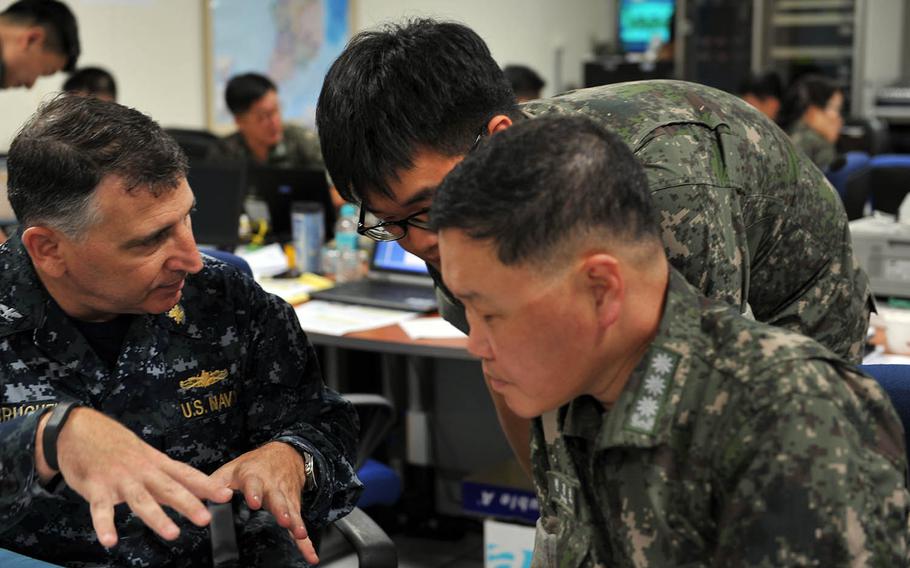 South Korean Defense Minister Suh Wook at a press conference in Seoul said the military is preparing for computer-simulated defensive drills with U.S. forces, according to a partial transcript of Wook’s remarks provided by the defense ministry.

A USFK spokesman declined to confirm the minister’s remarks.

“As a matter of USFK policy, we do not comment on planned or executed training, but rather view training as something all professional militaries conduct to maintain proficiency, credibility, trust and readiness,” Col. Lee Peters said in email Friday.

The two countries canceled a bilateral exercise last spring due to the coronavirus pandemic but conducted a two-week drill in August focused on defending South Korea from an attack by the North.

Large-scale exercises involving U.S. troops on the peninsula — Ulchi Freedom Guardian, Key Resolve and Foal Eagle — were canceled in 2018 by then-President Donald Trump, who called them overly expensive and provocative to North Korea, after an unprecedented meeting with that nation’s leader, Kim Jong Un.

The upcoming exercise won’t involve troops maneuvering, Suh told reporters. However, it could be impacted by the coronavirus, he said.

“Military exercises can be threatening to North Korea,” said Kim Hyun-wook, an American studies professor at Korea National Diplomatic Academy in Seoul. However, he added in a telephone interview Friday, Pyongyang might not have a big problem with upcoming drills since they are computer-based and defensive in nature.

The exercise will be reassuring to South Korea and not overly provocative to the North, said Jeff Kingston, director of Asian studies at Temple University’s Tokyo campus, in a telephone interview Friday.

North Korea showed off some advanced weapons during a Jan. 14 military parade in Pyongyang that included what it claimed to be a new ballistic missile designed to launch from a submarine.

“This is a wait and see time,” Kingston said of the first days of recently inaugurated President Joe Biden’s administration. “What will Pyongyang do to welcome Biden to the table?”

Security experts have warned that North Korea may resume nuclear and long-range missile testing that stopped following the first Trump-Kim summit in Singapore.