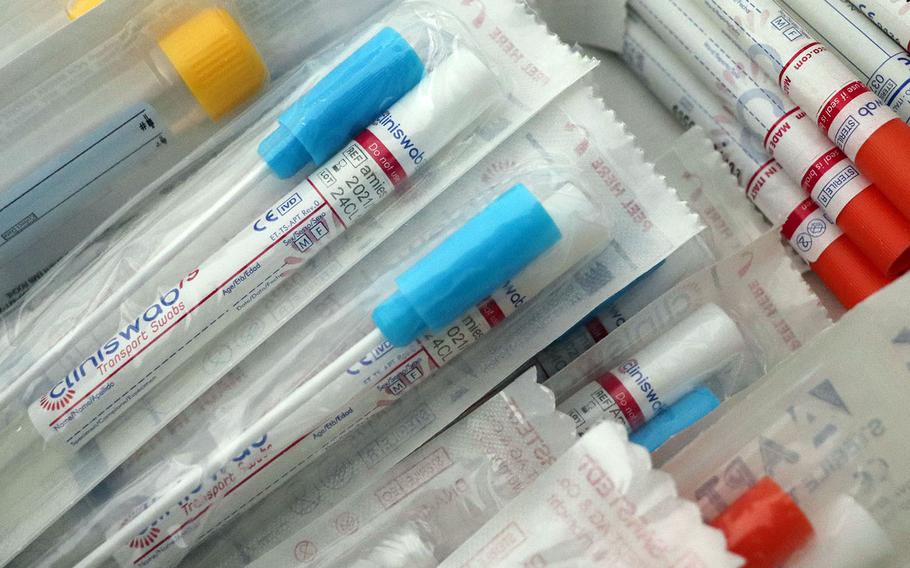 A U.S. service member and a Defense Department civilian contractor also tested positive and were placed in isolation facilities after flying to the South from the United States, the military said Thursday.

The government has warned it may need to implement the strictest level of prevention measures if the caseload continues to climb.

The latest outbreak, which began on Aug. 14, has dealt a blow to hopes that South Korea had the virus under control as it had weeks of relatively low numbers after containing an earlier outbreak with an aggressive approach to testing and tracing.

The latest outbreak, which began on Aug. 14, has dealt a blow to hopes that South Korea had the virus under control as it had weeks of relatively low numbers after containing an earlier outbreak with an aggressive approach to testing and tracing.

It largely began with a cluster of infections that the KCDC linked to the Sarang Jeil church and a massive anti-government rally in Seoul led by the pastor, but has since spread nationwide. Thursday’s figures included 313 in Seoul and surrounding areas.

South Korea, a nation of some 51 million people, has so far avoided the need for the type of lockdown that has been employed in the United States and many other country.

However, the government has banned indoor meetings of more than 50 people and outdoor gatherings of more than 100. It also has ordered karaoke rooms, clubs, buffet restaurants and other high-risk facilities to close, but has stopped short of a lockdown. Many cities also have mandated that masks be worn in public.

U.S. Forces Korea, which commands some 28,500 service members on the divided peninsula, also has raised its health alert level to Charlie, meaning most off-post travel is banned along with many recreational activities in local communities.

USFK has had only 24 locally transmitted cases, including two soldiers, but its total has risen to 168 with an influx of American troops testing positive after flying to the South for new assignments or after trips abroad.

Those included the service member and civilian contractor. One arrived at Osan Air Base on a government-chartered flight on Sunday, while the other arrived at Incheon International Airport on a commercial flight on Monday, USFK said.

Both tested positive on their initial coronavirus test, which is required before a mandatory two-week quarantine, and have been transferred to isolation facilities on Camp Humphreys or Osan, according to the press release.

All transportation assets or quarantine facilities that were used by the affected troops have been thoroughly cleaned, it added.

“Despite the recent confirmed cases, USFK remains at a high state of readiness with less than 1% of its active-duty service members currently confirmed positive with COVID-19,” the command said, referring to the respiratory disease caused by the virus.

President Moon Jae-in warned earlier this week that the government may need to go to what it calls social distancing level three, saying that would mean daily lives coming to a halt, although more specifics have not been laid out.

The previous outbreak, which was centered in the southern city of Daegu, gave South Korea the highest number of cases outside China, where the virus originated late last year. It peaked at 909 cases on Feb. 29 and numbers were down to double digits within weeks.

Authorities have said they’re more concerned now because it’s harder to contain the virus as it spreads from the densely packed Seoul metropolitan area.