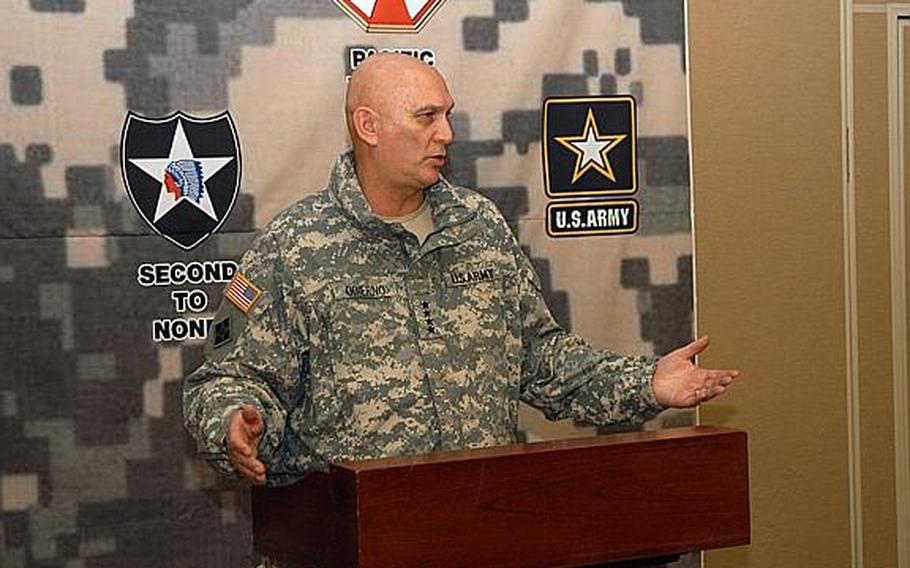 Army Chief of Staff Gen. Ray Odierno speaks Friday during a visit to Camp Casey in South Korea. Odierno said he is confident the South Korean military will be ready to take over wartime operational control of allied forces as scheduled in 2015. (Jon Rabiroff/Stars and Stripes)

Army Chief of Staff Gen. Ray Odierno speaks Friday during a visit to Camp Casey in South Korea. Odierno said he is confident the South Korean military will be ready to take over wartime operational control of allied forces as scheduled in 2015. (Jon Rabiroff/Stars and Stripes) 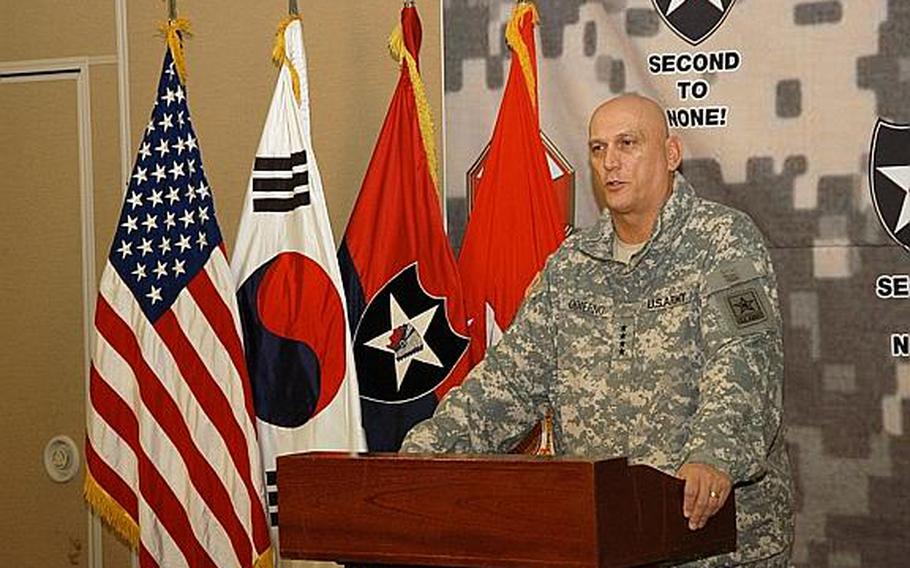 Army Chief of Staff Gen. Ray Odierno speaks Friday during a visit to Camp Casey in South Korea. The planned transfer of wartime operational control of allied forces to the South has been a hot topic of debate for years, but Odierno says he believes South Korea is ready to assume control. (Jon Rabiroff/Stars and Stripes)

&ldquo;Having had the opportunity to work with many nations around the world and many armies throughout my career, I&rsquo;m very confident that the Republic of Korea &hellip; is more than capable of taking over responsibility for their own security,&rdquo; he said during a brief news conference Friday.

&ldquo;I think it&rsquo;s an important step in our alliance as we continue to move forward,&rdquo; Odierno said.

The planned OPCON transfer has been a hot topic of debate in Washington and Seoul for years, given the threat posed by North Korea and varying opinions about whether the South&rsquo;s military is up to the task of leading the fight should hostilities resume on the peninsula.

The transfer of responsibility was initially supposed to happen in 2007, but was pushed forward to 2012. The date was postponed again in 2010 to the current transfer date of 2015 in the wake of criticism of the South&rsquo;s response to North Korea&rsquo;s sinking of one of its warships earlier that year.

Last summer, a Pentagon-commissioned study suggested the U.S. military take a number of steps to cover for perceived shortcomings in the South&rsquo;s ability to defend itself, including delaying the 2015 OPCON transfer until South Korea&rsquo;s military is better prepared to assume the additional responsibilities.

Defense Secretary Leon Panetta, in a letter that accompanied that report &mdash; by the Center for Strategic and International Studies &mdash; when it was submitted to the Senate Armed Services Committee, said the transfer of authority will go through only if the South proves it is up to the challenge.

There are, he wrote, &ldquo;a series of planning milestones toward which the department is already working to ensure that wartime OPCON transition occurs as planned with no loss of readiness of our combined forces.&rdquo;

&ldquo;One of the things we talk about all the time is making sure we have the interoperability to conduct appropriate command and control at all levels, and that&rsquo;s what we continue to work with the Republic of Korea on,&rdquo; he said.

&ldquo;That&rsquo;s why it is important to continue to do these exercises with them in the lead,&rdquo; Odierno continued. &ldquo;It will help us to &hellip; continue to help them to establish the appropriate command-and-control structures for them to be able to execute the operation control in 2015.&rdquo;

Meanwhile, Odierno would not go into detail when asked if USFK commander Gen. James D. Thurman&rsquo;s request last year that an &ldquo;additional attack-reconnaissance squadron&rdquo; be assigned to South Korea will be granted.

The chief of staff, who met with Thurman among others on Friday, said only, &ldquo;We discussed the request potentially for additional support here in Korea, so we are continuing to work through that issue and we expect a decision on whether we will deploy additional capabilities here very shortly.&rdquo;

As part of the Pentagon&rsquo;s Pacific pivot, South Korea has seen a number of upgrades in recent months to the manpower and materials employed by the U.S. military, including the arrival of Mine Resistant Ambush Protected vehicles, Excalibur artillery shells and an Army chemical battalion.

&ldquo;As we rebalance toward the Pacific, it really is about us utilizing the capabilities we have here,&rdquo; Odierno said.