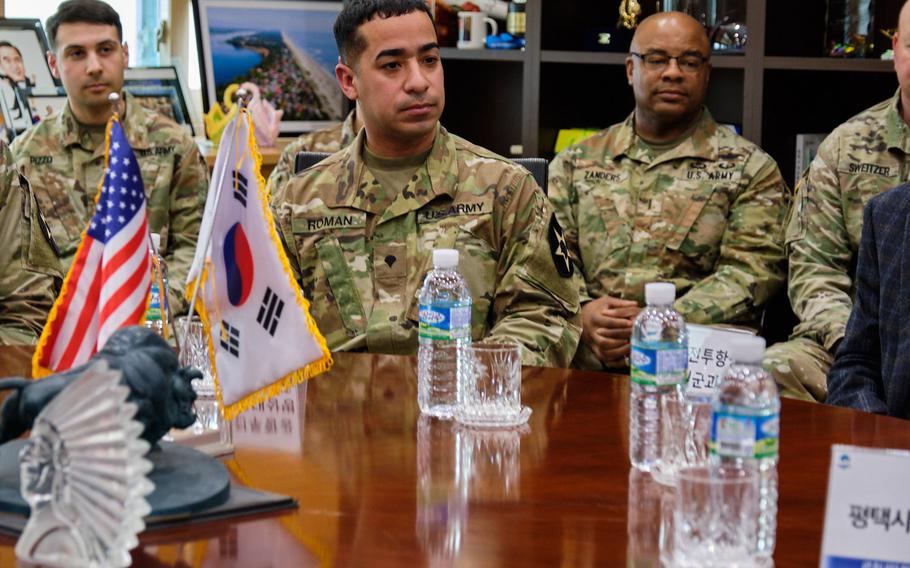 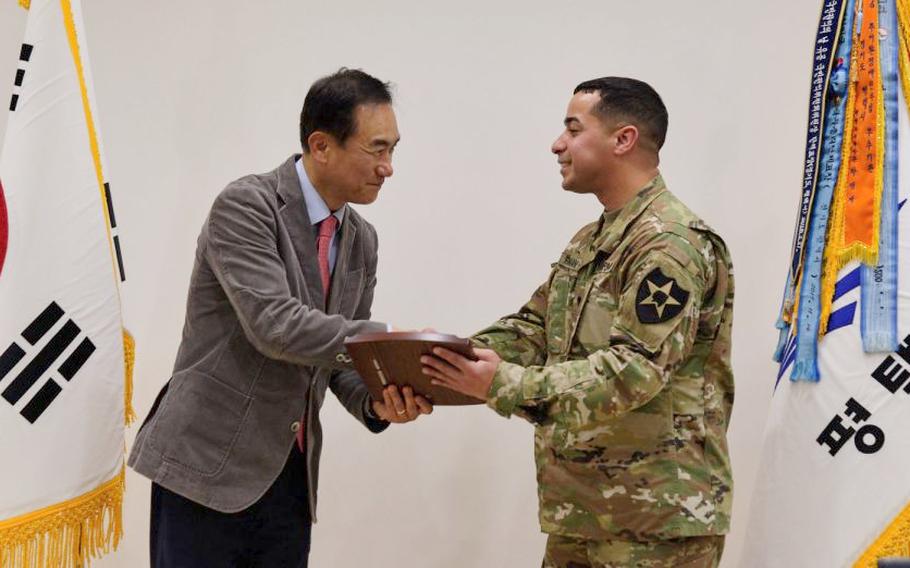 CAMP HUMPHREYS, South Korea — A soldier with the 2nd Infantry Division was recognized Thursday by the city of Pyeongtaek for diverting an aggressive dog away from a Korean girl and taking the brunt of the canine’s attack.

The dog — described by Roman as a white, medium-sized husky — fixated on a Korean woman and a young girl on the street outside the camp pedestrian gate, he said.

Roman, a native of Puerto Rico assigned to the 2nd Combat Aviation Brigade, had just gotten off duty for the day and was headed to a barbecue with friends when he noticed the dog barking at the woman and girl.

“I just saw a dog, but I saw that he was acting crazy,” he told Stars and Stripes on Monday. “I thought maybe he was just playing, but as I got closer I could see he was mad and agitated.”

Roman, the father of two children, believed the girl was in danger and said he felt he had to act.

He described what happened next:

Using his backpack as a decoy, Roman managed to attract the dog’s attention. It bit into the pack and hung on while the woman and girl ran off.

Roman fought with the dog for several minutes, trying to retrieve his backpack in one piece and make a run for it. He also shouted to nearby pedestrians to get back. Then the dog struck.

“The dog was either too fast or I was too slow, but he bit into the backside of my leg just below the calf muscle,” he said.

Another woman nearby saw the attack and began screaming; Roman said he quickly tried to calm her.

He used his backpack once more to push the dog away and escaped. Putting a brick fence between himself and the dog, he warned other pedestrians to stay away.

Roman said someone who may have been the dog’s owner came and secured the animal to a chain.

He said he received rabies shots — standard treatment after dog bites —every four or five days for three weeks. His bite wounds were the size of half-dollars.

During a ceremony Thursday at Pyeongtaek City Hall, Roman received personal gratitude and a custom plaque from Mayor Jung Jang-seon while surrounded by dozens of uniformed members of his command.

“We are very appreciative of what you did,” Jung said. “On behalf of Pyeongtaek citizens, I convey my deepest thanks to you.”

Roman told the mayor: “I'm honored to help and serve.”

Col. Brian Watkins, commander of the 2nd Combat Aviation Brigade, told the mayor that soldiers do not do such things for the recognition, “we do it because it’s the right thing to do.”

“Anyone wearing the U.S. Army over their hearts understands the sacrifice they may be asked to make, to help, serve and protect not only the American people, but also our allies,” he said. “That is what makes the [South Korean]-U.S. alliance so unique. We are willing to make those sacrifices for each other.”