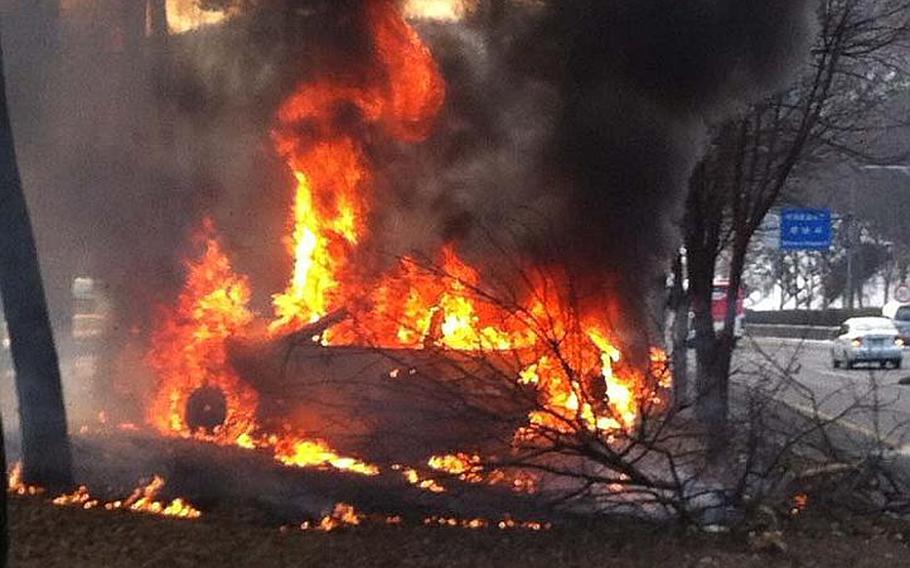 A car is engulfed in flames after crashing into a tree along a South Korea highway on Jan. 11, 2013. Sgt. 1st Class David George is being credited with saving the life of the Korean driver of the car by pulling him from the vehicle shortly before it burst into flames, according to a 2nd Infantry Division release. (Photo courtesy U.S. Army)

SEOUL &mdash; A U.S. soldier is being credited with saving the life of a South Korean driver by pulling him from the wreckage of his car shortly before it burst into flames.

According to a 2nd Infantry Division statement, Sgt. 1st Class David George was driving home Friday from Camp Humphreys on Highway 61/Bundang Expressway when he noticed a vehicle had run off the road and into a tree.

The passenger was trying in vain to pull the driver from the wreckage, so George handed his phone to the passenger to call for help while he went to assist the driver, the statement said.

&ldquo;Moments before the car burst into flames, George pulled the driver to safety,&rdquo; it said.

&ldquo;Luckily I was there. I am glad to be able to have assisted,&rdquo; George &mdash; a Seattle resident and a Blackhawk helicopter crew chief with the 2nd Combat Aviation Brigade &mdash; was quoted as saying.

&ldquo;It&rsquo;s very typical of Sgt. 1st Class George to assist those in need on or off duty without hesitation.&rdquo;

Details about the driver&rsquo;s condition were not immediately available.