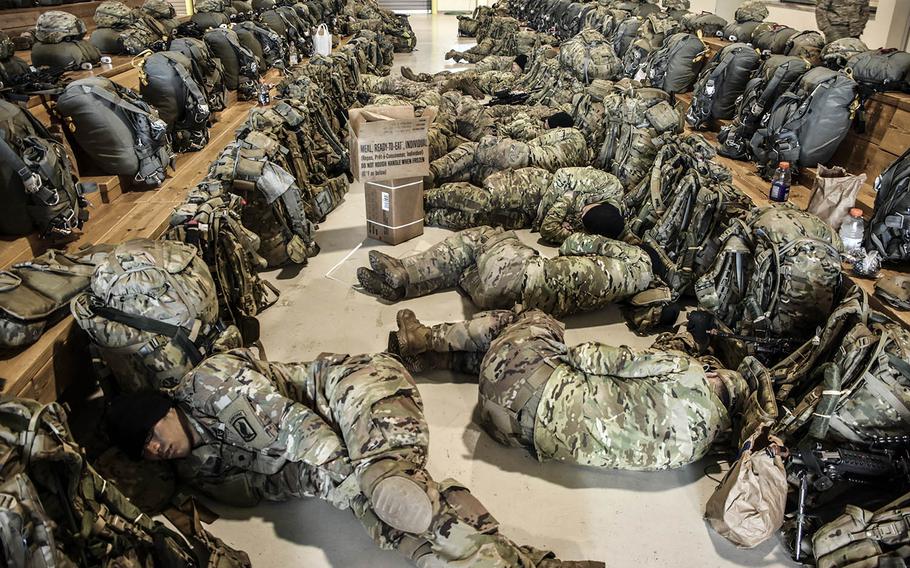 Paratroopers from the 173rd Airborne Brigade catch up on their sleep after working through the night to prepare for a combat equipment jump in Italy, April, 17, 2018. (John Hall/U.S. Army)

Sleep deprivation hinders military readiness, yet service members are twice as likely as civilians to experience it, according to a recent Defense Department report.

The “Study on Effects of Sleep Deprivation on Readiness of Members in the Armed Forces,” published Feb. 26, said sleep deprivation “may be the most important biological factor that determines service member health and combat readiness.”

The report was compiled by Acting Assistant Secretary of Defense for Manpower and Reserve Affairs Virginia Penrod after a comprehensive review of relevant scientific studies, several of which indicated that 64% of service members lack enough sleep compared to 28-37% of civilians.

Congress required the Pentagon to produce the report as part of the 2020 National Defense Authorization Act. Lawmakers’ interest in sleep-deprivation stems from earlier reports that showed it factored into two separate collisions in 2017 between U.S. destroyers and commercial vessels that killed 17 sailors. Those studies found watch standers experienced poor sleeping patterns and exhaustion before both accidents.

Seven sailors died in June 2017 when the USS Fitzgerald collided with a Philippine container ship; two months later, 10 sailors died when the USS John S. McCain ran into a Liberian merchant vessel. Both destroyers sustained millions of dollars in damages.

In response, the Navy changed its policy on duty schedules to accommodate better circadian rhythms, but “anecdotal feedback” indicates the policy is not always followed, Adm. William Moran, at the time the vice chief of naval operations, told Congress in 2019.

While military work is not always conducive to sleep, that’s not the only reason service members are missing important snooze time, according to the study. The armed-forces culture devalues rest.

“Attitudes toward sleep may range from viewing sleep as a controlled ration to asserting that the need for sleep is a sign of weakness,” the report said.

The report suggested the Pentagon create policy to promote a culture of prioritizing sleep. The change must happen from the top-down, according to the report, as “leadership plays a significant role in whether service members in a given unit experience partial sleep deprivation.”

According to the report, “Army surveys indicate that only 26 percent of leaders encourage service members to get adequate sleep.”

But while sleep is crucial, it’s not always compatible with mission needs. In these circumstances, the report’s authors suggested “tactical naps” when sleep deprivation is operationally necessary.

These planned naptimes should last about 20 minutes and happen about two-thirds of the way through a period of sleep deprivation. To avoid post-nap grogginess, researchers found chewing about 100 milligrams of caffeinated gum can help.