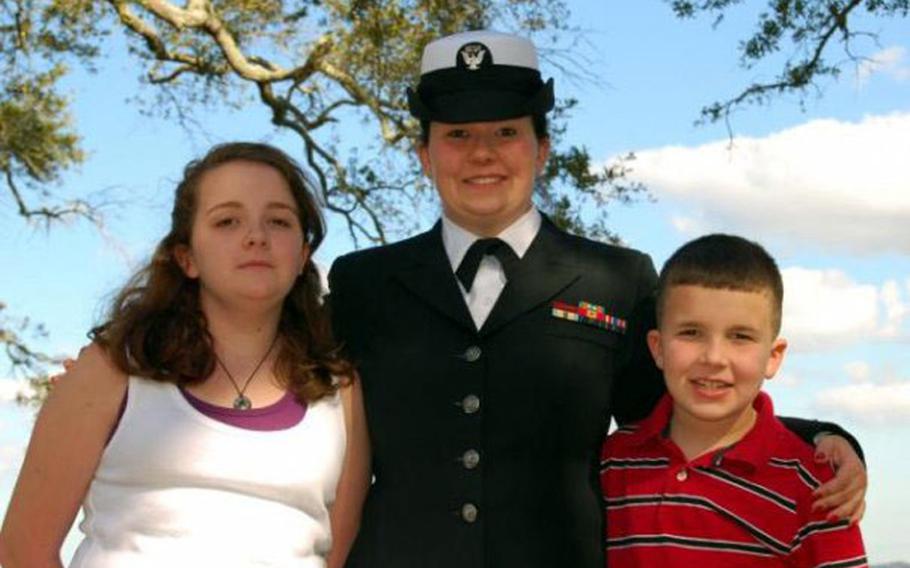 Petty Officer 1st Class Angela McCabe, seen here in 2008 with her children, Rebecca, now 15, and JJ, now 11, is fighting for custody of her children after returning to Naval Air Station Jacksonville, Fla., in April from a deployment to Cuba. (Courtesy of Angela McCabe)

YOKOTA AIR BASE, Japan &mdash; &ldquo;Jane&rdquo; can cope with missing her son&rsquo;s birthday and his first day of school while she&rsquo;s deployed to Afghanistan.

What keeps the divorced servicemember up nights in dangerous Helmand province is the prospect of calling home one day to discover that her ex-husband has taken the boy.

&ldquo;It scares the hell out of me,&rdquo; said Jane, who remains in Afghanistan until October.

The law gives him every right to do so. Although her former husband has not seen their child in nearly three years, she said, they share custody, giving him a legal justification to assume guardianship while she&rsquo;s away.

Jane left her son with her parents when she deployed in May. Against the advice of her attorney, she told her ex-husband of the arrangement just days before deploying, and that&rsquo;s when he threatened to take the boy away during her deployment.

Stars and Stripes agreed to protect her identity because she has not disclosed the situation to her commanders for fear it could jeopardize her deployment.

Jane&rsquo;s case epitomizes a problem the Pentagon aims to curb with new rules for troops who are single parents or who are raising their children with a new spouse. The intent is to reduce personal stressors that can distract troops from their missions, but legal experts say it can be a landmine that could blow up on families with unintended consequences.

A policy the Pentagon issued May 7 requires single and remarried military parents with full or joint custody to &ldquo;attempt to gain consent&rdquo; from the other biological parent before leaving a child in the care of a third party, such as a grandparent or stepparent.

The policy is part of the mandatory &ldquo;family care plans&rdquo; that troops must craft before deployment, spelling out arrangements for dependents&rsquo; guardianship and financial and medical care. Until now, the plans had never addressed the consent issue and had been required only for single military parents and for dual-military couples.

However detailed, they are not legal documents, and the military advises troops to solidify the plans with court orders. Should a servicemember be unable to get the consent of their ex-spouse, they must document it and consider legal recourse in court, the policy states.

The goal is to nip in the bud some of the custody issues that can arise when troops deploy, Aggie Byers, a senior program analyst in the Office of Family Policy/Children and Youth at the Pentagon, said in an e-mail to Stars and Stripes.

Gaining consent from noncustodial parents in family care plans is not legally binding, but it can strengthen a servicemember&rsquo;s case in court should litigation be unavoidable in the future, Byers said.

&ldquo;It will at least show the intent of the parties at the time it was drawn,&rdquo; said Don Guter, a retired rear admiral and former Navy judge advocate general. &ldquo;It should work, though I don&rsquo;t know it&rsquo;ll work in absolutely every case.&rdquo;

Echoing military officials, Guter, now president of the South Texas College of Law in Houston, said the only way agreements in family care plans can pass legal muster is if they are buttressed by court orders.

The Pentagon has no handle on the exact number or nature of the custody battles troops face before, during and after deploying, according to a Pentagon report released in May. Some legal experts and advocates contend there are hundreds of cases, and several servicemembers have written Stars and Stripes about a variety of custody complications related to deployments.

Still, Jane said, forcing troops like her to gain the consent of their ex-spouses won&rsquo;t reduce the risk that they could change their minds and purposely complicate matters just before troops deploy. Others agree the new policy will only exacerbate custody dilemmas for troops.

Tully believes the initiative will backfire and fuel the ire of relationships gone sour.

Another such critic is Petty Officer First Class Angela McCabe, a hospital corpsman stationed at Naval Air Station Jacksonville in Florida. She and her ex-husband, John Kaneaster, agreed in her family care plan that the children would move to his home in Chapman, Kan., for the 2009-10 school year and then return to Florida when she got home from a six-month deployment to Guantanamo Bay, Cuba.

But Kaneaster, a military retiree, sought full custody while she was gone, and a Kansas judge granted it, at least temporarily, while the case is fought in court.

&ldquo;I thought [the family care plan] would give me some protections. But the judge just ignored it,&rdquo; said McCabe, 37. &ldquo;I lost custody while I was deployed, and there&rsquo;s nothing I can do about it.&rdquo;

Kaneaster, 46, said issues with the children stemming from McCabe&rsquo;s care surfaced while she was away and that he is pursuing full custody &ldquo;because it&rsquo;s in the best interest of the children.&rdquo;

The new family care plan requirements also apply to those leaving the home for extended periods for training or school and to the civilian expeditionary workforce, a subset of Defense Department employees who frequently deploy.

The collection and enforcement of family care plans differ from service to service, but failure to submit one before deploying can result in administrative action or dismissal from the military.