Six B-1 and B-2 bombers conduct simultaneous missions over Sea of Japan, Indian Ocean 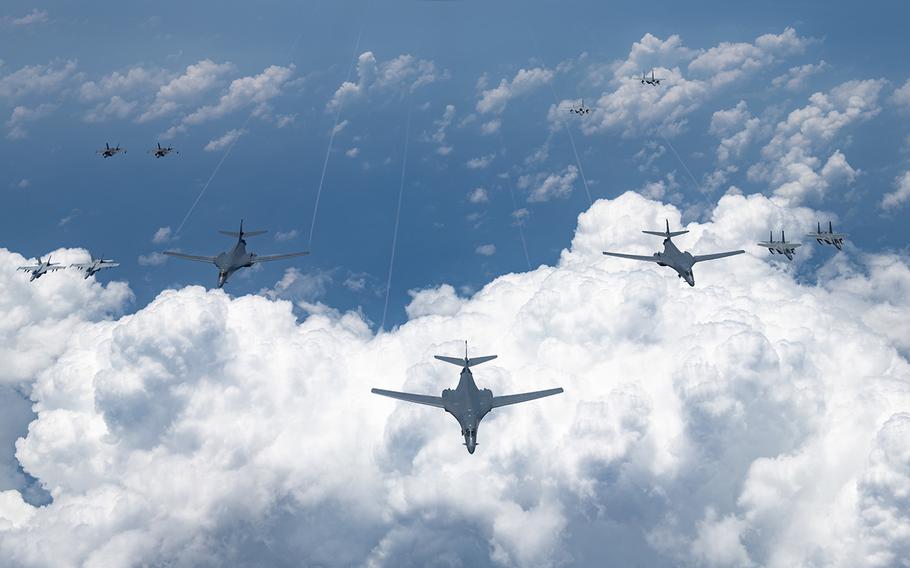 Two B-1 Lancer bombers departed from Dyess Air Force Base, Texas, to the Sea of Japan, where they linked up with the Japan Air Self-Defense Force, the Air Force said in a statement Wednesday.

They were joined by another pair of B-1s that flew in from Andersen Air Force Base, Guam.

Meanwhile, two B-2 Spirit stealth bombers deployed to Naval Support Facility Diego Garcia flew on Tuesday to the Indian Ocean for joint tactical training, according to the statement, which did not specify the forces involved. The B-2s are home stationed at Whiteman Air Force Base, Mo.

“Our unique strength as an Air Force is our ability to generate integrated actions with our joint teammates and allies and partners to challenge competitors in a time and place of our choosing,” Gen. Ken Wilsbach, who assumed command of Pacific Air Forces last month, said in the statement. “These simultaneous airpower missions demonstrated our capacity and readiness to deliver a wide range of proactive, scalable options to quickly deploy our forces to support our mission of ensuring a free and open Indo-Pacific theater.”

During their flights, the B-1 bombers were joined by four F-15C Eagles from Kadena Air Base on Okinawa. Together, those aircraft rendezvoused with the USS Ronald Reagan strike group, F-35 Lightening IIs assigned to Marine Corps Air Station Iwakuni, Japan, and F-15J fighters from the JASDF to conduct large-scale training in the Sea of Japan, which is also known as the East Sea.

Combined with aircraft from the Air Force, Navy and JASDF, the F-35 creates “a very strong capability,” he said by email.

The F-35Bs provided escorts for the Lancers and trained in counter-air defense with the other fighters in the exercise, Berhmann said, according to the email.

“Staff members from each participating unit, including our Japanese allies, collaborated throughout the planning and execution phases of this event and continued to build upon our collective interoperability,” according to the email.

“Marine tactical aircraft,” he said, “allows us to demonstrate the advantages created by our own unique capabilities and support these important assets.

Coordinating two operations across thousands of miles of air and sea between three separate services and two nations demonstrates “our unwavering commitment to regional defense agreements with our allies and partners,” Rear Adm. George Wikoff, commander of the Ronald Reagan Carrier Strike Group, said in the Air Force statement.

The combined exercise Tuesday, one of several like it this year, comes as military activity in the Western Pacific by the U.S. and its allies and by China continues to ratchet up.

The Chinese held recent exercises near the Taiwan Strait, along with a live-fire exercise Sunday by one of its warships in the South China Sea.

The U.S. on Tuesday sent a destroyer through the Taiwan Strait to demonstrate freedom of navigation and on Saturday conducted flight exercises off the aircraft carrier USS Ronald Reagan in the South China Sea.