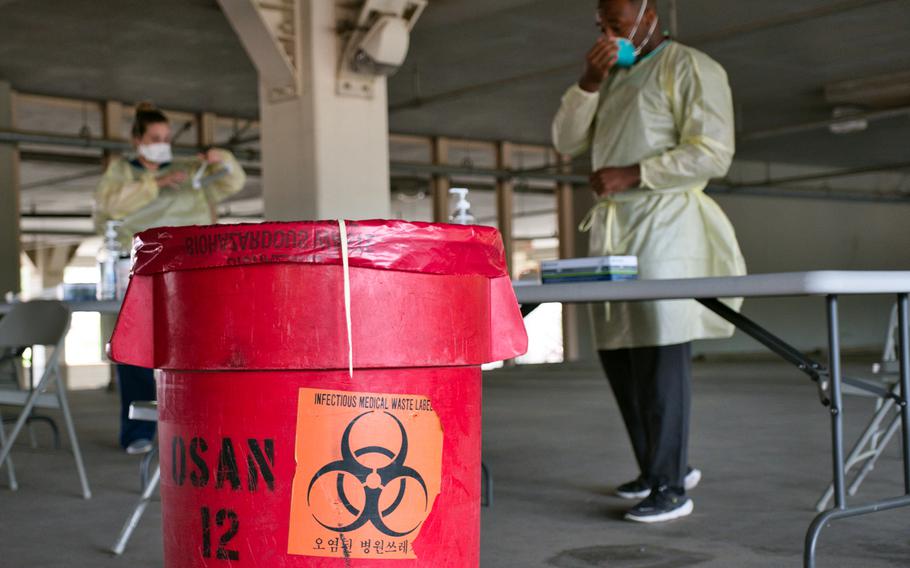 The announcement came as South Korea has flattened the curve of infections while continuing to battle cluster infections and imported cases, including those linked to USFK. The Korea Centers for Disease Control and Prevention reported 23 more cases on Monday, and only three of those were local transmissions.

Five of the infected service members arrived at Osan Air Base on government-chartered fights from the United States on July 19, 20 and 28, USFK said in a press release.

The other two landed at Incheon International Airport on commercial flights, it added. USFK didn’t say where those flights originated.

All seven were transferred to an isolation facility designed for coronavirus patients on Camp Humphreys, the main Army base in South Korea, the command said.

Following the South Korean government’s lead, USFK has implemented a strict testing and two-week quarantine program aimed at preventing the spread of the virus from other countries.

All but 24 of the USFK cases have been caught in that process, with the command reporting its last local transmission in mid-April.

Only two of the latest patients tested positive in their first test after arriving. The other five tested positive on the second test required to exit quarantine, according to the press release.

USFK health professionals determined the need for contact tracing was limited since all arrivals to South Korea are quarantined and the patients had no contact with anybody on-base or in the local communities, it added.

All transportation assets and occupied quarantine rooms they had occupied also were thoroughly cleaned, it said.