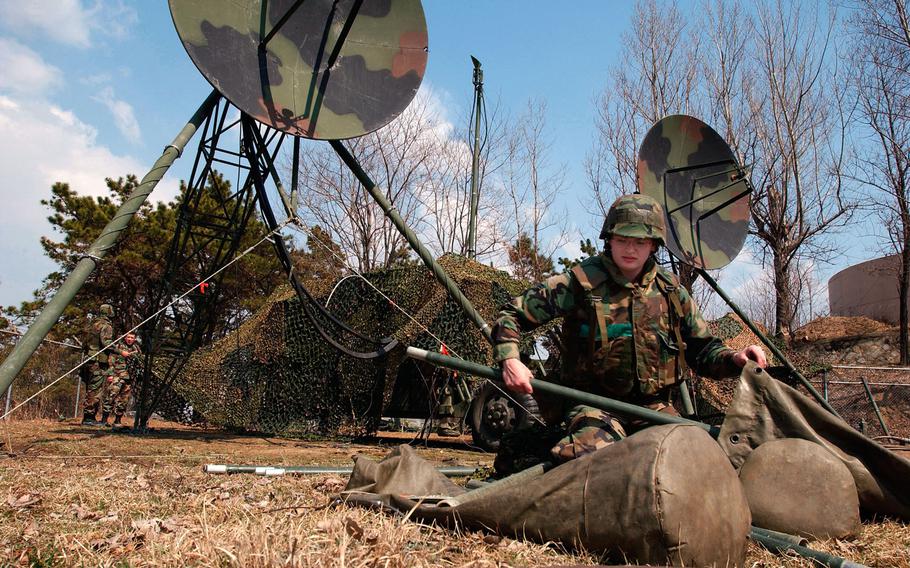 Airman 1st Class Leah Fisk builds a camouflage cover for a tactical communications system on March 18, 2014, in preparation for Foal Eagle, an annual U.S-South Korean military exercise. On Jan. 22, 2015, South Korea's defense ministry said the spring drills will go on as planned despite North Korea's call to cancel them in exchange for its pledge to suspend nuclear testing. (Suzanna M. Jenkins/U.S. Air Force)

SEOUL, South Korea — South Korea’s defense ministry said Thursday that annual joint spring drills with the U.S. will proceed as planned, despite North Korea’s call to cancel them in exchange for its pledge to suspend nuclear testing.

It was unclear how the decision to go ahead with the Foal Eagle field training and Key Resolve command post exercise would affect Seoul’s call for the two Koreas to hold their first summit since 2007.

“These are the annual exercises for the defense of the Republic of Korea,” a Ministry of National Defense spokesman said, speaking on customary condition of anonymity. “Therefore, we need to hold them, and North Korea will need to return quickly to meaningful conversation which could reach real progress in denuclearizing North Korea.”

Washington and Seoul tout the two exercises as defensive in nature, but they routinely draw condemnation and threats from the North.

Approximately 12,700 U.S. troops — about half from outside the peninsula — and more than 200,000 South Korean troops took part in last year’s exercises, as well as a number of U.S. naval and air assets from outside South Korea. Details for this year’s drills, which the MND said will begin in early March, have not been announced.

U.S. Forces Korea did not respond Thursday to a question about whether it was considering canceling or scaling back the exercises in response to the North’s offer but said in a statement that they “do not reflect any real-world or current events.”

During the 1990s, the U.S. and South Korea canceled the major Team Spirit exercise several times as encouragement for the North to end its nuclear weapons program.

North Korea has carried out three increasingly powerful nuclear tests, the most recent coming two years ago. It successfully launched a multistage rocket in December 2012 and has threatened to attack South Korea and the U.S. mainland.

David Garretson, a Seoul-based professor of international relations at the University of Maryland University College, said both sides seem to sense there is an opportunity for talks to take place. While he doesn’t think the U.S. and South Korea will cancel the exercises, they might downplay them.

“North Korea’s proposal is, we won’t have a test if you don’t hold the exercise, and of course that’s not going to happen,” he said, adding that the North doesn’t seem to be making as much noise about the drills as usual.

He added that the exercises are “part of the U.S. and the ROK saying that we are firm in our defense commitments to each other and we need to do this training so we can defend the South against the North. From our point of view, we’ll always take that position.”

But, in a climate where talks are a possibility, he said the U.S. and South Korea could scale back the drills in size or publicity. The U.S. could also bring fewer outside assets than in previous years.

“That would be another indicator on our side of playing it down, without saying we’re not going to have an exercise at all,” he said.