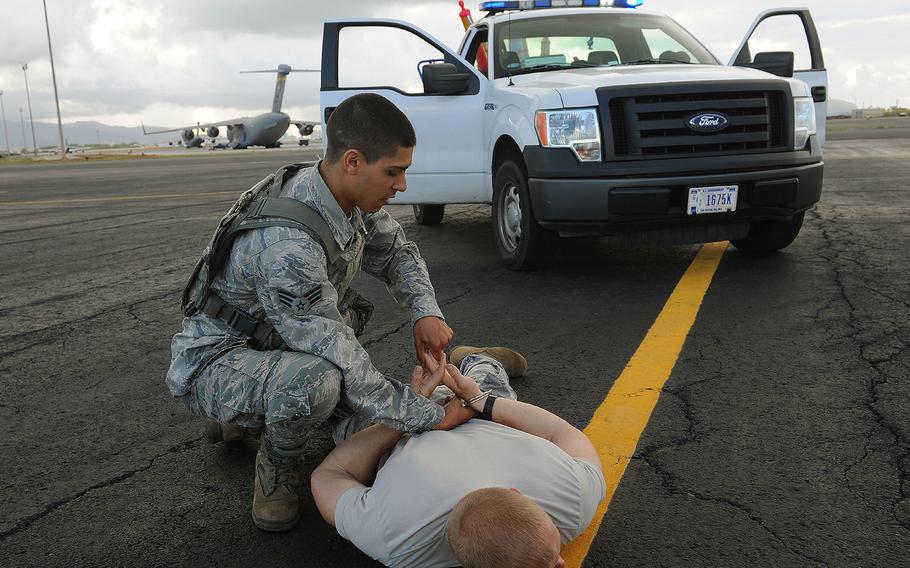 An airman with the 647th Security Forces Squadron apprehends a mock trespasser during an exercise at Joint Base Pearl Harbor-Hickam, Hawaii, March 9, 2013. (Jerome Tayborn/U.S. Air Force)

FORT SHAFTER, Hawaii — The commander and chief master sergeant heading security forces at Joint Base Pearl Harbor-Hickam were removed from their positions Tuesday for fostering a toxic work environment.

Lt. Col. Christopher Robinson and Chief Master Sgt. Justin Crockett of the 647th Security Forces Squadron were “relieved following an investigation which revealed failures in leadership that led to a toxic work environment,” Staff Sgt. Nicholas Brown, a 15th Wing spokesman, said in a statement provided to Stars and Stripes on Thursday. The wing has oversight of the security forces.

Both men have been reassigned, he said.

Col. Tammie Harris, the 647th Air Base Group commander, relieved Robinson, who took command in July 2018, “for lack of confidence in his ability to effectively command,” while Crockett was removed “for his role in creating a toxic work environment,” Brown said.

“Harris determined the command team did not take appropriate actions to enable and grow the appropriate organizational culture across all levels within the squadron,” he said. “The investigation will not be released at this time to protect the privacy and due process rights of the airmen involved.”

Another base official, who had knowledge of the matter but was not authorized to speak publicly, said Crockett had created “issues with morale or disrespecting personnel — either superiors or those under his supervision.”

The 647th is composed of Navy and Air Force service members, civilians and contractors, but the base does not publicly release their number.