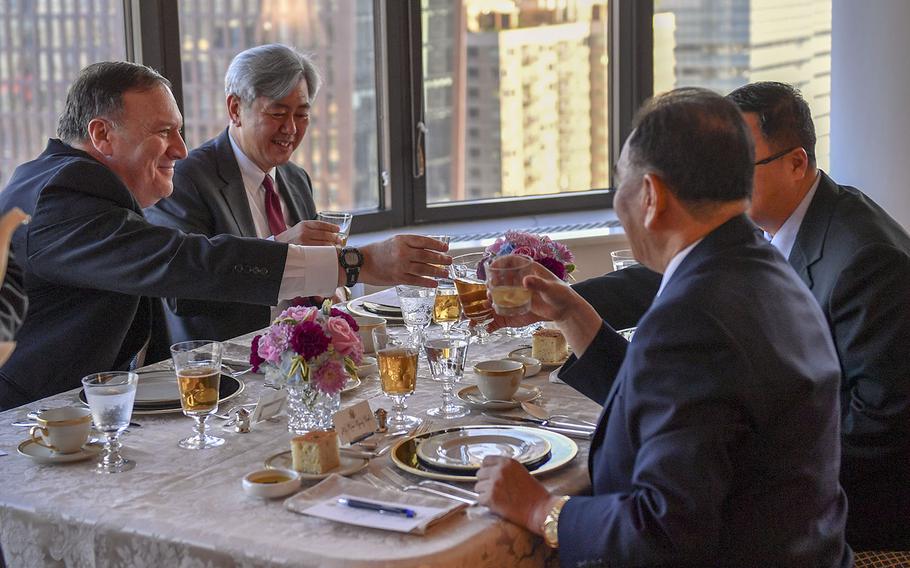 The tempered expectations were markedly different from the optimistic tone set by Trump in a series of tweets earlier in the day.

“There’s no longer a Nuclear Threat from North Korea,” the president wrote, a day after his landmark summit with Kim Jong Un in Singapore.

Trump is gambling that his administration has set the stage for future negotiations to persuade the young leader to agree to the complete, verifiable and irreversible dismantling of the North’s nuclear program.

Secretary of State Mike Pompeo laid out an ambitious timeline for the North’s denuclearization, saying the administration wants the communist state to take major steps toward nuclear disarmament in the next two and a half years.

“We’re hopeful we can get it done. There’s a lot of work left to do,” he told reporters after landing in Seoul.

He met with Gen. Vincent Brooks, the top commander of U.S. Forces Korea, and was due to brief South Korean President Moon Jae-in on Thursday.

Pompeo said Kim understands that “there will be in-depth verification” included in any nuclear deal with Washington.

Trump and Kim signed a joint statement committing to work toward the “complete denuclearization of the Korean Peninsula, hailing it as turning point after decades of hostilities between the two countries.

While many welcomed the agreement as a key step in a process that has tamped down tensions, critics pounced on the fact that the document contained few specific measures.

“While no one exchanged insults or angry tweets … there was very little to point to in terms of substantive or concrete progress coming out of the summit,” Paul Haenle, the director of the Carnegie-Tsinghua Center for Global Policy, said in a commentary.

Trump also drew concern from lawmakers and allies after he announced he was suspending joint war games that are held regularly with the South Koreans as talks continue. He called them “provocative” and expensive.

“We save a fortune by not doing war games, as long as we are negotiating in good faith - which both sides are!” he tweeted on Wednesday.

“It’s not a burden onto the American taxpayer to have a forward deployed force in South Korea,” Graham told CNN.

“It brings stability. It’s a warning to China that you can’t just take over the whole region. So I reject that analysis that it costs too much, but I do accept the proposition, let’s stand down (on military exercises) and see if we can find a better way here.”

Pompeo tried to soothe concerns among allies, saying Wednesday he was there when Trump discussed the issue with Kim. The president “made it very clear” that the condition for the freeze was continued “productive, good-faith negotiations,” according to the former CIA chief.

“At the point that it’s concluded they are not, the president’s commitment to not have those joint exercises take place will no longer be in effect,” he said.

Trump has placed heavy weight on his burgeoning personal relationship with Kim, saying he can succeed where past administrations have failed amid decades of false starts in negotiations with the North.

His tweets seemed to ignore the North’s estimated stock of some 60 nuclear weapons and the fact that it test-fired three intercontinental ballistic missiles last year.

“Just landed - a long trip, but everybody cannot feel much safer than the day I took office,” he wrote. “There is no longer a Nuclear Threat from North Korea.”

But signs of disagreement were emerging as the two sides appeared to differ over fine points of Tuesday’s nearly five-hour meeting.

The two men were all smiles and handshakes as they met at a hotel on Singapore’s Sentosa Island in the first-ever summit between a North Korean leader and a sitting U.S. president.

Photos of them standing side-by-side were splashed across the front pages of newspapers around the world, including North Korea. It was a stunning sight after they spent most of last year trading personal insults and threats of nuclear war.

North Korea’s state-run news agency ran a rare, detailed report about Kim’s travels and cast the agreement as a series of concessions from Trump.

The Korean Central News Agency said the decision to halt joint military exercises was a move to end “hostile and military” actions against each other to achieve peace and stability on the peninsula “and realize its denuclearization.”

It also claimed the president had agreed to lift economic sanctions and “abide by the principle of step-by-step and simultaneous action” in the peace process.

Trump told reporters after the summit Tuesday that punishing sanctions against the North would remain in effect until denuclearization is achieved.

Pompeo played down the North Korean report, saying “one should heavily discount some things that are written in other places.”

The annual joint military exercises have long been a flashpoint for tensions with the North, which considers them a rehearsal for an invasion.

U.S. military commanders insist the drills are defensive in nature and necessary for readiness.

Kim told the president “it is urgent” to make a “bold decision on halting irritating and hostile military actions against each other,” according to KCNA.

Trump understood that and “expressed his intention to halt joint U.S.-South Korean military exercises,” it said.

South Korea signaled that it will support Trump’s surprise decision to suspend joint military exercises, which the allies have long insisted are crucial to their defensive posture.

But Seoul also said it was still trying to understand “the exact meaning and intention” of Trump’s remarks.

The first major test will come in August, when the next major exercises known as Ulchi Freedom Guardian are scheduled to be held.

She noted that military exercises also were canceled in the early 1990s during previous talks with the North.

“U.S.-(South Korean) military exercises have historically been used as both a carrot and stick,” she said in an email. “It’s worth exploring our options to adjust military exercises in order to meet not only security, but also diplomatic goals.”

Pompeo also was to hold a trilateral ministerial meeting to brief Seoul and Japan in Seoul before flying to China.

Japan, which has 50,000 U.S. servicemembers stationed on its territory, expressed concern.

“The U.S.-South Korean exercises and U.S. forces in South Korea play significant roles for the security of East Asia,” Japanese Defense Minister Itsunori Onodera was quoted as saying by the Kyodo news agency.

Lucas Tomlinson, a Pentagon reporter for Fox News, tweeted Tuesday that U.S. officials told him that joint military training with the United States will continue in Japan and that nuclear-capable B-52 training flights will still fly out of Andersen Air Force Base on Guam.

Japan hosts about twice the number of U.S. troops as South Korea, and about 60 U.S. ships are forward deployed in the nation.

South Korean troops also train side-by-side with Americans in the region’s two largest exercises, the annual Cobra Gold in Thailand and biennial Rim of the Pacific naval drills that are to begin later this summer in Hawaii.