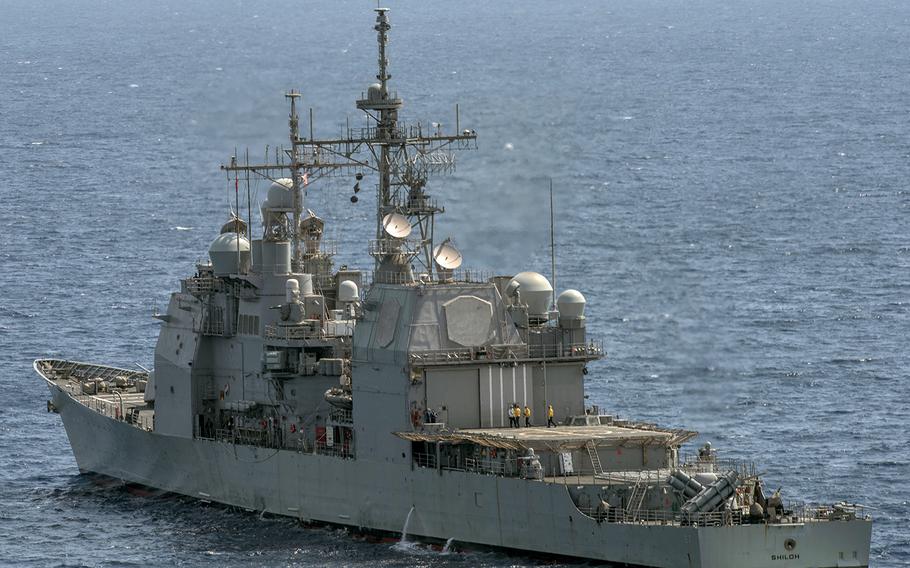 The USS Shiloh patrols the waters south of Japan on May 22, 2017. (Navy Media Content Services)

YOKOSUKA NAVAL BASE, Japan — U.S. and Japanese navy ships are searching for a USS Shiloh sailor who went overboard Friday during routine operations near Okinawa.

The incident happened about 9:30 p.m., a Navy statement said. The guided-missile cruiser’s crew members conducted multiple searches of the ship but were unable to find the missing sailor, whose name is being withheld during the search.

The ship was roughly 180 miles east of Okinawa when the sailor went missing, the statement said.

This is the second Navy sailor to go overboard this week. On Tuesday, Petty Officer Christopher Clavin of the USS Normandy was reported missing while the ship trained off the North Carolina coast.

Navy and Coast Guard ships spent nearly 76 hours and covered 6,300 square miles of ocean looking for Clavin before calling off the search on Friday, a separate Navy statement said.

The Shiloh is homeported at Yokosuka Naval Base, Japan.