Sailors back home in Sasebo as minesweeper remains stuck on reef 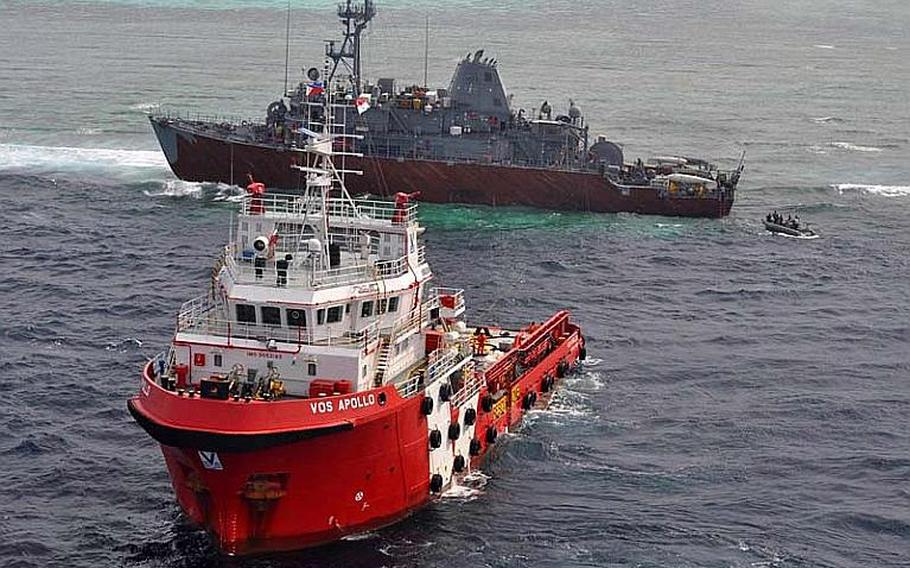 Malaysian tug Vos Apollo prepares for defueling operations near the grounded USS Guardian on Jan. 24, 2013, while a U.S. Navy small boat approaches with a salvage team. The U.S. Navy contracted Vos Apollo to assist with removing fuel from the mine countermeasures ship, which ran aground on the Tubbataha Reef in the Sulu Sea on Jan. 17. No fuel has leaked since the grounding and all of the approximately 15,000 gallons onboard Guardian was safely transferred to Vos Apollo during two days of controlled defueling operations on Jan. 24 and Jan. 25. (Geoffrey Trudell/U.S. Navy, Flickr)

SASEBO NAVAL BASE, Japan — Most USS Guardian sailors returned to their families Monday as the Navy continued salvage operations on their stricken minesweeper.

Navy officials would not speculate on the crew’s future with the ship still stuck on Tubbataha Reef, a World Heritage Site off the coast of the Philippines. But they will remain together in Sasebo, their homeport, under their commanding officer, Lt. Cmdr. Mark Rice, and will train for “potential assignments” until further notice, CTF-76 commander Rear Admiral Jeffrey Harley told Stars and Stripes.

Rice and other technical experts off the ship remained on U.S. vessels near the Guardian to assist in salvage efforts.

“The salvage plan will determine the way ahead,” Harley said, referring to potential repair plans for the grounded minesweeper and future tasking for its crew. “It’s been a very special homecoming.”

Harley said the Sasebo community had rallied around the sailors and made mental health and family support services available to them.

No one was injured when the Avenger-class ship ran aground around 2:25 a.m. on Jan. 17 while transiting the Sulu Sea after a port visit in Subic Bay. The Guardian’s crew of 79 was removed the next day as a safety precaution.

On Friday, the U.S. Navy and their Philippine counterparts finished removing 15,000 gallons of fuel from the ship.

“Every hazard to the environment, we’ve been able to take off the ship,” Harley said. “We’ve transitioned from the crisis phase to stabilization.”

An investigation into the cause of the grounding is ongoing. Navy officials have said the ship could remain trapped on the reef for as much as two more weeks while they await the arrival of two contracted heavy-lift ships from Singapore. In the meantime, Harley said the Navy is looking at what effects being down one forward-deployed mine countermeasure ship might have on operations in the Pacific.

“Given the circumstances, I am very impressed at the way Guardian sailors came together and utilized their training, fighting to save the ship,” Petty Officer 2nd Class Jeffrey Macatangay — a damage controlman off the Guardian — said in a CTF-76 Amphibious Force 7th Fleet statement Monday. “We are very thankful for the support and assistance we received from all those involved in bringing us home safely.”