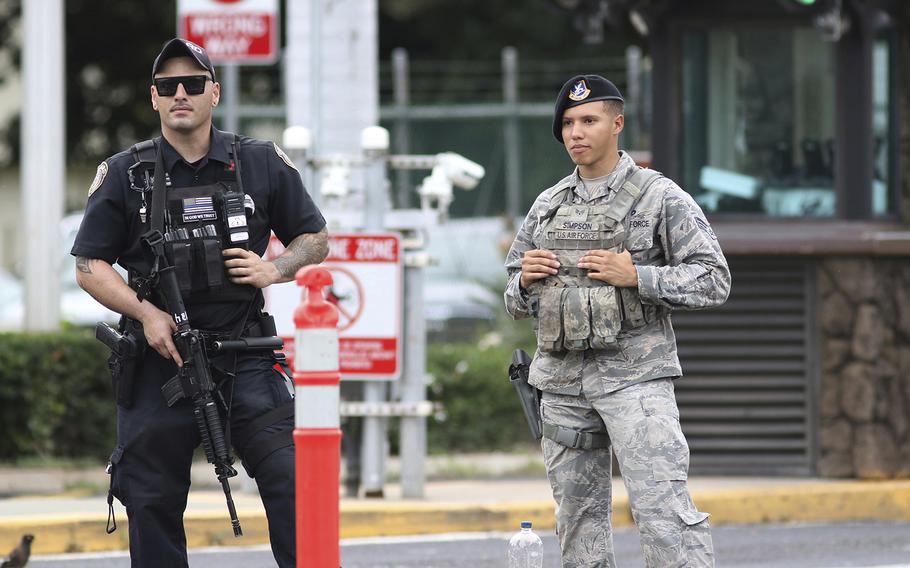 FORT SHAFTER, Hawaii — The sailor who shot and killed two men and then himself Wednesday at a Hawaii naval shipyard had been disgruntled with his commanders, according to a media report. The shooter, identified Friday by the Navy as Gabriel Antonio Romero, 22, had been unhappy with commanders and was undergoing counseling, The Associated Press reported Friday, citing an unnamed military source.

He faced nonjudicial punishment, a form of administrative discipline for misconduct, the AP reported. The shooting at Pearl Harbor Navy Shipyard is still under investigation.

Romero was assigned to the USS Columbia, a Los Angeles-class attack submarine, as a machinist’s mate auxiliary fireman, the Navy said. He was a native of Texas and enlisted in December 2017. He was trained at the Navy Submarine School in Groton, Conn., and reported to the USS Columbia in June 2018, the Navy said. The submarine, which homeports at Pearl Harbor, was in a shipyard dry dock for routine maintenance. Killed in the shooting were Roldan Aguinaldo Agustin, 49, of Ewa Beach, and Vincent J. Kapoi Jr., 30, of Honolulu, according to the Honolulu Medical Examiner’s Office. Kapoi worked at the shipyard as a metals inspector apprentice, the Navy said in statement. Agustin was a shop planner, the Navy said. He served in the Navy and retired from the Army National Guard before taking a job at the shipyard, the AP reported. A third shooting victim, a 36-year-old man, remains hospitalized in stable condition. In a Facebook posting for employees Thursday evening, shipyard commander Capt. Greg Burton said the shooting “changed the history of our beloved shipyard,” which was key in getting the Pacific Fleet up and repaired after the Dec. 7, 1941 surprise attack by the Japanese. “We must take time to process what happened and how it impacts each of us,” he said. “From the deck plate up through our entire workforce, we are all deeply affected, including myself. I am trying to process this event just like each of you – I am no different.” Burton advised employees that the shipyard is taking measures “to prevent this situation from happening again.” Shipyard employees returned to their normal work schedules Friday. A strip of grass near one of the shipyard buildings has been set up as a temporary location for memorials by employees. The shooting will not affect Saturday’s 78th commemoration of the Dec. 7 surprise attack, which is being hosted by the National Park Service at the Pearl Harbor Visitor’s Center, located adjacent to Joint Base Pearl Harbor-Hickam. Jay Blount, a spokesman for Pearl Harbor National Memorial, said additional security measures would not be necessary because that is done as a matter of course for the ceremony every year. olson.wyatt@stripes.com Twitter: @WyattWOlson