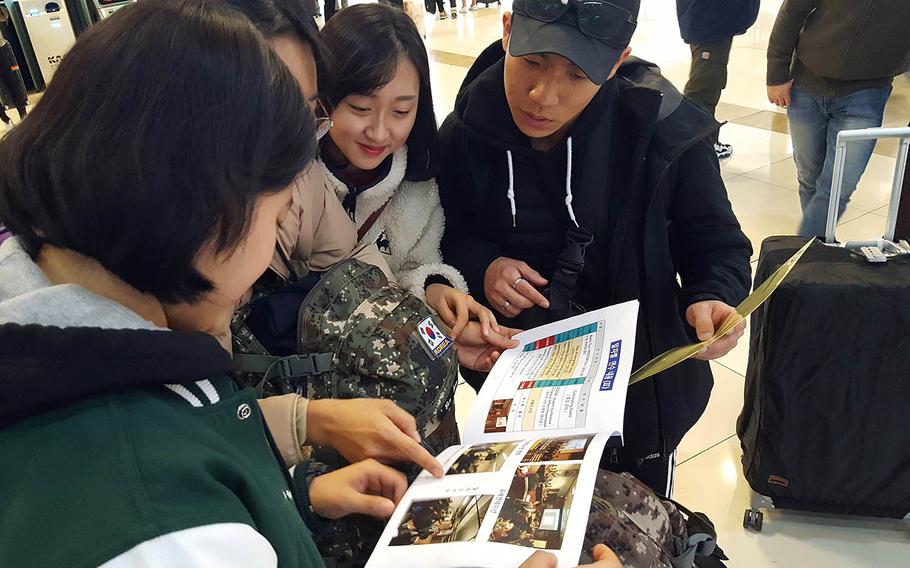 South Korean ROTC cadets look at a pamphlet about their itinerary before leaving Seoul to participate in a monthlong leadership development course at Texas A&M University. (Courtesy of the South Korean military)

The university in College Station, Texas, has been hosting students from the allied nation annually in the program since 2014 and boasts one of the best Reserve Officer Training Corps programs in the nation.

The 40 cadets will gain a global perspective and training in day-to-day skills such as roll call, physical training and overcoming obstacles as well as tactics and operation orders. They also will tour the Alamo in San Antonio and a veterans’ memorial park “to understand the role, sacrifice and responsibility taken by the U.S. military during the Korean War,” according to a press release from the South Korean military.

The class, which was selected from universities nationwide according to proficiency in English, military expertise, grade-point average and physical fitness, will return on Feb. 24. The program has mandated that women fill 10 percent of the slots.

The United States maintains some 28,500 servicemembers in South Korea, which remains technically at war with the North since their 1950-53 conflict ended in an armistice instead of a peace treaty.

Lee Won-wook, a student at Seoul National University, was quoted as saying he was ready to work hard and was looking forward to being transformed into “an exemplary cadet.”