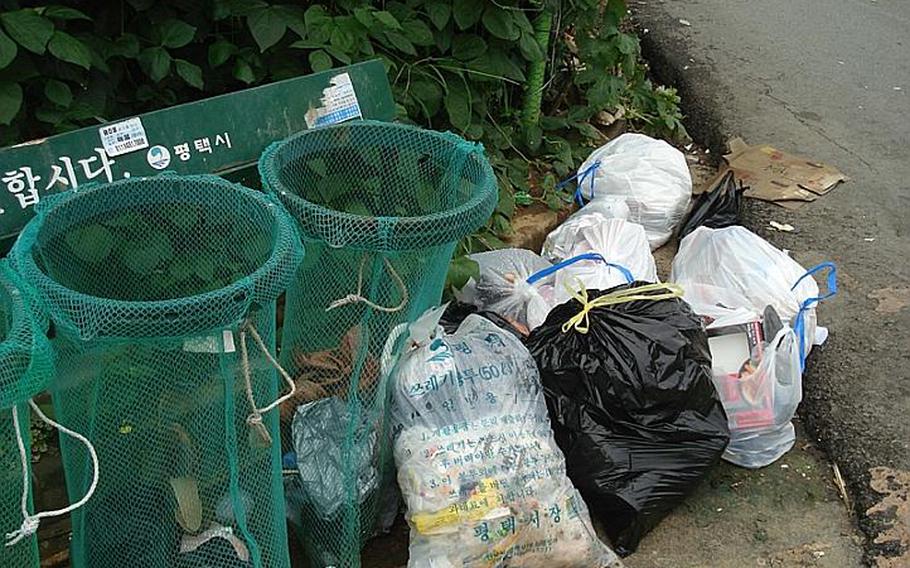 At a trash disposal point near Camp Humphreys in Pyeongtaek, South Korea, authorities found trash in bags of the type sold or dispensed at U.S. military commissaries, rather than the type of bags required by Korean law. Authorities believe some U.S. servicemembers and civilians who live in local housing outside U.S. military installations have been routinely violating Korean trash disposal laws. (Courtesy to Stars and Stripes)

Violators are failing to use the trash bags required by Korean law and are not sorting recyclable items as required, the officials said.

The problem is occurring in communities where numbers of U.S. military personnel live off base. Those include Uijeongbu, Dongducheon, Seoul, Pyeongtaek, Waegwan and Daegu, but it's been especially frequent in Pyeongtaek and Waegwan, said Lee Min-hyon, manager of Pyeongtaek City&rsquo;s waste management division.

Most off-base residents comply with the law, but others are continual offenders.

They appear most pronounced in Pyeongtaek, where there are two major U.S. installations: Camp Humphreys and Osan Air Base.

Pyeongtaek officials said they&rsquo;re especially concerned because the bulk of U.S. forces are slated to eventually be stationed at Camp Humphreys.

The maximum fine for violating Korean trash disposal laws is 1 million won, or about $845 at current exchange rates. Officials in Pyeongtaek said they have not compiled statistics on violations or attempted to identify or fine individual offenders because it would be time-consuming and otherwise difficult. But they said they&rsquo;ve determined that U.S. servicemembers are among offenders because the refuse bags and much of their content are items sold at U.S. commissaries. Korea&rsquo;s regulation trash bags are biodegradable and specially marked, while black plastic garbage bags some violators have been using, are not, officials said.

They said violations drive up local trash collection costs, increase the municipal workload, pose damage to the environment, deprive the government of recyclable resources, and raise the appearance that U.S. military personnel stationed in South Korea are flouting host-nation laws with impunity.

Pyeongtaek authorities said they&rsquo;ve been stymied in their efforts to obtain compliance &mdash; which have mostly involved posting English-language flyers and trying to send officials to the homes of servicemembers.

&ldquo;It may be more effective if it were done by the U.S. military,&rdquo; said Lee Min-hyon, the waste management division head.

David Frodsham, deputy to the Humphreys garrison commander, said first sergeants and commanders will be directed to make trash disposal a topic at one of the training sessions they hold weekly, after a major training exercise concludes this week.

In addition, information on trash disposal will be run in the weekly Morning Calm newspaper the Army publishes for its Korea installations, and new-arrivals will be given briefings along with written instructions on trash disposal, Frodsham said.

&ldquo;Unauthorized and improper disposition of trash is unacceptable to us, as it is to the Koreans,&rdquo; he said.