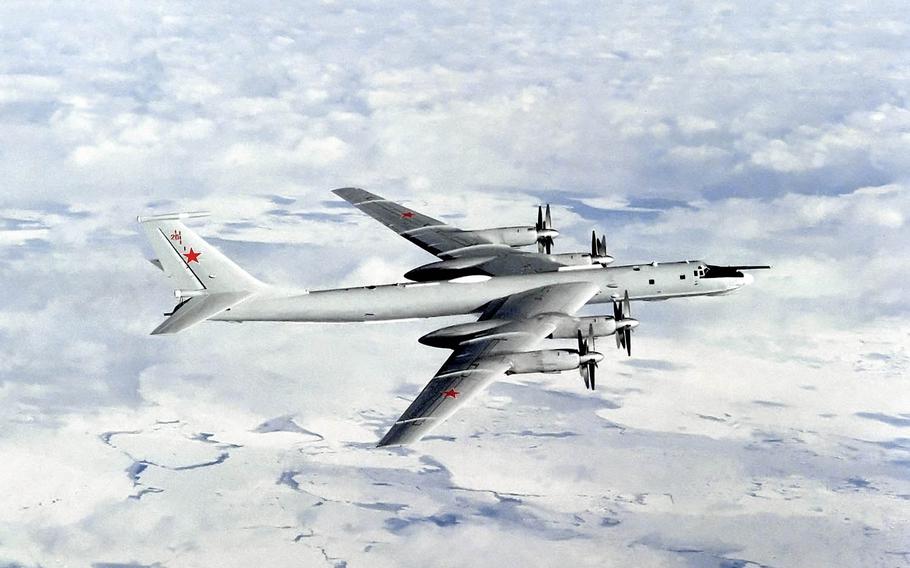 A Russian Tupolev Tu-142 Bear aircraft, like the one picture here, flew as low as 500 feet Tuesday morning, Oct. 27, 2015, near the USS Ronald Reagan, which has been conducting scheduled maneuvers with South Korean navy ships in international waters east of the Korean Peninsula. (Courtesy of the Department of Defense)

A Russian Tupolev Tu-142 Bear aircraft, like the one picture here, flew as low as 500 feet Tuesday morning, Oct. 27, 2015, near the USS Ronald Reagan, which has been conducting scheduled maneuvers with South Korean navy ships in international waters east of the Korean Peninsula. (Courtesy of the Department of Defense) 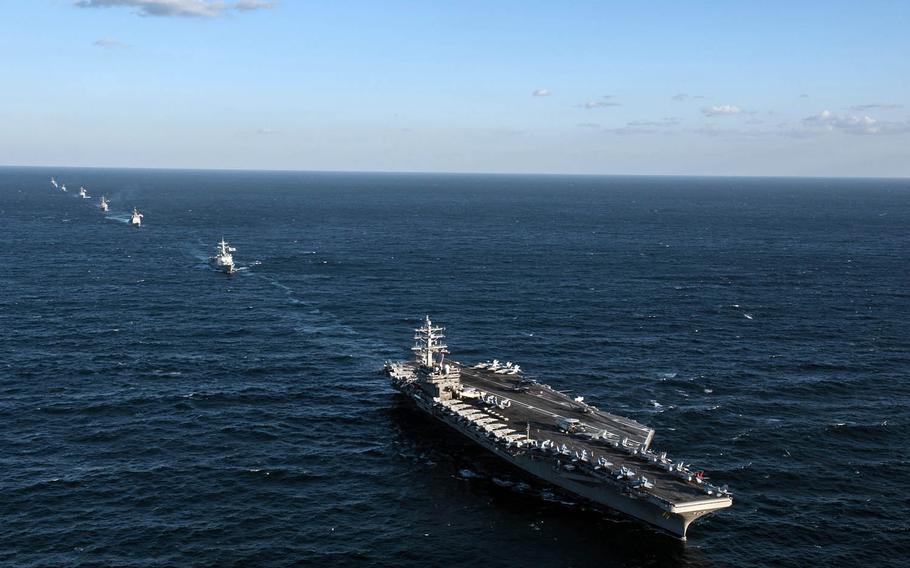 The Ronald Reagan Carrier Strike Group and South Korean navy ships steam in formation during an exercise Tuesday, Oct. 27, 2015, in international waters to the east of the Korean Peninsula. Two Russian aircraft flew within one nautical mile at a height of 500 feet, prompting the carrier to launch four fighter jets in response. The Russian aircraft left without further incident. (Nathan Burke/U.S. Navy)

YOKOSUKA NAVAL BASE, Japan — The USS Ronald Reagan scrambled its fighter jets earlier this week after two Russian naval reconnaissance aircraft flew within one nautical mile of the U.S. aircraft carrier as it sailed in international waters east of the Korean Peninsula, according to 7th Fleet officials.

In the latest in a series of incidents involving Russian aircraft, two Tupolev Tu-142 Bear aircraft flew as low as 500 feet Tuesday morning near the Reagan, which has been conducting scheduled maneuvers with South Korean navy ships. Four F/A-18 Super Hornets took off from the Reagan’s flight deck in response to the Russian advance, 7th Fleet spokeswoman Lt. Lauren Cole said Thursday.

Ronald Reagan monitored the Russian planes while communicating with South Korean and Japanese forces and launched its fighters well before the Russians made their closest approach, Cole said.

Press officials at the Russian Embassy in Seoul were not immediately available for comment Thursday.

On multiple occasions in the past year, Russian aircraft have tested international boundaries by either violating other countries’ airspace or engaging in what Pentagon officials have called “provocative” actions toward U.S. and NATO ships.

In April 2014, a Russian SU-24 fighter jet made 12 “close-range, low-altitude” passes near the USS Donald Cook while the ship was in international waters in the western Black Sea near Romania, the Pentagon has said. Last month, NATO officials said Russian fighters violated Turkish airspace several times.

In September, Japan alleged that Russia violated airspace over the northern Japanese island of Hokkaido.

U.S. Navy officials say they have no objection to Russia, or any other nation, flying or sailing wherever international law allows.

“We are advocates of any country being able to operate within international norms,” Cole said. “We do caveat that with the fact that all of these operations need to be conducted in accordance with the rights and regulations of other countries, and within a safe manner.”

The Reagan is essentially a floating airport, complete with an air traffic control center that tracks and communicates with nearby aircraft. When the carrier engages in flight operations, it institutes a carrier control zone, which extends up to 2,500 feet and within a five-mile radius, according to the Navy’s flight training instruction carrier procedures.

Navy officials did not discuss Thursday whether the carrier was engaged in flight operations when the Russian aircraft approached.

“Even if we don’t have flight operations ongoing, we are still very cognizant of what is going on in the airspace, within a good distance,” Cole said.

The lack of communication by the Russian aircraft also conflicted with general aviation practice. Even commercial airports of any significant size generally expect two-way radio contact when aircraft fly as close as the Russians did, according to international aviation guidelines.

This week’s incident added to a busy day for the Navy in the Asia-Pacific region. It happened at roughly the same time that the destroyer USS Lassen sailed within a 12-nautical-mile territorial zone claimed by China around Subi Reef in the South China Sea.

The U.S. undertook the “freedom of navigation” operation because it considers those waters international, though China condemned the move as a violation of its “indisputable sovereignty.”

Though artificially topped with landfill, Subi Reef is thought to be entirely submerged in its natural state, and therefore does not generate territorial waters under international law.