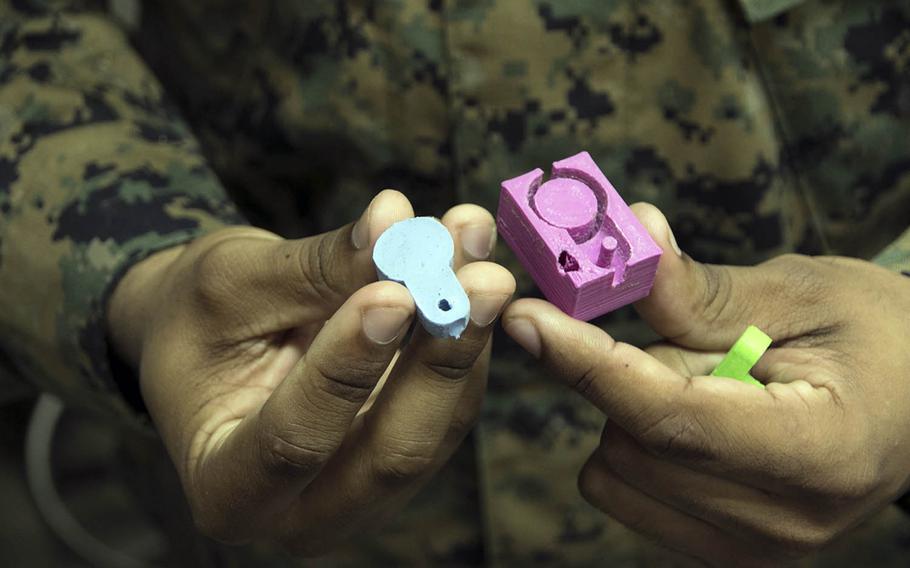 Marine Sgt. Adrian Willis of the 7th Communications Battalion on Sunday, Feb. 5, 2019, holds a radio dust boot cover, left, and a mold for the piece that was made using the unit's 3D printer. (Matt Burke/Stars and Stripes)

CAMP FOSTER, Okinawa — The III Marine Expeditionary Force has anew heroes in the battle against government bureaucracy and wasteful spending — two Marines armed with a LulzBot TAZ 6 3D printer, which retails for less than $3,000.

3D printing in the military is nothing new; the Walter Reed National Military Medical Center has been using 3D printing since the mid-1990s.

However, in the hands of Marine Sgt. Adrian Willis and Lance Cpl. Tracey Taylor, both with 7th Communications Battalion, the LulzBot TAZ 6 has saved the Marine Corps in Okinawa thousands of dollars and streamlined logistics and supply lines.

“I am so big on this because I legitimately see it as the future — not necessarily a future I will see, but the future of this is going to be amazing,” said the 7th Communications Battalion’s communications maintenance chief, Master Sgt. Michael Johnson.

“I believe that the future is being able to take a system like this and metal filaments, plastic filaments, rubber filaments; [Marines] walk in the door and say, ‘Hey, this part broke,’” he said. “I look at them and say ‘OK, come back in 2 ½ hours,’ and in 2 1/2 hours, they have that part.”

Willis and Taylor have been doing just that from a small, barren room in their communications shop on Camp Hansen. As word has spread to different units around the island, they are getting more and more requests to put their skills to use.

Willis – who hails from Las Vegas – learned to use computer-aided design software in high school, he said Feb. 5 as the 3D printer whirred and jolted behind him. He was exposed to 3D printing for the first time at 1st Maintenance Battalion in Camp Pendleton, Calif.

Intrigued by the possibilities, he began 3D printing at home. When he arrived at the 31st Marine Expeditionary Unit as a computer and telephone technician in November 2017, Willis was selected by his command to work with 3D printers.

He immediately began to make a name for himself. He made a replacement bumper for an F-35B Lightning II’s landing gear door that had been worn out.

The 15-cent plastic piece saved the Marine Corps from having to order an entire new door at $60,000 apiece. It also saved the time it takes for a replacement to arrive.

The part was used during the deployment in spring 2018 by Marine Fighter Attack Squadron 121 and is still being produced by the 31st MEU today.

Willis said he arrived at the 7th Communications Battalion in November as a computer technician. Johnson already had a rudimentary 3D-printing setup in the shop.

Willis immediately made suggestions like using different drafting programs, different printing materials and even printing at different temperatures. He had a greater institutional knowledge as far as what was possible, which improved their capabilities immediately.

“We’ve been moving by leaps and bounds,” Johnson said.

The process begins with someone coming to the unit with an idea. If approved, Willis tries to find an open-source — or free and modifiable — plan online. He then alters the existing design to meet the needs of the customer.

Once the design is uploaded to the printer, it sets to work making the desired piece, using a spool of purple polylactic acid material, which is cheap and easy to get, American-made, organic and sustainable, Willis said.

The material is made from corn starch. Simple post-process modifications can bring it up to traditional plastic standards.

Willis has made a spacer for the Hawkeye III Lite, a critical component of the Expeditionary Command and Control Suite Satellite Communication system, Marine officials said. The piece cannot be purchased individually from the manufacturer, so an entire new section of the equipment was being purchased.

He has made dust boot covers for radios, parts for a fuel filter that has allowed for the recycling of fuel barrels and electrical covers for generators.

“This is a simple electrical cover, but it keeps water out of the generator,” Johnson said as the printer quickly produced one of the pieces.

“If it’s not on there, the generator can’t be used in the rain. The company doesn’t make this. The company makes a $2,000 panel that happens to have this piece of plastic on it.”

Willis has also started printing molds to make parts, which saves even more time. He estimates that he has personally saved the Marines over $200,000.

While printers that do a varying degree of things, using varied materials, are spread about the Marine Corps and the island, Willis has been working to get them all to talk to each other.

He has also been working with the III MEF’s G-4, or supply and logistics, to standardize processes and procedures through the Marine Corps’ SharePoint Site and he has been training other Marines in his office.

The more word has spread, the more units have come to them for help making things. It doesn’t always work out, as certain pieces and parts are contractually obligated or proprietary. They also turn people down if they request parts that could involve any kind of safety issue, Johnson said.

Where it can and will go from here is anyone’s guess. Willis dreams big and is pushing the Marines to do the same.

“The importance of 3D printing, I don’t think, has been fully realized yet,” Johnson said.

“This is going to be what the future of the Marine Corps is,” Willis added.