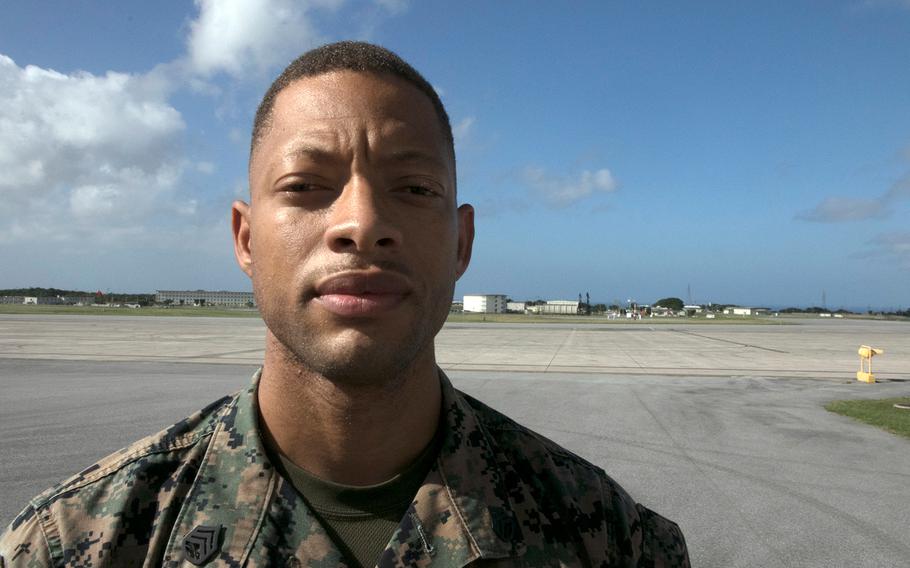 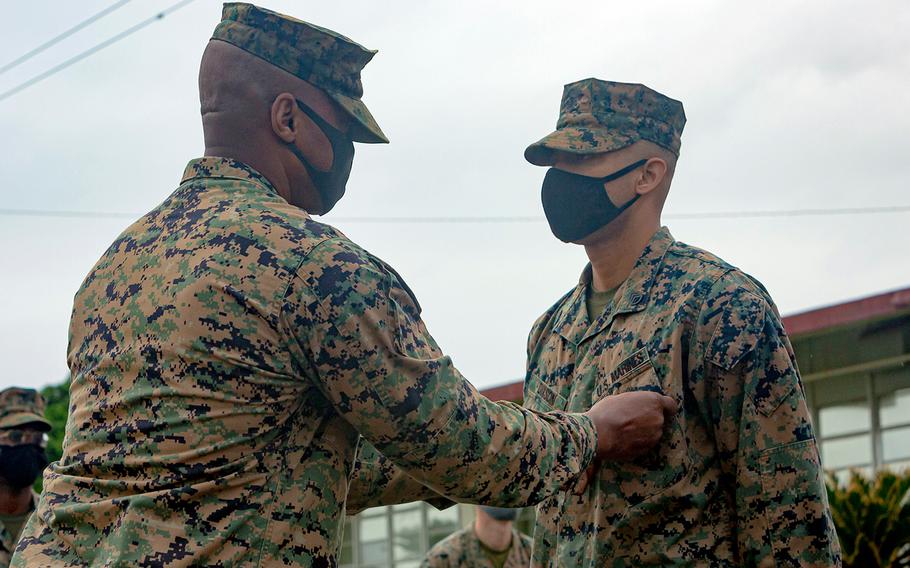 On Oct. 4, Dixson’s ease in hazardous water and his dedication to physical fitness, he said, enabled him to rescue a local woman from a rip current at an infamous Okinawa diving spot, Mermaid Grotto in Onna.

The water rushing quickly out to sea had sucked the woman under, where she swallowed seawater and continued sinking, Dixson told Stars and Stripes on Thursday on the flight line at Marine Corps Air Station Futenma.

“Adrenaline kicked in; I had no time to waste,” said the aircraft recovery crew leader for 1st Marine Aircraft Wing. “When I went under, I saw her about [10 feet] down. She was pretty much unresponsive.”

Dixson brought the woman to the surface, performed “three good pumps” to her chest and she coughed up the water. He then carried her to the shallows and escorted her back to shore.

The woman, referred to as Ms. Miyagi in a recent Marine Corps statement, thanked the 28-year-old married father of two.

“Good swimmers go out there and never come back,” Dolberry said, according to the statement. Dixson “went out there and performed above expectations by saving a life … I’m very proud.”

Mermaid Grotto, also known as Apogama, can appear tranquil, with tide pools and beckoning caves. However, it’s one of Okinawa’s most notorious spots for drownings and rescues.

Two groups of U.S. service members were rescued by Japan Coast Guard helicopters there last year after being sucked out to sea by rip currents. In October 2016, the Marine Corps placed a brief moratorium on all water activities on the island after two service members drowned in the area.

The day of the rescue, Dixson was spearing alone, “pretty far out” when conditions changed and things started getting rough, he said. He decided to call it a day.

On his way back in, he heard a woman screaming for help, he said. He swam to her as fast as he could. The woman communicated to Dixson that her friend needed help and pointed to an empty spot on the water.

Dixson said he swam through the rip current and dove down.

In that moment, he said, he was afraid he wouldn’t find the woman or that she might already be dead. Reaching her, seeing her arms move and watching her cough up water at the surface relieved his fears, he said.

“That was a relief; I didn’t fail her,” he said. “I don’t have that guilt, that I could have done more.”

Dixson did the backstroke the entire way back to shore, pulling the woman with him, he said.

Dixson told no one about the harrowing rescue that day, the Marine Corps statement said. His command learned of the deed when the woman dropped off a letter at the MCAS Futenma gate thanking Dixson once again for saving her life.

Dolberry was impressed with Dixson’s humility, the statement said. Dixson was surprised when he received the award.

“To be recognized for it is humbling, but at the same time, it’s our job to be able to do stuff like that,” he said. “I don’t see anything too extraordinary out of it. I was just glad I was physically capable at that time to assist her.”