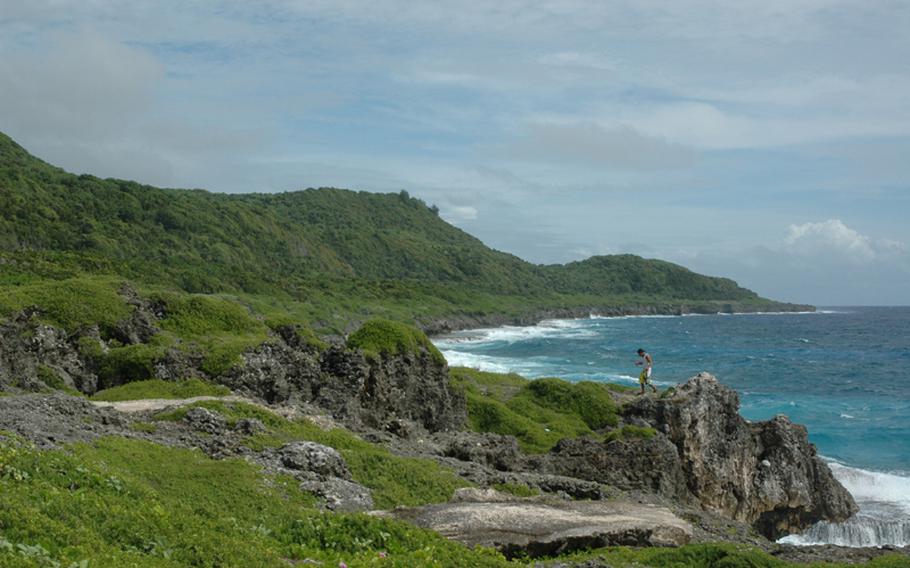 A man walks along Guam's eastern shore in an area near Pagat, the site of an ancient Chamorro village, in the summer of 2010. The military has proposed putting a firing range adjacent to the village on land stretching further north up the coast. That proposal, despite offers to keep the Pagat area accessible to the public, has not appeased some. Earlier that year, the National Trust for Historic Preservation put the area on its most endangered list. (Teri Weaver/Stars and Stripes)

A man walks along Guam's eastern shore in an area near Pagat, the site of an ancient Chamorro village, in the summer of 2010. The military has proposed putting a firing range adjacent to the village on land stretching further north up the coast. That proposal, despite offers to keep the Pagat area accessible to the public, has not appeased some. Earlier that year, the National Trust for Historic Preservation put the area on its most endangered list. (Teri Weaver/Stars and Stripes) David Bice, a former Marine general charged with overseeing the military&#39;s buildup on Guam, talks to a reporter in Guam in January during a public hearing on the expansion plans. This week Bice said he has been working to slow down the construction pace of the project, a complicated effort because the plans involve moving 8,600 Marines from Okinawa to Guam by 2010. He&#39;s proposed the creation of an advisory committee made up of federal and local leaders to monitor the progress of the buildup as it unfolds in coming years. (Teri Weaver/Stars and Stripes) A group of Guam residents climb down to the freshwater caves in the Pagat area, where the island&#39;s native Chamorro residents found fresh water thousands of years ago. The military has proposed putting a firing range adjacent to the land, a move that has some residents and local leaders concerned about access to the caves. (Teri Weaver/Stars and Stripes)

TOKYO &mdash; The U.S. military&rsquo;s plans to build Guam into a Pacific hub by 2014 are proving too much too fast, according to the retired Marine general in charge of the project.

&ldquo;Bringing in such a large number of workers in such a short amount of time was problematic,&rdquo; Bice said last week. &ldquo;We have to find a way to adjust to the realities of Guam.&rdquo;

But revising the initial plan &mdash; which centers on a move of 8,600 U.S. Marines from Okinawa to Guam &mdash; is as challenging as moving the entire project forward. The deadline for the Marines&rsquo; move is 2014, a date set by the United States and Japan to alleviate long-standing complaints about the number of U.S. troops living on Okinawa.

Unless that agreement changes, Bice and other military officials must push ahead, adjusting construction priorities in such a way that the project remains on schedule without overtaxing the island&rsquo;s infrastructure.

At the same time, the military must answer critics of the buildup, inside and outside of Guam.

To answer these challenges, the military is revising its priorities, empowering local officials with a stronger voice in the project, and imposing some slow-down valves to build flexibility into the $10.3 billion move.

The results, Bice said, mean that a maximum of 44,000 people will be on Guam at the height of construction, down from estimates that would add 79,000 to the island&rsquo;s 178,000 population. &ldquo;There&rsquo;s only so much we can put through the pipeline at one time,&rdquo; Bice said during a telephone interview from Washington.

Fixing the island&rsquo;s infrastructure woes and gaining public leaders&rsquo;s support remain important, Bice says. To start, the military has moved investment in Guam&rsquo;s utilities to the top of its to-do list.

Of the $6.1 billion that Japan is putting toward the Marines&rsquo; move, $740 million is earmarked for utilities improvements, Bice said. The plan now calls for putting $600 million of that toward improving sewage and power systems outside the bases.

Japan balked at that suggestion years ago, according to Simon Sanchez, who chairs the island&rsquo;s Consolidated Commission of Utilities. But the Marines will plug into Guam-run power and flush into Guam-controlled sewage systems, so getting Japan&rsquo;s money into that integrated system will benefit the Marines as well.

&ldquo;I think that idea is finally taken hold,&rdquo; he said.

For the long term, the military is giving local officials more control over the construction pace. A new advisory group, the Civilian Military Coordination Council, would have federal and local officials monitor and, if necessary, call for intermittent slowdowns of the buildup, Bice said.

The exact makeup and responsibilities of the council are still being worked out, and the group would have no binding authority. The idea is to convene a mix of utility, government and military representatives -- co-chaired by the two-star Navy admiral stationed on Guam and the island&rsquo;s governor -- to project how the military&rsquo;s construction plans play out in reality.

&ldquo;We see it as a means to address local concerns,&rdquo; Bice said, &ldquo;and the opportunity to look programmatically forward by one or two years.&rdquo;It&rsquo;s an idea that Guam Gov. Felix Camacho embraces, according to spokesman Shawn Gumataotao.

&ldquo;This is something the governor has asked for,&rdquo; he said Friday.

It&rsquo;s unclear, however, whether this push for collaboration will appease local leaders, some of whom say the military continues to leave Guam in the dark. The senator who chairs the Committee on the Guam Military Buildup and Homeland Security learned of the new council from a reporter late last week.

&ldquo;I and others have been advocating that this begin now, not later,&rdquo; Judith Guthertz said Friday of the council. &ldquo;This should have happened two years ago.&rdquo;

Four years ago, the United States and Japan agreed to move III Marine Expeditionary Force from Okinawa to Guam. The Pentagon then upped the ante, adding an Army air defense unit and long-term visits from aircraft carriers to the island&rsquo;s Air Force and Navy mix.

Currently, the plans call for adding about 9,000 troops to the 6,800 stationed on the island, where the military controls about one-third of the land. Last week, Bice said the island&rsquo;s permanent population would likely increase by 35,000.

Late last fall, the military released its draft impact statement, a requirement under federal law. A chorus of criticism followed, from local residents to the island&rsquo;s governor to the EPA.

Still, the EPA acknowledged the challenges involving the island&rsquo;s infrastructure; none of Guam&rsquo;s sewage treatment plants operates in full compliance.

&ldquo;Progress is being made,&rdquo; Nova Blazej, a special assistant for the EPA who&rsquo;s been working with the military on its Guam environmental impact statement for more than three years, said in late May. &ldquo;I really do think people will be working on it until the night before it&rsquo;s due.&rdquo;

That collaboration is paying off, Bice said. He and other top federal officials will visit Guam July 22-23 to roll out final plans. Nancy Sutley, chairwoman of the White House Council on Environmental Quality and the president&rsquo;s principal environmental advisor, is a part of the group.

Not everyone feels such camaraderie.

On Friday, Guam&rsquo;s senators voted 14-0, with one abstention, to specifically prohibit the lease, purchase or use of parcels around a proposed firing range for any &ldquo;warfare training and/or for any similar purpose.&rdquo; The legislation, if signed by the governor, would apply to subsequent landowners as well.

The legislature must approve any deal that lets the military lease or buy the land under the proposed firing range, Guthertz said. She hopes that local law, combined with last Friday&rsquo;s legislation, could force the military to find room for the firing range within its own fences.

&ldquo;They already own one-third of the island,&rdquo; the senator said. &ldquo;How much more do they need?&rdquo;

The legislative moves could force the military to consider seizing the land, on an island that harbors emotional scars about land condemnation. It&rsquo;s a political nightmare the military has said repeatedly it wants to avoid.

On that point, local leaders agree.

Concerns about the firing range involve more than land usage. The proposed site backs up against remains of a native Chamorro village dating to the 8th century. This spring, the National Trust for Historic Preservation put the area, called Pagat, onto its most endangered list.

The move by the private, nonprofit organization can&rsquo;t halt the military&rsquo;s plans, but it did draw attention from leaders, including Bice. To soothe worries and make the area more accessible, Bice said, the military has proposed cutting roads into the undeveloped area and installing public bathrooms near Pagat.

That&rsquo;s not good enough for Quinata, who worries the military&rsquo;s need to practice shooting will limit overall accessibility. Another historic village on the island, Sumay, now sits inside Naval Base Guam.

&ldquo;Their definition of access is for people to come visit once a year,&rdquo; Quinata said. &ldquo;We can&rsquo;t buy that.&rdquo;