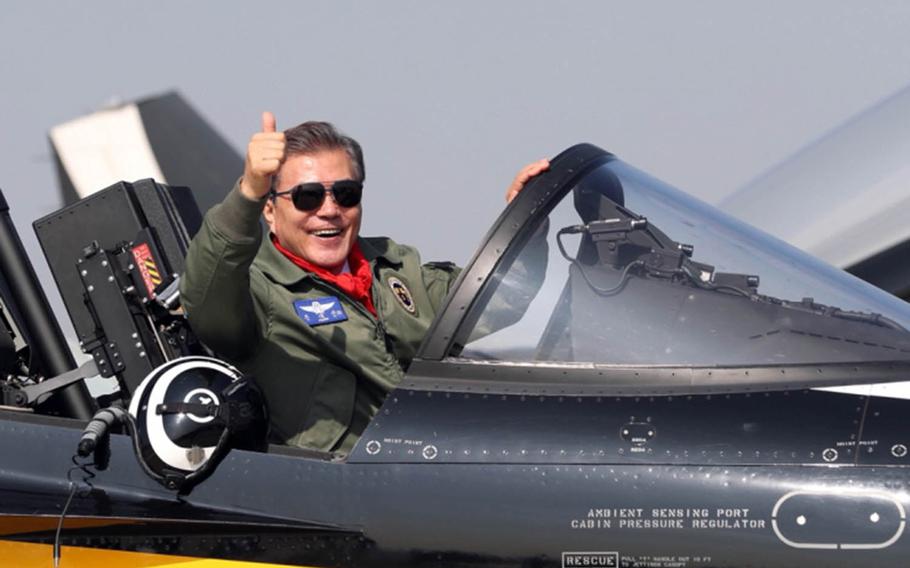 The retired three-star general is still involved in South Korea’s defense, but now as an executive helping the Hanwha conglomerate expand its weapons exports to the United States.

Hanwha’s appointment of Champoux is part of a broader government-backed industry strategy to make South Korea a major player in the international defense market.

“I know the environment that their products are going to be deployed in,” the 63-year-old said during a recent interview at his office in downtown Seoul, with a colorful map of the United States on the wall behind his desk.

He also brings a hefty Rolodex after nearly 39 years in the military, most recently as 8th Army commander from June 2013 until shortly before he retired in April 2016.

Faced with a constant threat from North Korea and aided by its alliance with the U.S., the South has long been a top importer of defense equipment and technology.

But it also has increased its domestic output, including the K-9 self-propelled howitzer and the Hybrid Biho anti-air weapons platform, both made by Hanwha subsidiaries and on display this month at an annual defense show organized by the Association of the United States Army, or AUSA, in Washington.

South Korea has risen from 17th on a list of the world’s top weapons exporting nations in 2006 to ninth last year, according to the Stockholm International Peace Research Institute.

South Korean companies, including Hanwha and its subsidiaries, also occupied seven spots on the list of top 100 arms-producing companies put out by SIPRI in 2015, according to the most recent figures available.

President Moon Jae-in called for efforts to increase exports as an economic growth engine in a speech opening the Seoul International Aerospace and Defense Exhibition on Oct. 17.

“We urgently need to enhance the competitiveness of our own defense industries. We need to make a new leap, transcending from the localization of advanced weapons to exporting them,” he said.

Moon also posed in a T-50 Golden Eagle, a supersonic advanced trainer jet developed by the state-run Korea Aerospace Industries in partnership with the Bethesda, Md.,-based Lockheed Martin. One of South Korea’s most popular exports, it has been sold to Indonesia, Iraq, Thailand and the Philippines.

Yonhap News Agency has reported that KAI is bidding for an Air Force program to replace its aging fleet of trainer jets by providing an upgraded version of the Golden Eagle in a deal believed to be worth $16 billion.

The decision is expected to be made later this year and would be one of the biggest defense contracts in a decade, according to Yonhap.

South Korean government data also show arms-export contracts rising from about $845 million in 2007 to a peak of $3.6 billion in 2014 although the figure fell to $2.5 billion in 2016, apparently due to increased competition.

The Defense Acquisition Program Administration doesn’t break out figures for specific countries, but it recorded an increase in overall exports to North America from $845 million in 2007 to 1 billion last year.

Enter Hanwha Corp., which began producing explosives during the 1950-53 Korean War and has grown to become one of South Korea’s biggest family-run conglomerates, known as chaebols. The Seoul-based company has emerged as a national defense industry leader after acquiring rivals Samsung Techwin, Samsung Thales and Doosan DST.

“South Korea has been steadily growing its global market export share over the past decade primarily because investments were made in growing export market areas,” said Ben Moores, a defense analyst with London-based IHS Markit. “I think that based on the backlog secured South Korea has a good chance of overtaking China before the end of the decade,” he said in an email.

However, Moores said South Korean companies face hurdles, including quality and corruption concerns, in trying to increase exports to the United States.

“The U.S. is a very different market compared to the rest of the world,” he said, noting deals with the U.S. require a local partner, local assembly and a strong local supply chain.

“We have yet to see if South Korea can deliver when it comes to real industrial participation in the USA at a system level,” he said. “If South Korea sticks to sub-systems then its chances of delivering are much higher.”

Moores said hiring Champoux was a smart move because he has the expertise and military credentials to help Hanwha navigate the U.S. system.

Champoux said Hanwha made him an offer he couldn’t refuse, with a “generous compensation package” including a furnished apartment in Seoul, and plans to open a U.S. office in northern Virginia next year so he can spend more time at home with his family.

Champoux - who started his new job on May 11 - said his team of eight has been focused on setting up the U.S. business unit, developing a strategy and networking, with appearances at the AUSA and ADEX conferences.

“We have an existential threat to the North,” he said, adding the South has “developed indigenous capabilities to address that threat.”

“And so the idea is to enlighten the U.S. market as to our capabilities and to look for partnerships,” he said.

Due to the combined nature of U.S.-South Korean military operations, Champoux said ethics regulations forbade him from contacting former colleagues for a year after his retirement.

Hanwha can’t sell its products directly but must partner with a U.S. entity, especially if it involves classified projects, Champoux said.

“We’re talking to about five U.S. players on different projects. Looking for some supply chain activity,” he said, without offering specifics. “I wouldn’t be surprised if we didn’t enter the market through a future acquisition.”