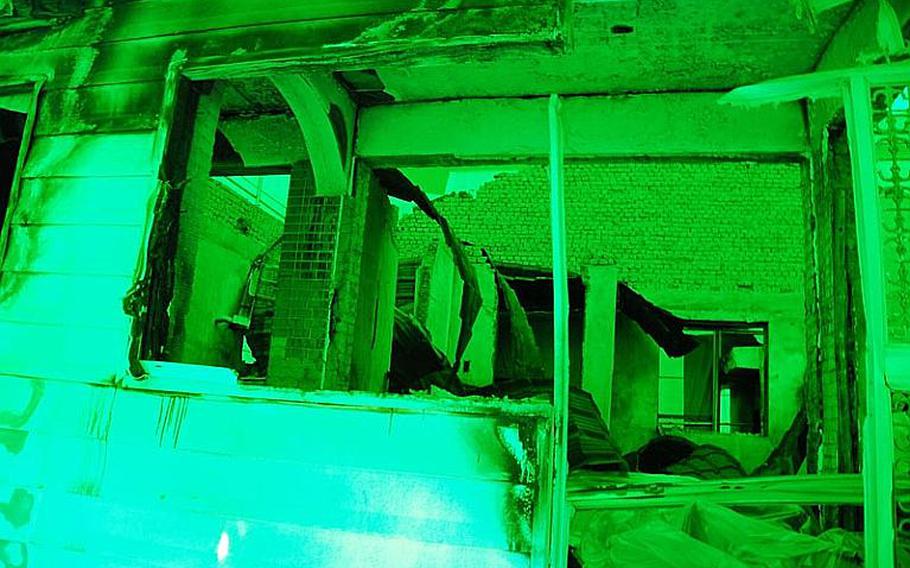 Buy Photo
The remains of a bombed house in the middle of the main village on Yeonpyeong Island are hidden under a massive green tarp, giving the remains an eerie glow. Passersby can view the buildings by looking through a doorway cut into the tarp, a display locals call security education. (Ashley Rowland/Stars and Stripes)

Buy Photo
The remains of a bombed house in the middle of the main village on Yeonpyeong Island are hidden under a massive green tarp, giving the remains an eerie glow. Passersby can view the buildings by looking through a doorway cut into the tarp, a display locals call security education. (Ashley Rowland/Stars and Stripes) 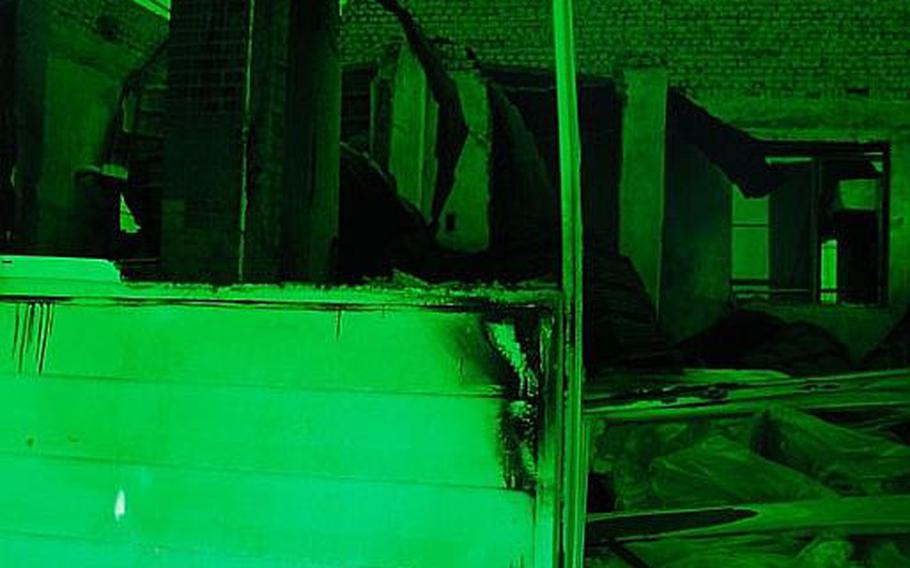 Buy Photo
The remains of a bombed house in the middle of the main village on Yeonpyeong Island. What remains are hidden under a massive green tarp, giving the setting an eerie glow. Passersby can view the buildings by looking through a doorway cut into the tarp. (Ashley Rowland/Stars and Stripes) 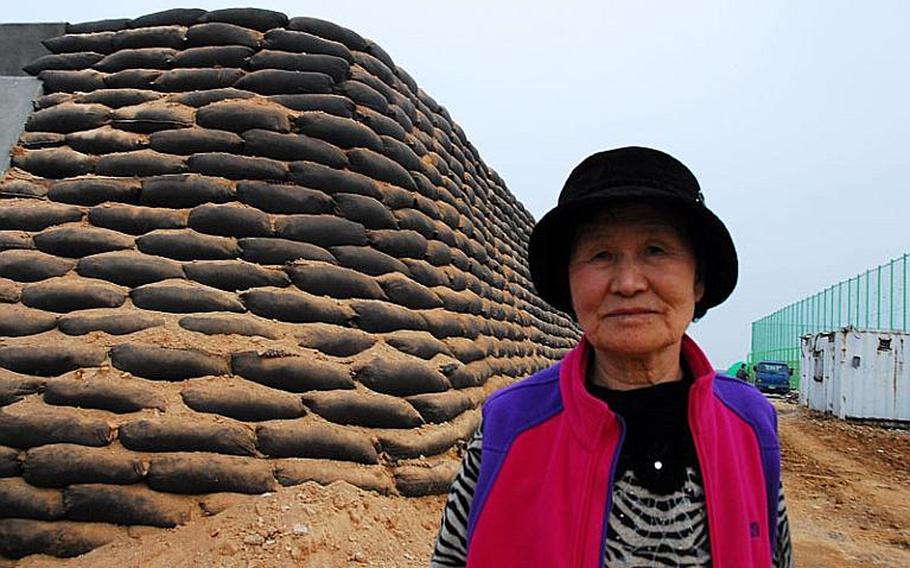 Buy Photo
Kim Sun-young, 72, stands outside a bomb shelter now under construction across the street from her home on Yeonpyeong Island, which was shelled by North Korea in November 2010. Kim said she does not believe the shelter will keep people safe because it is built above ground. (Ashley Rowland/Stars and Stripes) 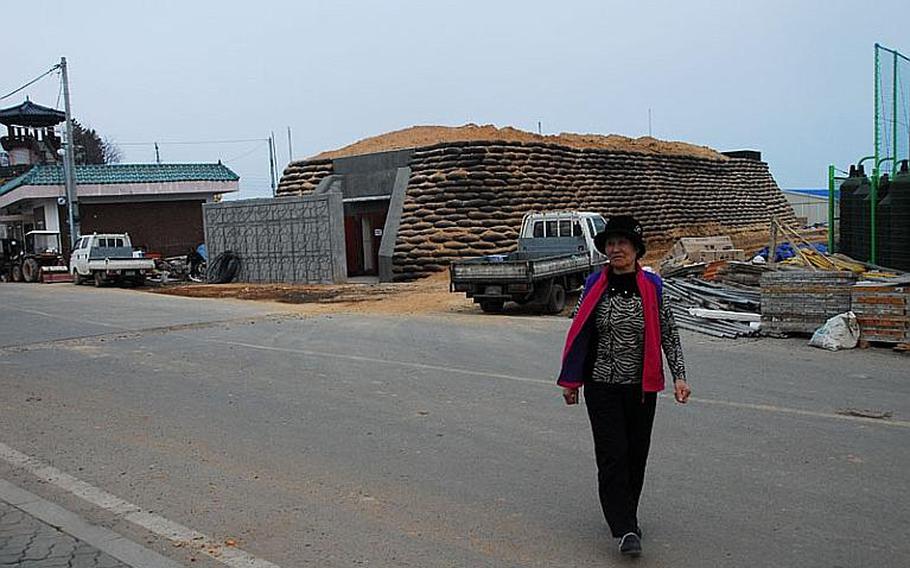 Buy Photo
Kim Sun-young, 72, walks in front of a bomb shelter now under construction across the street from her home on Yeonpyeong Island, which was shelled by North Korea in November 2010. (Ashley Rowland/Stars and Stripes) 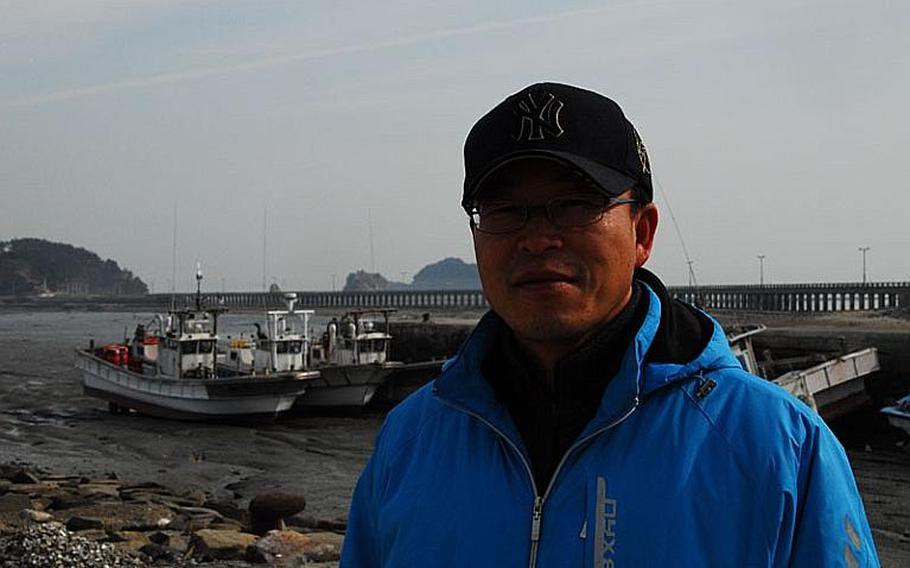 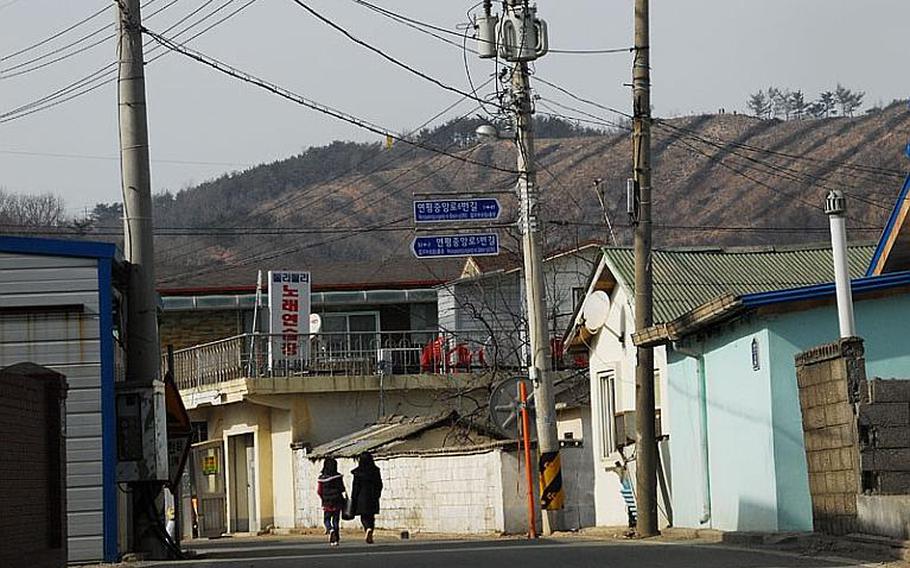 Buy Photo
Two girls walk down a street in the main village of Yeonpyeong Island. Behind them, a scarred mountainside hit by North Korean artillery fire in November 2010 is marked by rows of debris. (Ashley Rowland/Stars and Stripes) 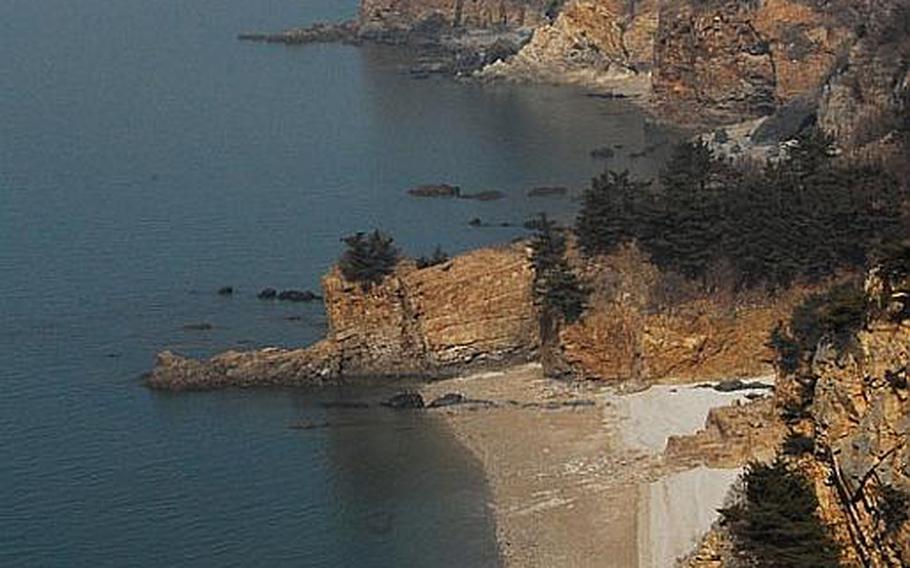 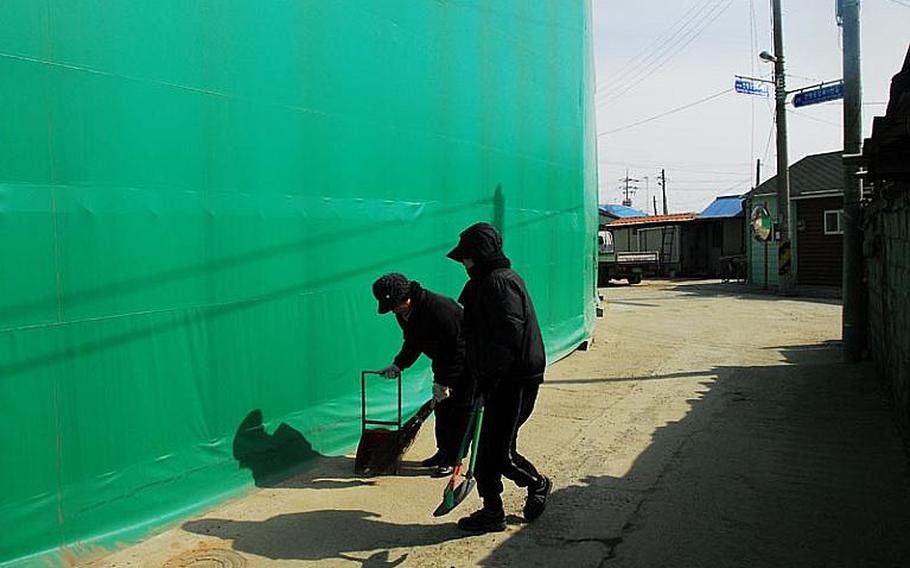 Buy Photo
Two women sweep the road outside a green tarp that houses the shells of several buildings destroyed by a North Korean attack in 2010. The women are part of a community improvement group paid by the government to clean the village streets. (Ashley Rowland/Stars and Stripes) 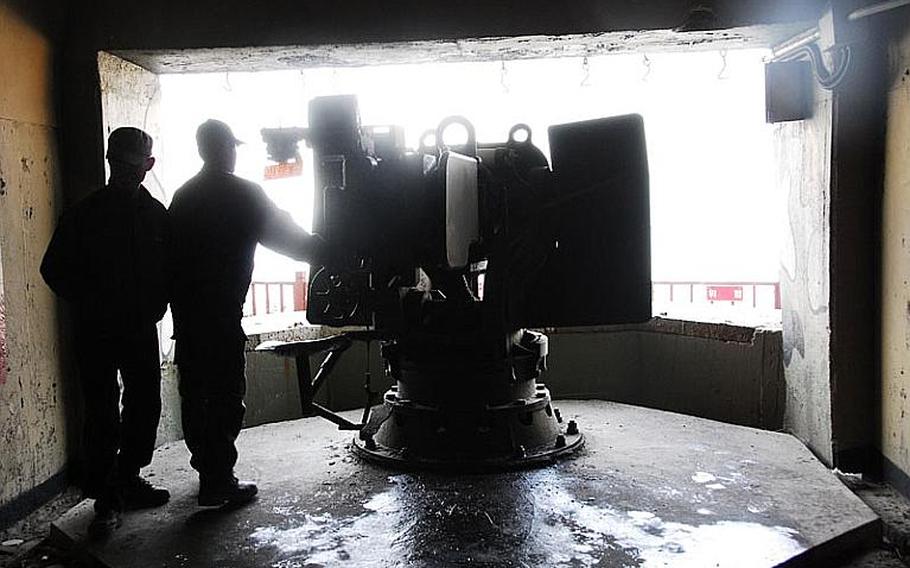 Buy Photo
Two visitors at an underground tunnel on Yeonpyeong Island look at an old piece of artillery, aimed at North Korea, on display for tourists. (Ashley Rowland/Stars and Stripes)

YEONPYEONG ISLAND, South Korea &mdash; Amid a cluster of modest homes in the middle of town, a reminder of the not-so-distant past of this rural island is tucked away under a tarp two stories high.

Beneath this giant green shroud is a monument of sorts, a sobering, ghoulish display of half-standing brick walls and melted vinyl that local residents call &ldquo;security education.&rdquo; It&rsquo;s the charred remains of a handful of houses blown apart when North Korean shells hit the island during a surprise attack more than a year ago.

The ruins are both a reminder of what happened on Nov. 23, 2010, and what could happen again &ndash; a near constant worry for many residents, thanks to the increased uncertainty on the peninsula following Kim Jong Il&rsquo;s death in December, and the rise to power of his son, Kim Jong Un.

This week, those worries intensified, with North Korea&rsquo;s threat to launch a &ldquo;sacred war&rdquo; in retaliation for ongoing U.S.-South Korean military exercises.

The annual computerized Key Resolve exercise began Monday and ends March 9, while the larger Foal Eagle field exercise &ndash; in which 11,000 U.S. forces and as many as 200,000 South Korean troops are expected to participate &ndash; began Thursday and will continue through April 30.

And while North Korea routinely makes such threats during war games, many islanders say they are deeply disturbed by the rhetoric now coming from the North because so little is known about Kim Jong Un.

&ldquo;People here cried&rdquo; after television stations broadcast the threats from the North, said Cho Chul-hui, a tourist fishing guide on the tiny island known for its crab and yellow croaker. &ldquo;I didn&rsquo;t sleep a wink the night I heard about it.&rdquo;

His mother, Kim Sun-young, 72, said a half-dozen of her friends, terrified of another attack, have left the island for part or all of the military exercises. She worries that if there is another bombing, the above-ground shelter now under construction across the street from her house won&rsquo;t be sturdy enough to offer enough protection.

But Yeonpyeong is her home and she is too old to leave, Kim said, even though she believes North Korea&rsquo;s angry rhetoric this time.

&ldquo;North Korea is happy when it gets gifts of food, but only at that time. Who knows what Kim Jong Un will do after that,&rdquo; said Park, whose house was destroyed in the 2010 attack.

Despite the heavy South Korean military presence on the island, an undercurrent of anxiety pervades life here.

Park Myong-sun, 67, said she didn&rsquo;t know about the U.S.-South Korean exercises, but said she constantly worries the North Korean &ldquo;bastards&rdquo; will find reason to strike again.

&ldquo;North Korea did it once, so they may do it another time,&rdquo; said Park, who also lost her house in the attack and now lives with six family members in a cramped, temporary house funded by the government. Another woman, the mother of two small children, said she is more worried now than at any point since the November 2010 attack. The woman, who declined to giver her name because her husband is stationed with the South Korean military here, said the North isn&rsquo;t worried about possible retaliation.

After the bombing, which forced hundreds of people to flee on their fishing boats to a neighboring island, residents were evacuated to the mainland for several months, where they lived with shelters or friends or relatives.

Though most, if not all, of the islanders have returned, life here has changed in innumerable small ways.

Some housewives say they now routinely tune into the news instead of soap operas. After spending months worrying about their own survival, many say people are less generous and friendly. The central village is dotted with gleaming new brick houses, replacements for those that were destroyed, and construction on a handful of bomb shelters is under way.

And, for several hours each month, life comes to an abrupt halt during the South Korean military&rsquo;s live-fire exercises, when everyone from fishermen to schoolchildren is required to move to the bomb shelters.

Lee Kyong Sun said she worries about another attack, but refuses to leave the island where she and her husband, a fisherman, own a small minbak, or inn.

Keeping a civilian presence on Yeonpyeong is critical, she said.

&ldquo;We want to protect the island,&rdquo; she said. &ldquo;If not, North Korea will take it.&rdquo;