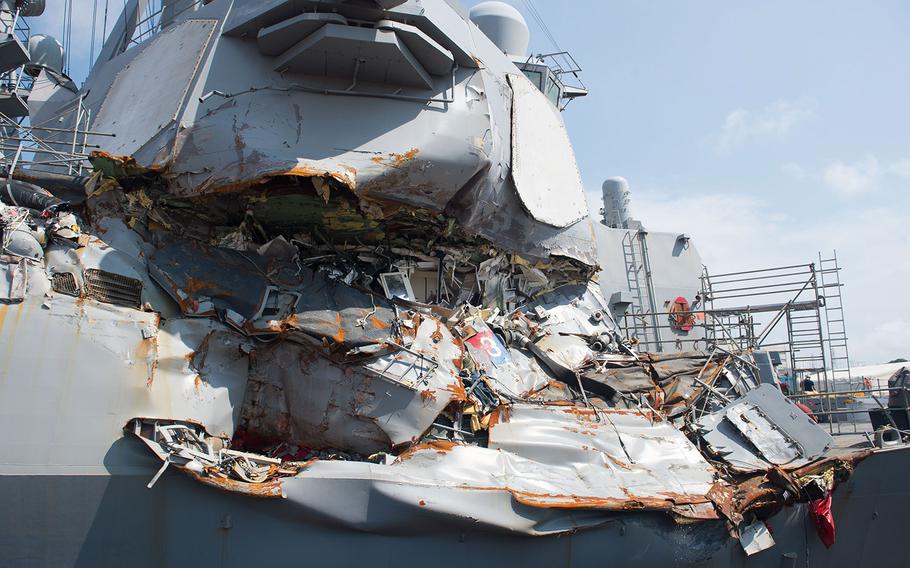 In a July 13, 2017, photo, the USS Fitzgerald sits in Dry Dock 4 at Fleet Activities Yokosuka, Japan, to continue repairs and assess damage sustained from its collision with a merchant vessel. (Christian Senyk/U.S. Navy)

A Navy board of inquiry found no reason to remove from the service a lieutenant charged last year in the fatal collision of the USS Fitzgerald, according to a report Monday by U.S. Naval Institute News.

Lt. Irian Woodley was accused of failing in his duties the day the guided-missile destroyer collided with a Philippine-flagged container ship in the waters south of Japan on June 17, 2017. Seven sailors died as a result of the collision.

After an Article 32 hearing in July, the charges against Woodley — dereliction in the performance of duties through neglect resulting in death, negligent hazarding of a vessel and negligent homicide — were dropped. In an Article 32 hearing, like a preliminary hearing in civilian court, a military court rules whether enough evidence exists to take a criminal case to trial.

Woodley was accused of failing to maintain an accurate picture of the vessels around the ship, oversee watch standers in the combat information center and communicate information and recommendations to those driving the ship.

After the charges against him were dropped, Woodley’s case went to a board of inquiry to determine whether he should be discharged.

The board’s decision Friday is essentially the equivalent of an acquittal in court, Woodley’s lawyer, Lt. Cmdr. Justin McEwen, told USNI. The board ruled unanimously, 3-0, that the government did not prove a basis for separating Woodley from the service.

“Because the government did not prove basis, the board did not need to answer the question whether Lt. Woodley would be retained or separated. He is automatically retained,” McEwen told USNI News.