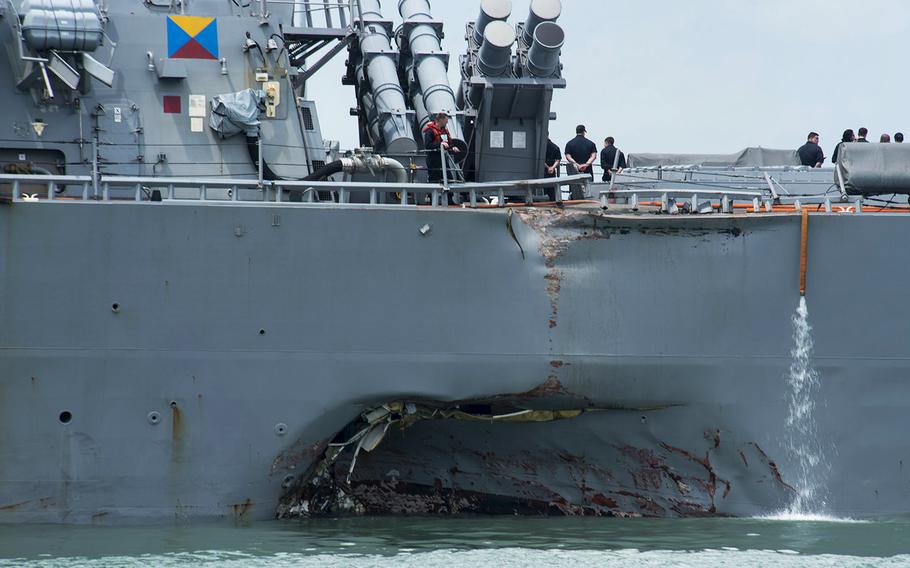 The USS John S. McCain shows damage to the portside of the hull while docked on Monday, Aug. 21, 2017 at Changi Naval Base in Singapore. (Joshua Fulton, Planet Pix/Zuma Press/TNS)

The U.S. Navy will issue new directives requiring ship commanders operating in congested seas to broadcast their ships' locations in an effort to avoid collisions, according to a report that aired on National Public Radio on Friday.

A spate of collisions at sea has top Navy brass reconsidering that protocol.

According to the NPR report, Navy ships will be changing the way they employ the Automatic Identification System, which commercial vessels use as a tool to help avoid crashes.

Retired Vice Adm. William Douglas Crowder, a former commander of the U.S. Seventh Fleet and a former deputy chief of naval operations, told NPR that Navy ships typically use AIS in receive-only mode, which allows them to see other vessels using the system, but doesn't let other ships see them.

"AIS is certainly not the only means to avoid collisions at sea, but it's an important tool," author and former commersial vessel captain John Konrad was quoted as saying. "It's important for situational awareness."

Recent accidents involving Navy ships in the Pacific have killed 17 sailors: An Aug. 21 collision east of Singapore, involving the USS John S. McCain and a merchant ship, killed 10 sailors. On June 17, seven sailors died when the USS Fitzgerald collided with a merchant vessel off the coast of Japan.

NPR reported that it still isn't clear whether the Fitzgerald was transmitting AIS at the time of the June collision, but it is known that the McCain was not, the report said.