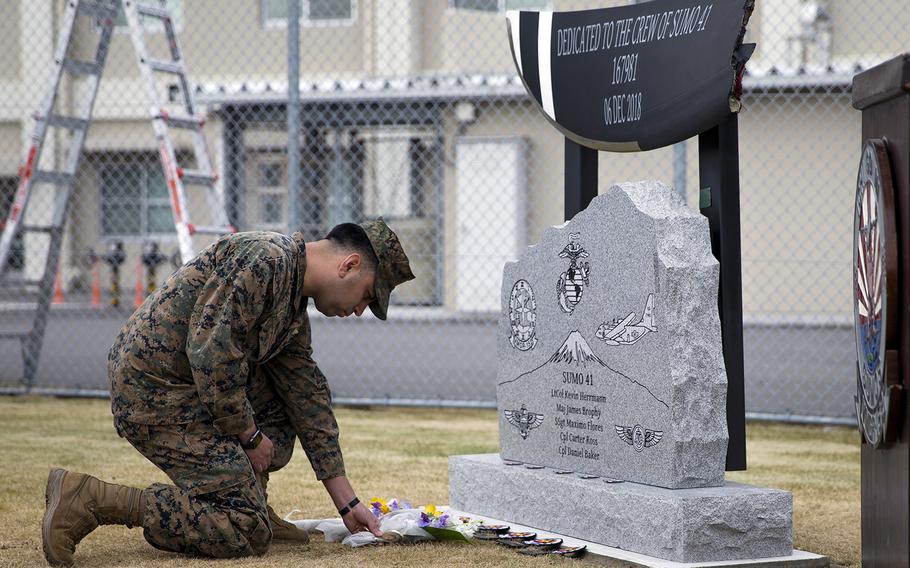 TOKYO — A Marine Corps review has found multiple inaccuracies in the investigation of a midair collision off Japan’s coast that killed six Marines more than two years ago, according to a report by Military.com.

Five crew members of a KC-130J tanker and the pilot of an F/A-18 Hornet died during the nighttime training mission on Dec. 6, 2018. The Hornet’s weapons officer was the sole survivor. Both aircraft were based at Marine Corps Air Station Iwakuni.

The investigation also found that the fighter pilot’s use of the sleep aid Ambien contributed to the crash and that Marine All-Weather Fighter Attack Squadron 242 suffered from “inadequate oversight of training and operations” and an “unprofessional command climate.”

Four Marine officers — the squadron commander and its executive, operations and aviation safety officers — were fired as a result.

However, a review of the investigation’s findings directed by Gen. Gary Thomas, the assistant commandant, has found “many inaccuracies” that led to “differing — and false — narratives,” according to the Wednesday report by Military.com.

Lt. Gen. Robert Hedelund, the service’s longest-serving aviator, assigned to carry out the review, wrote that the first investigation was not impartial in its focus, thorough in its scope or accurate in its findings, according to Military.com.

The review board dismissed the initial report’s finding that trace amounts of Ambien found in Capt. Jahmar Resilard, the F/A-18 pilot who crashed into the tanker, played a role in the accident.

“There is no basis to conclude that … Ambien use was casual or contributory to the 2018 mishap,” the new 153-page investigation states, according to Military.com.

The new findings highlight challenges faced by Resilard on the night of the crash.

His aircraft (call sign Profane 12), the tanker and another F/A-18 (call sign Profane 11) were flying with their lights off during the refueling operation but, after tanking, the other fighter turned on its external lights, according to the review, Military.com reported.

“These circumstances set the conditions for Profane 12 to focus on the overtly lit Profane 11 aircraft instead of the dimly lit tanker,” the report states, according to the website.

The experts on the review board determined that Resilard lost sight of the C-130 “because he became singularly focused on Profane 11.” Resilard’s night vision goggles washed out while flying off near the lighted second F/A-18, making it harder to see the tanker, Military.com reported.

“It must be noted, this specific set of circumstances would have been incredibly difficult for any pilot, let alone a junior, or less proficient pilot to overcome,” the review board wrote, according to the website.

Maj. Gen. Thomas Weidley, former head of the 1st Marine Aircraft Wing, has since faced administrative action. So has Col. Mark Palmer, former commanding officer of Marine Aircraft Group 12. An aviation safety officer who was incorrectly blamed after the first investigation has been cleared, the website reported.

The 1st Marine Aircraft Wing’s operational tempo “overshadowed or caused a blind zone” when it came to the all-weather attack squadron’s readiness, the review board wrote, Military.com reported.

“Accepting low readiness from [the squadron] had become common practice for many years, and in this case, 1st MAW made no effort to mitigate [the squadron’s] risk in participating in” the nighttime refueling exercise.

Marine Aircraft Group 12 also failed to recognize the risks, the new investigation states, according to the website, “to a greater degree and with greater ramifications.”