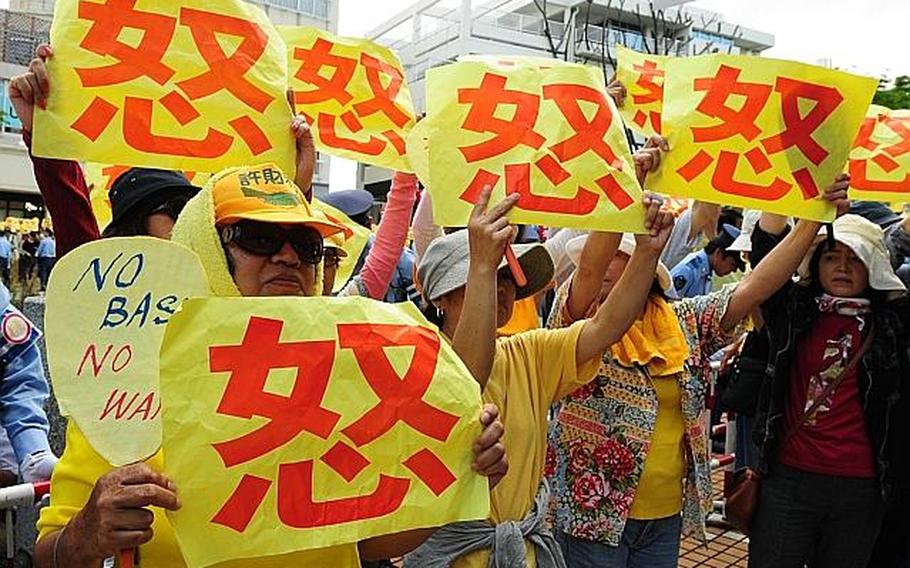 MISAWA AIR BASE, Japan &mdash; The Japanese government played a double game with its own citizens and the U.S. government over the controversial Futenma relocation plan, according to documents analyzed this week by the Asahi Shimbun newspaper.

Despite publicly promising Okinawans that it was committed to moving U.S. Marine Corps Air Station Futenma off the island, the government of former Prime Minister Yukio Hatoyama was telling U.S. officials that Japan would stick to a plan to keep the operations on Okinawa, the newspaper reported Wednesday, basing its stories on some of the classified diplomatic cables released by the website Wikileaks.

During Hatoyama&rsquo;s campaign for prime minister in late 2009, his staff told voters they would work to find alternatives to a 2006 U.S.-Japan agreement to move the base from central Okinawa to Henoko, according to the newspaper.

But behind the scenes, &ldquo;they also said that, in the end, Japan would go along with the 2006 agreement if the United States rejected the proposed alternatives,&rdquo; the paper wrote.

Several options have been reviewed in the past by the Japanese government, including a proposal to move the Marine air operations to Kadena Air Base. Other options included Shimoji Island, which is located about 180 miles south of Naha, or Tokunoshima in Kagoshima, about 305 miles north of Naha. Each proposal has been met with furious opposition by the proposed hosting communities.

The newspaper reported that the leaked documents showed that the United States believed that as long as it &ldquo;continued to reject alternatives,&rdquo; Japan would stick to the 2006 agreement.

In February of this year, U.S. Secretary of Defense Robert Gates said he expected Japan to finalize initial design plans for the runway and other components of the Futenma replacement facility in Nago, but those designs have so far failed to materialize.

The paper &mdash; citing the leaked documents &mdash; said that on Dec. 9, 2009, Seiji Maehara, the land minister and state minister in charge of Okinawa, and other officials met with U.S. Ambassador John Roos in Tokyo. A leaked &ldquo;secret&rdquo; document from the U.S. Embassy the next day quoted Maehara as saying, &ldquo;If the U.S. does not agree to any alternative to the existing ... plan, the DPJ would be prepared to go ahead with the current relocation plan and let the coalition break up if necessary after Golden Week (April 29-May 5, 2010),&rdquo; according to the newspaper report.

In May 2010, Japan signed off on the 2006 agreement. The SDP then broke from the coalition and Hatoyama stepped down in June. He was replaced by Naoto Kan, who had campaigned on the promise that Futenma would be moved off the island.

But Kan quickly flipped, saying in December 2010 that U.S. Marine air operations would remain on Okinawa.

A spokesman for the Okinawa governor&rsquo;s office said Wednesday that it was not appropriate to comment on the Asahi reports.

&ldquo;We are yet to fully learn about the content of the cables and it is necessary for us to investigate the facts,&rdquo; Hiromitsu Chinen said.

U.S. Embassy officials in Tokyo could not be reached for comment.