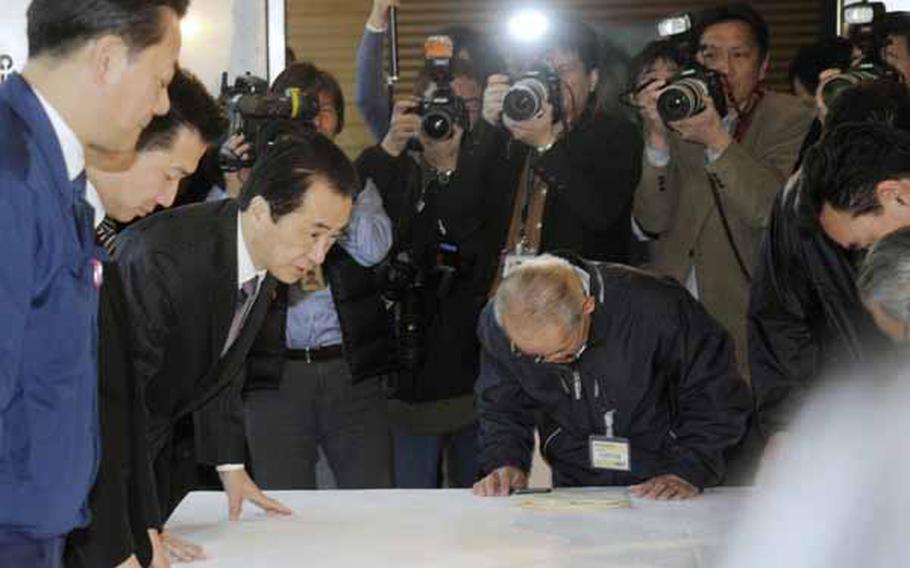 TOKYO, Japan - Prime Minister Naoto Kan (L) bows during a meeting at his office in Tokyo on April 5, 2011, with the mayors of local municipalities near a crisis-hit nuclear power plant in Fukushima Prefecture. Kan promised that the government will bear ultimate responsibility in the ongoing nuclear crisis, with the local chiefs calling for maximum state assistance. (AP)

Workers at the Fukushima Daiichi nuclear power plant have stopped the leaking of highly radioactive water from a cracked concrete pit in the Number 2 reactor, the Japanese utility said Wednesday, according to a Wall Street Journal story.Workers poured 1,560 gallons of the sodium silicate compound &ldquo;water glass&rdquo; through holes around and at the bottom of the pit, a Tokyo Electric Power Company spokesman said, according to the story. The rise of radioactive contamination found in the seawater near the complex had been attributed to the water flowing from the crack of the pit. The radiation level of the water inside the pit was 1,000 millisieverts an hour.Read Release of Irradiated Water Is Stopped, at asia.wsj.com.