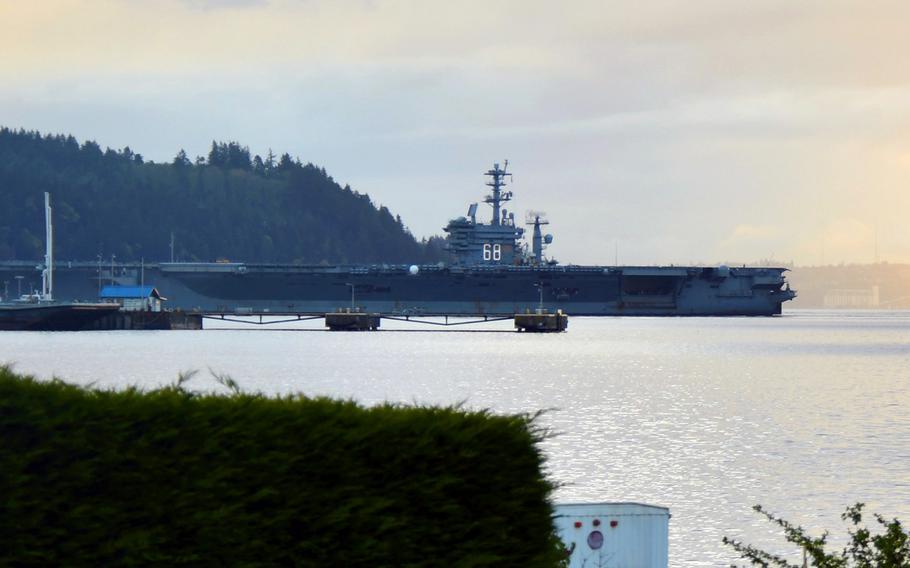 The aircraft carrier USS Nimitz sails in Puget Sound on April 28, 2017, on its way to homeport Naval Base Kitsap-Bremerton, Wash., after finishing its final pre-deployment assessment. (Vaughan Dill/U.S. Navy photo)

The aircraft carrier USS Nimitz sails in Puget Sound on April 28, 2017, on its way to homeport Naval Base Kitsap-Bremerton, Wash., after finishing its final pre-deployment assessment. (Vaughan Dill/U.S. Navy photo) 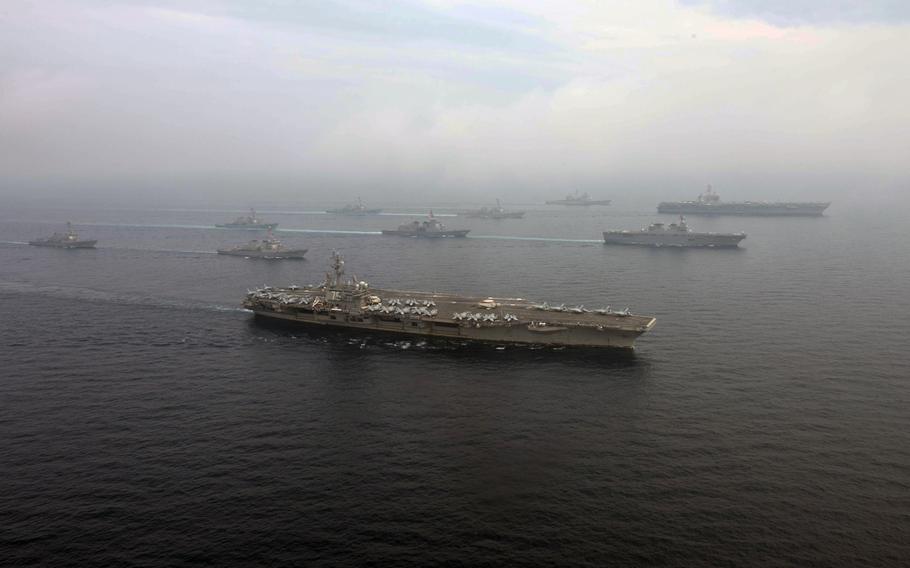 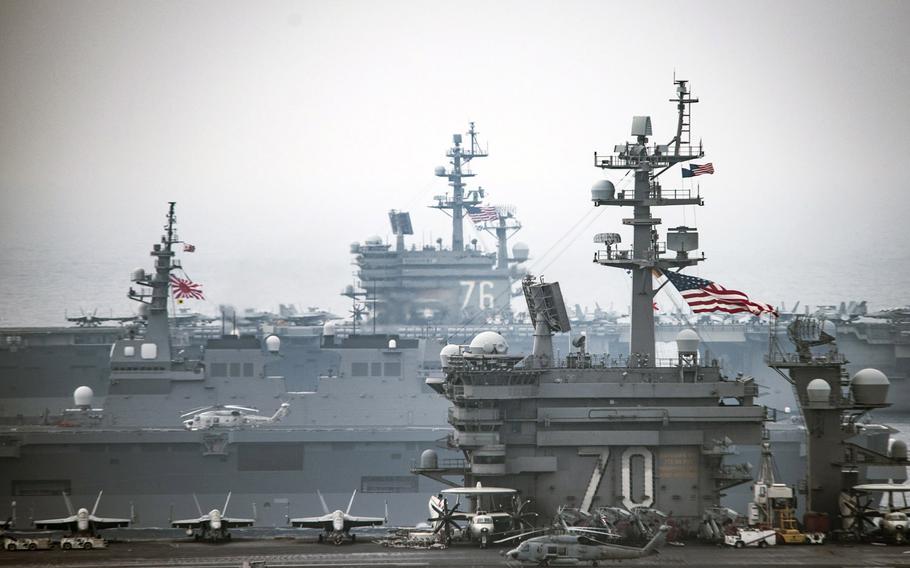 The USS Carl Vinson conducts operations alongside the USS Ronald Reagan in the Sea of Japan June 1, 2017. (Z.A. Landers/U.S. Navy)

Meanwhile, the aircraft carrier USS Nimitz is also headed to the Western Pacific, though Navy officials say it is unlikely that three carriers will remain in the region for long.

In all, 12 warships and two carrier air wings operated together in the Sea of Japan on Thursday.

“These carrier strike groups, as well as two Japan Maritime Self Defense Force ships, were taking advantage of the opportunity to train and improve the way they operate together,” 7th Fleet officials said in a statement. “Operating two carrier strike groups provides a unique capability, one of the many ways the U.S. Navy promotes security, stability, and prosperity throughout the region.”

Dual carrier operations in the Western Pacific are rare and generally calibrated to make a strategic statement.

Before Thursday, the last publicized dual carrier operation in the region came when the Reagan and USS John C. Stennis groups sailed together last year in June in the Philippine Sea. That event came ahead of an international tribunal ruling invalidating Chinese positions on the South China Sea that U.S. Navy officials say undermine freedom of navigation.

Today’s display comes after North Korea’s test-firing of a dozen ballistic missiles this year, despite condemnation from the global community.

The Japanese contingent included the destroyer JS Ashigara and the flattop helicopter destroyer JS Hyuga, both of which operated within the Reagan group.

Vinson will continue its scheduled operations in the Western Pacific but is expected to return to its San Diego homeport shortly, 7th Fleet officials said Thursday.

Meanwhile, Nimitz will first sail south to Naval Air Station North Island in San Diego, where it will meet up with the destroyers USS Kidd and USS Shoup, as well as other vessels, Navy officials said.

Military officials have said that the Nimitz departure was preplanned and not in response to North Korean provocations.

“It is not uncommon for incoming and outgoing carrier strike groups’ transit timing to overlap as one begins a deployment and the other concludes theirs,” U.S. Pacific Fleet spokesman Lt. Cmdr. William Knight said in a statement.

The Vinson strike group began its deployment from San Diego on Jan. 5.

In April, Adm. Harry Harris, head of U.S. Pacific Command, ordered the Vinson group to cut short a training exercise near Singapore and head toward the Korean peninsula because of missile tests and concerns that North Korea might conduct a nuclear test.

The Nimitz strike group last deployed on a patrol in 2013. In the meantime, it underwent extended maintenance and hosted the first carrier landings of the Navy’s new F-35C fighter jets.

Wyatt Olson reported for this story from Fort Shafter, Hawaii.