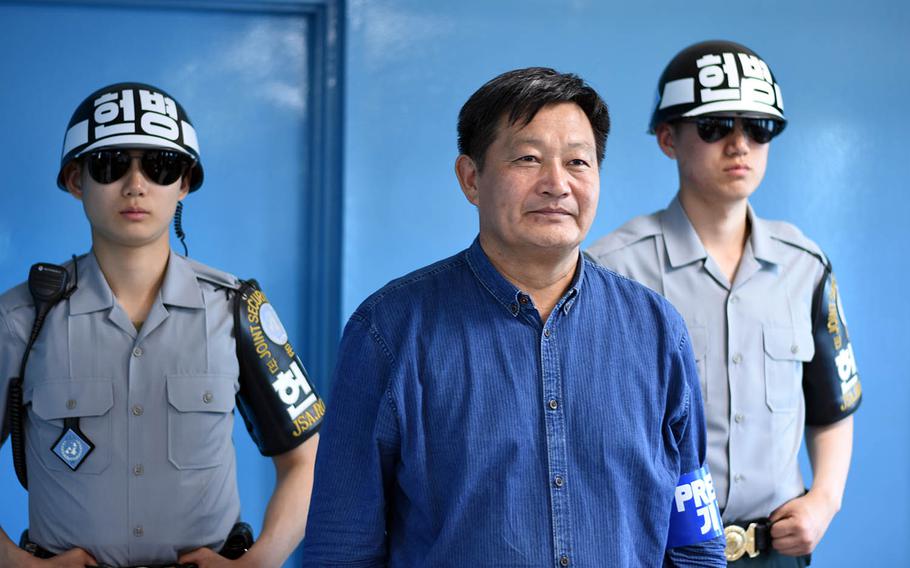 Buy Photo
A man poses with South Korean soldiers on the North Korean side of the Joint Security Area during a tour on May 24, 2017. (Aaron Kidd/Stars and Stripes)

SEOUL, South Korea — Public tours to the truce village that straddles the tense Korean border will resume next month, officials said Monday, more than a year after civilian access was suspended due to an outbreak of African swine fever.

The reopening will start with a trial tour on Nov. 4, followed by the official start to the program on Nov. 6, the Unification Ministry said in a press release.

The South Korean government said it will begin with small-scale tours because of the continued threat from African swine fever and the coronavirus.

“The government will expand tours in number and scale as the situation improves,” it added.

The Unification Ministry said it was handling tours only for South Koreans. Foreigners will have to go through a different process that will be arranged by the United Nations Command, which oversees the area under the armistice that ended the 1950-53 war.

“UNC is implementing a graduated restart and will provide details on the expansion of tours as they become available … for service members, families and other guests,” spokesman Col. Lee Peters told Stars and Stripes in an email.

Panmunjom, also known as the Joint Security Area, is in the heart of the 155-mile-long Demilitarized Zone that divides the peninsula and has long been a popular tourist destination.

It’s the only point in the buffer zone where North Korean and U.N. Command troops come face to face.

Highlights of the tour will include the main building on the South Korean side known as the Freedom House, the blue conference room that was the site of the armistice signing, the tree that was planted by Moon and Kim in 2018 and the footbridge where they had a private chat.

South Korea didn’t notify the North about plans to resume tours because visitors will be limited to its side of the border, the ministry said.

President Moon Jae-in’s administration has been eager to restart the tours as it seeks to turn the area into “an area of peace.”

Soldiers on both sides stopped carrying weapons and vacated some guard posts as part of an agreement between Moon and North Korean leader Kim Jong Un during their first summit in 2018.

Vows to open the space for free movement remain unfulfilled, but the government has eased restrictions for South Korean visitors and created an online registration site to allow individuals and families to apply instead of needing to go through agencies.

Peters stressed that the U.S.-led U.N. Command doesn’t charge for tours, but tour agencies who take visitors there may charge a fee. “Those transactions are neither managed nor tracked by UNC,” he said.

In the past, foreigners were able to book tours through agencies that usually charged about $100 for the full tour to the Joint Security Area, which included visits to a former North Korean infiltration tunnel and an observatory overlooking the communist state.

Panmunjom has played a key role in inter-Korean peace negotiations and U.S.-led efforts to persuade the North to abandon its nuclear weapons program.

In addition to the historic inter-Korean summit in 2018, President Donald Trump held an impromptu meeting there with Kim last year when Trump became the first sitting U.S. president to step into the communist state.