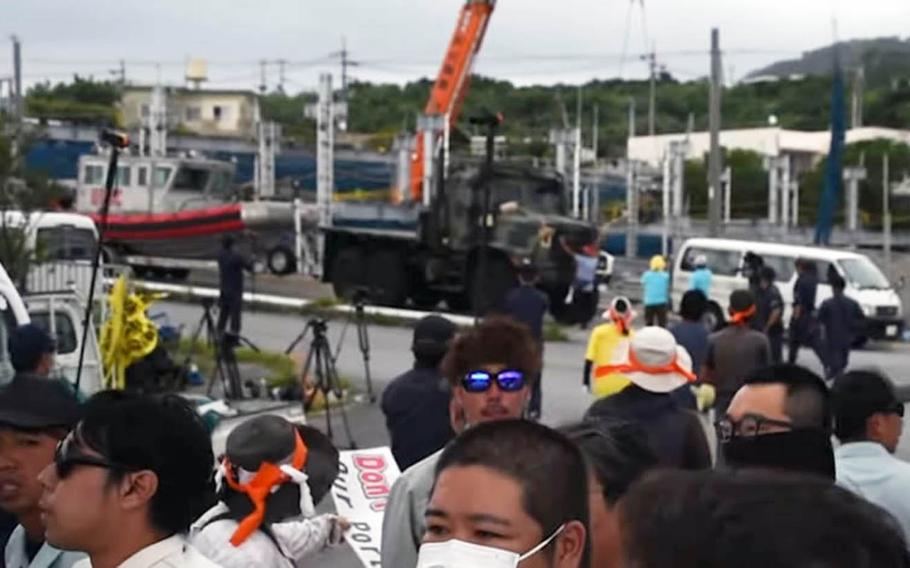 A screenshot from a YouTube video shows demonstrators gathered to oppose the Marine Corps launching a small craft from Motobu Port on Okinawa, Japan, on Tuesday, Sept. 18, 2019. (YouTube)

A screenshot from a YouTube video shows demonstrators gathered to oppose the Marine Corps launching a small craft from Motobu Port on Okinawa, Japan, on Tuesday, Sept. 18, 2019. (YouTube) A screenshot from a YouTube video shows some who protested a Marine Corps boat entering Motobu Port on Okinawa, Japan, blocking the truck hauling the vessel on Tuesday, Sept. 17, 2019. (YouTube) A screenshot from a YouTube video shows protesters opposed to the Marine Corps launching a small craft from Motobu Port on Okinawa, Japan, facing the truck hauling the boat on Tuesday, Sept. 17, 2019. (YouTube)

CAMP FOSTER, Okinawa — A U.S. Marine Corps truck delivering a boat to a local port for routine training Tuesday was met by about 100 Okinawan demonstrators and turned away after a nine-hour protest, according to a local newspaper report.

The incident started at approximately 7 a.m. when a Marine truck towing a 32-foot boat arrived at Motobu Port from Camp Schwab, the Marine base in Henoko, The Okinawa Times reported.

The truck and boat were met by peaceful protesters who blocked their entry by sitting in front of the gate. Others gathered across the street, according to a video of the scene posted on YouTube.

The video shows what appears to be a contingent of Japanese police in a temporary line between the boat and the protestors. Motobu police were unavailable for comment Wednesday. No arrests were reported.

The truck and boat remained at the gate until approximately 4:40 p.m., when they departed, The Okinawa Times said.

Port officials said the status of forces agreement between the U.S. and Japan allows the U.S. military to use Japanese ports. The Marines on Sept. 10 notified port officials they planned to launch the boat at Motobu, a port spokesman said. The boat was to be used in parachute training at nearby Ie Island, according to the Japan Ministry of Defense.

“Under the SOFA agreement, the Marines informed us on Tuesday, Sept. 10, of their intention to use our port,” the port spokesman said. “The prefectural government notified the press on Friday. The press released the news in Saturday’s paper.”

Okinawa prefectural officials said Wednesday they asked the Marines not to use the port, but when their request went unheeded, they released the information to local media.

The prefectural officials said that while they honor the SOFA, launching the boat at Motobu could worry locals and interfere with commercial ships operating there.

He said the U.S. military was moving its parachute training back to Ie Island as a result of complaints from an Okinawa citizen and the prefectural government about parachute training on Kadena Air Base. Motobu Port, on the northwestern coast of Okinawa’s main island, is about five miles from Ie Island.

The U.S. military had originally conducted parachute training at Ie but moved it to Kadena in response to environmental factors, Kono told reporters.

However, the move to Kadena angered locals, Kono said, so he demanded it be returned to Ie.

“Due to bad weather and high waves, it’s hard to conduct the training at Ie Island,” Kono said. “With that boat, they can practice much less on Kadena and do so in Ie Island.”

Marine officials did not respond to requests seeking comment Wednesday. The Okinawa Times reported the Marines used Motobu Port because it’s about 15 miles from Camp Schwab, while the alternative, Kadena Marina, is over 30 miles away.

“If we don’t use Motobu port, we have to use Kadena Marina, which is further from Camp Schwab, and we have to use the local roads to transport the boat to either port,” the newspaper quoted an unidentified Marine official as saying. “We thought about the stress and burden to the locals and used the Motobu Port instead.”

The prefectural spokesman said information about the boat launch was released Friday in the interest of transparency, not to rally protesters to the site.