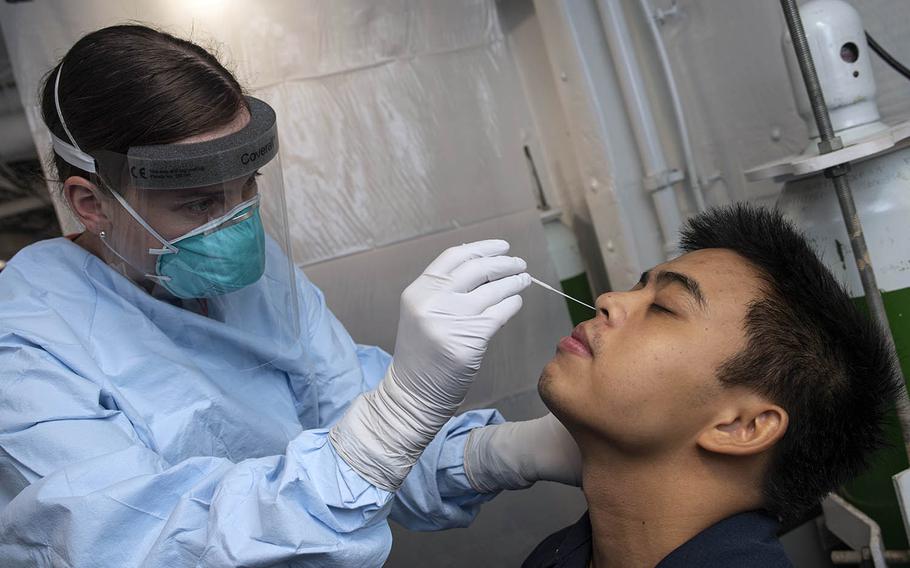 YOKOTA AIR BASE, Japan — Coronavirus testing for 135,000 U.S. military personnel in Japan has been handed off to private laboratories under a pair of $13 million contracts, officials said Monday.

Bio Medical Laboratories and Special Reference Laboratories, both based in Tokyo, have been processing coronavirus tests for U.S. personnel in Japan since July 27, said Gary Scullin, a contracting officer at the home of U.S. Forces Japan in western Tokyo.

Air Force, Army and Navy laboratories in Japan were processing tests earlier in the year, he said.

The private labs, which also analyze tests for the Japanese government, must provide results within 48 hours under the contracts, which run for a year, Scullin said.

USFJ, citing operational security, declined to provide the number of tests administered to its personnel; however, Scullin said it’s in the thousands.

The private labs provide all services and materials associated with the tests. Both use automated equipment to process them, he said.

The private labs free up military personnel who had been involved in time-consuming analysis of test samples, to perform their regular duties, Miller said.

“All our personnel do is collect the tests (swabs) and send them back to the lab by courier,” he said. “We get results in 36 to 42 hours.”

The regulatory standards for the private labs are the same as those used by military facilities, he said.

Japan barred most foreigners, including Americans, from entering the country earlier this year due to the pandemic, but made an exception for U.S. military personnel who must quarantine for 14 days after they arrive. All new arrivals or travelers returning to Japan from abroad must be tested before entering quarantine and at least once more until they’re free of the virus, according to USFJ.

“Being good stewards of the exception to travel for SOFA (status of forces agreement) personnel means testing them when they enter the country … and making sure we get results in an acceptable time,” Miller said.