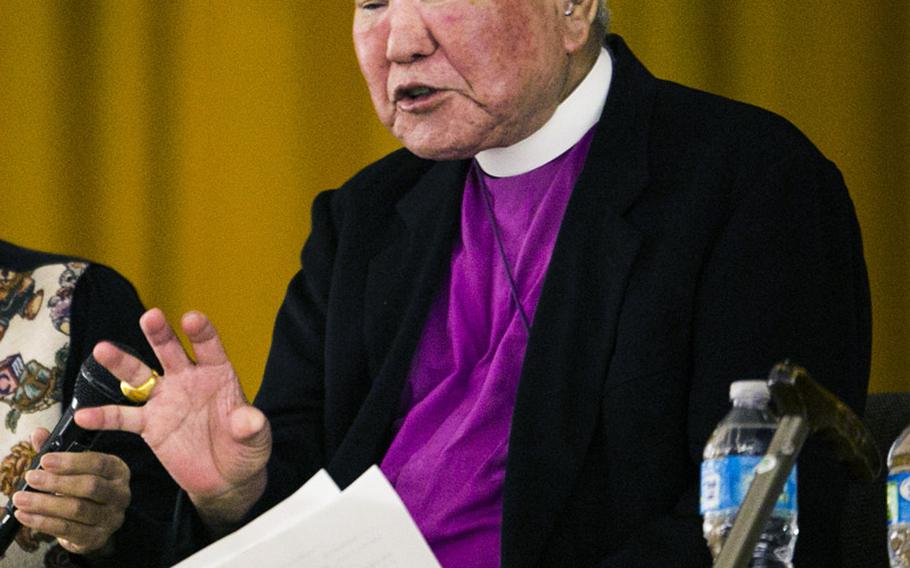 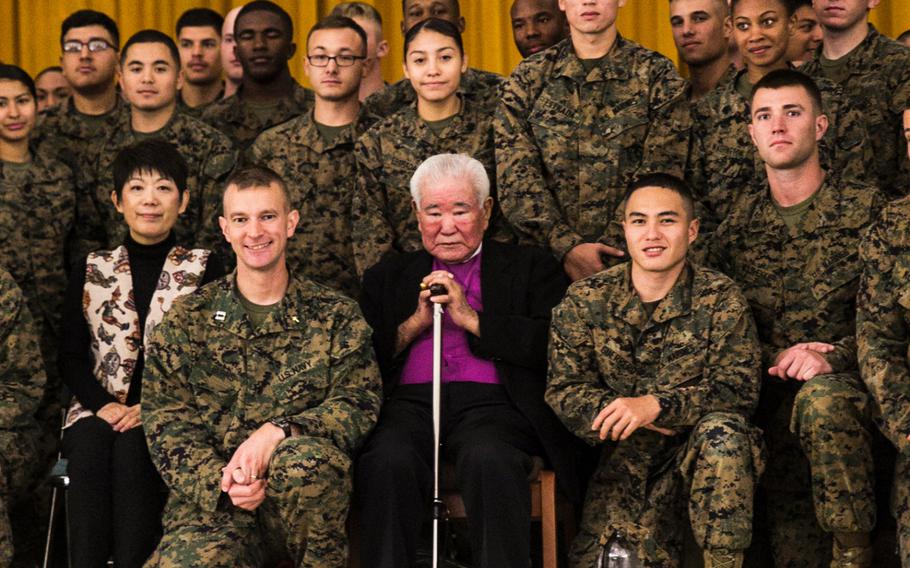 CAMP HANSEN, Okinawa — Paul Saneaki Nakamura prepared three times to carry out a suicide attack for Japan during World War II. It took the country’s near-death for him to find religion and become a priest.

Nakamura recently shared his experiences — which included training as a kamikaze pilot, human torpedo and suicide bomber — with about 300 Marines at Camp Hansen to help them see war from a different perspective.

“I have always thought that my experience might be well compared to the historical Exodus,” he said, referring to the biblical story of the Jews who left Egypt, led by Moses to the Promised Land.

The 87-year-old retired Anglican bishop grew up on Okinawa as militarism swept across Japan. Like many others, he became an ultra-nationalist who firmly believed in selfless devotion to his country. He worshipped the emperor as god; offering his life to the emperor was the ultimate virtue.

When he was in middle school, World War II had spread to the Pacific theater following Japan’s attack on Pearl Harbor on Dec. 7, 1941. Students were taught how to use a rifle, targeting a straw figure of an American, he said.

War propaganda flooded the news with the imperial army’s victories, especially in China, he said.

“We were convinced that the Japanese army with its great success was god’s army with a special divine favor,” he said.

In the final stages of the war, however, it was clear that Japan was fighting a losing battle, so special suicide corps were organized. Some dive-bombed enemy ships.

The first such attack was carried out in October 1944 over the Philippines’ Leyte Gulf.

The desperate operations killed thousands of young men — the kamikaze pilots and the sailors aboard the vessels.

At the time, there were two categories of men in Japan, Nakamura said. Eldest sons were allowed to live to continue their family lines. The rest were expected to offer their lives to the emperor. As a second son, Nakamura was in the latter category.

In March 1944, 17-year-old Nakamura volunteered to be a kamikaze pilot and left Okinawa for the mainland for training. An airplane shortage hampered preparations, he said.

“What was provided us was a glider,” with trainees forced to use their imagination for the instruments on a plane, he said.

So the training focused solely on austere self-discipline, not on practical technique. After all, no skills were required except for flying straight, he said.

“We were taught that since we were such a small island nation and because we were one country fighting against many, great sacrifices were required,” he said. If one kamikaze pilot could blow up a vessel carrying hundreds of sailors, he would be a hero, and more importantly, Japan could win the war, he said.

“It was this conviction that many young men were willing and desiring to serve their country,” he said.

He still vividly remembers the last words of a comrade — “You can have my dinner tonight.” — before he took off for a kamikaze mission. It was strictly a one-way trip; no fuel was loaded for a return flight. Nakamura and his fellow trainees drank water together with him from a sake cup, a Japanese ritual to see someone off for his final parting.

Before Nakamura’s turn for a final drink came, the imperial navy ran out of airplanes for the operation. But other opportunities loomed.

The special suicide corps also consisted of suicide motorboats and human torpedos. Nakamura was chosen for the latter. The one-man submarine had no escape hatch: Once you went in, there was no way to get out, he said.

“Let me say that this was of no consequence because it was a way that I could serve,” he said. “I had the faith of a martyr.”

But human torpedoes also ran out before his turn came, so he was chosen to be a suicide bomber. He was sent to Sasebo, where he was taught to dig a hole, hide with a bomb strapped around his body and wait for an enemy tank to come. “I dug many holes and waited for my turn to come,” he said.

Before that happened, the war ended.

He was discharged from the imperial army, but there was no way to return to Okinawa. Inflation quickly set in, and his money became almost useless.

“I became a beggar on the street,” he said. He spent many nights on a railroad station bench. Hunger tortured him, but finding a job was not easy when the entire country was devastated.

“I must admit that I really longed for my previous life when I was in the imperial army,” where there was no freedom, but he had food, warm clothes and a place to sleep.

“You remember when the Israelites were wandering in the desert, they were always longing to return to Egypt,” he said. “At that time of my life, in despair and loneliness, I lost my dignity as a human being.”

His only hope was to reunite with his parents, who were safe in Taiwan. To please them, he decided to go to college at night and pay for tuition with a day job. He was 19.

He also began to go to church, where the warm, friendly people made him feel at home.

“My earlier desire of wanting to return to the kamikaze and the imperial army was no longer with me,” he said.

During a class discussion one day, other students argued that the emperor system allowed Japan to remain as a unified nation after the war, unlike Germany, Korea or Vietnam.

Anger and shock ran through him because no one seemed to be aware that Okinawa had been severed from the rest of Japan after WWII. Until that moment, he never had doubted his identity as a full-fledged Japanese.

“I could not stay in the classroom,” he said. Tears welled up and he found himself running toward his church. The priest cried with him and told him that Japan has dead, because if you could not feel the pain when your little finger was cut off, it meant that your body was dead.

“Then he told me to become a priest to help Japan to restore life, like Jesus restored Lazarus to life four days after his death,” he said.

When he finally returned to Okinawa, he found that all of the eldest sons who had stayed there were killed in the Battle of Okinawa. Survivor’s guilt bitterly tormented him.

Then he discovered that American occupation forces were not “demons,” as war propaganda had taughter him. Instead, they provided food, supplies and medical care to his people.

After becoming a priest, he went on a missionary trip throughout Japan, urging people to come back to life through Jesus Christ.

When he looked back, he sees God’s hand in his life, he said.

“Possibly in some strange way that I could not understand, God had spared my life as He had a plan for my life.”

While hearing about war experiences might not be rare for the Marines who hear Nakamura speak, listening to an account from the other side of the war was stirring for some.

“It is interesting to learn that kamikaze’s mission was solely to attack the United States,” said Cpl. Gabriel Estrada, 20, of Los Angeles. “Also it is amazing for his big change in life from an attacker to now a bishop.”

Sgt. Alan Wolthekker, 24, of Tampa, Fla., heard war stories from his grandfather, who fought in the Pacific theater as a merchant marine. But he was only 10 to 12 years old and didn’t understand, he said.

As a Marine who has served in Afghanistan, he found Nakamura’s experience very inspiring.

“Now his story made me feel more close to what he has accomplished.”