Pressured to speed returns, the US military says South Korea can have 15 bases now 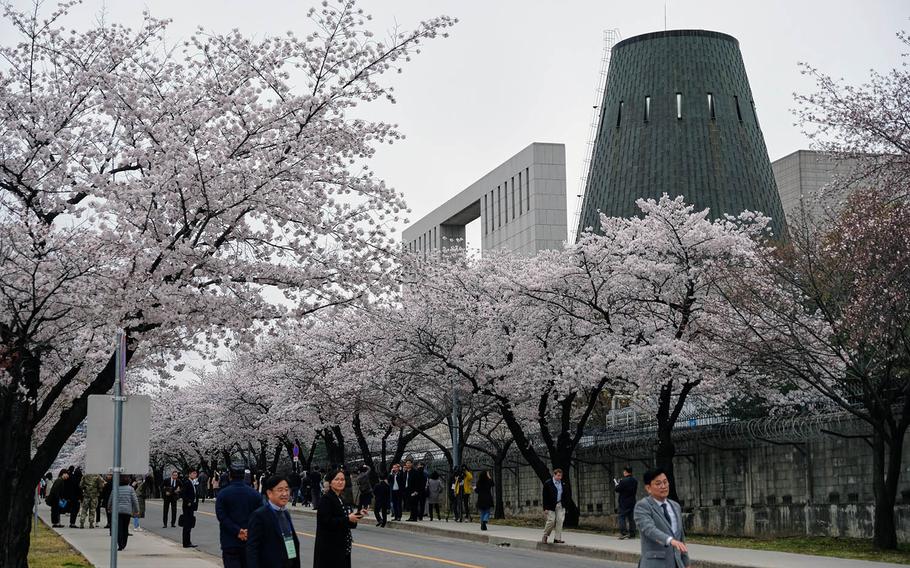 SEOUL, South Korea — The U.S. military wants to set the record straight as it faces South Korean pressure to expedite the handover of bases as part of a drawn-out relocation plan.

U.S. Forces Korea is ready to turn over more than half of the bases now, including parts of Yongsan Garrison in Seoul, the command said Wednesday in a rare public display of frustration.

South Korea “recently announced that it desired to expedite the return process of 26 U.S. military installations,” USFK said. “Fifteen of the 26 U.S. military installations, including four sites specifically requested for transfer at the earliest possible date … have been vacated, closed and available for transfer to the (South Korean) government.”

“Two parcels of Yongsan Garrison have been vacated, closed and available for transfer since 2014 with another three parcels since summer 2019 for a total of five parcels available now,” it added.

The statement came amid concerns of a widening rift in the longstanding U.S.-South Korean alliance after Seoul ended a U.S.-backed military intelligence sharing pact with Japan.

The allies also are gearing up for defense cost-sharing negotiations that are likely to be contentious since President Donald Trump has demanded that the South sharply increase its contribution.

Both sides have insisted they remain committed to the alliance, which stems from the 1950-53 Korean War, despite the differences.

“As a testament to our U.S.-(South Korean) alliance, USFK remains committed to returning installations as expeditiously as possible to (South Korean) government control,” in accordance with relevant agreements, the USFK press release said.

When asked about the statement, a South Korean military official told Stars and Stripes that the 15 bases are still the subject of negotiations over environmental concerns “so they haven’t been handed over to the Republic of Korea yet.”

The plan to move most American forces from bases in Seoul and near the border with North Korea stems from agreements reached in the early 2000s, but it was frequently delayed due to construction problems and quality-control issues.

South Korea has paid for most of the nearly $11 billion expansion of Camp Humphreys, a former helicopter outpost south of Seoul, into the shiny new home for the main military headquarters and more than 30,000 American troops, families and civilian employees.

Yongsan, a sprawling base in the heart of Seoul that had served as military headquarters since the war, has been shrinking from within by closing many facilities as the bulk of the population has moved to Humphreys and other southern hubs.

However, the transition process has been slow in large part because of disputes over dealing with polluted soil and other environmental concerns as the land is returned. The status of forces agreement between the two countries essentially throws the burden of paying for any clean-up on South Korea.

Earlier this month, South Korea’s presidential office said it would redouble efforts for the early return of the 26 bases, including Yongsan.

That prompted media reports speculating that President Moon Jae-in was seeking to complete the relocation before his six-year term ends in 2022.

“We’re correcting the record,” USFK spokesman Col. Lee Peters said Wednesday. “The perception is that USFK is holding up the process when the reality is we’ve already got 15 of 26 bases and five parcels of Yongsan that are ready to be turned over to the (South Korean) government.”

The remaining 11 still house troops who can’t be moved until facilities are ready. “You can’t move somebody to a place that doesn’t exist or is being built,” he said.

Four installations on South Korea’s wish list have been closed for years, including Camp Eagle and Camp Long that have been available since December 2010; the Shea Range parcel located at Camp Hovey since October 2012; and parcels of Camp Market since February 2015, according to USFK.

Seoul also stated its intent “to initiate the return process of Yongsan within this year,” it said.

South Koreans have long been eager to regain control of Yongsan, which was originally on the outskirts of an impoverished Seoul but has become prime real estate since the South Korean capital has grown into one of Asia’s most prosperous cities.

The tree-lined base is expected to eventually be transformed into a park similar to New York City’s Central Park.

The population on the Army garrison has dropped from a peak of more than 25,000 to just over 5,000 after the relocation to Humphreys. The last major unit will move after the new hospital on Humphreys opens in mid-November, allowing the medical facility on Yongsan to close.

Seoul and Washington also have agreed to move the Combined Forces Command to Humphreys instead of keeping it in Seoul.

Garrison officials recently outlined plans for closing most facilities by the end of the year and ending on-post family housing by July 2020 but said the transition process is expected to take a few more years.

“As we vacate and close areas, we will be barricading those areas. There’s no change to the perimeter, the actual footprint” in the meantime, garrison commander Col. Monica Washington said during an Aug. 29 town hall-style meeting.