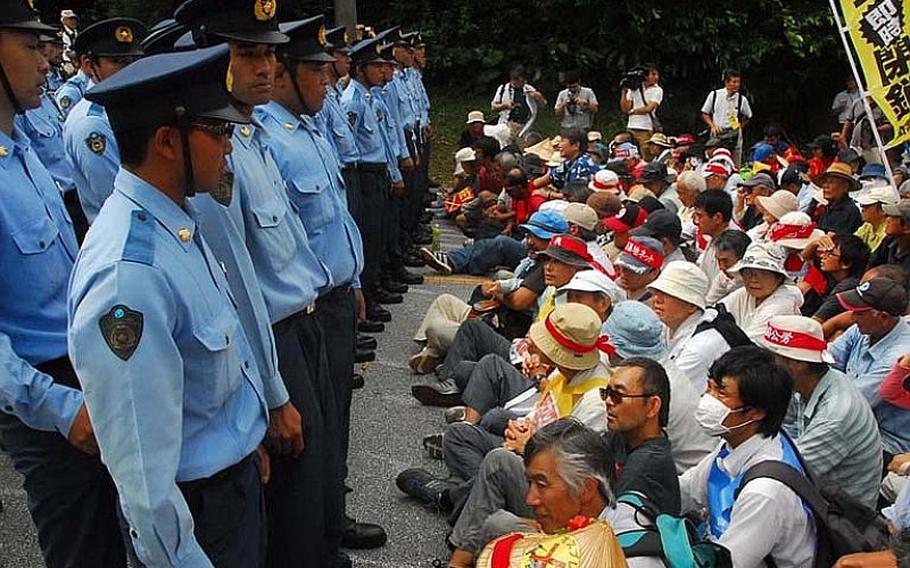 Japanese police stand guard over demonstrators who blocked the main gate of the Futenma air station Sept. 28, 2012, to protest the planned deployment of the controversial Osprey aircraft to Okinawa. U.S. Air Force talk of deploying the tilt-rotor aircraft to Japan is sparking fears more may be headed to Okinawa. (Travis Tritten/Stars and Stripes)

CAMP FOSTER, Okinawa — Air Force talk of deploying tilt-rotor Osprey aircraft to Japan sparked fears this week that more of the hybrid aircraft may be headed to Okinawa and rekindled a public controversy that strained U.S.-Japan relations last year.

Okinawa leaders said unequivocally Wednesday they oppose any new deployment of Ospreys to U.S. bases on the island following Air Force Secretary Michael Donley’s recent disclosure that the service is interested in stationing its version of the aircraft in Japan.

The U.S. and Japan’s decision to deploy Marine Corps Ospreys to Okinawa last fall, despite deep opposition and concerns over safety, led to public demonstrations that nearly shut down the Futenma air station where the aircraft are based. Months later, those Ospreys remain a rallying point for opponents of the large U.S. military presence on the island.

The Pentagon has said there are currently no plans to send the Air Force CV-22s to Japan but Donley’s comment during a news conference Friday has some local leaders believing it may be inevitable that the U.S. will make a second attempt at moving Ospreys to Okinawa, which is home to Kadena Air Base, the largest base of its kind in the Asia-Pacific region.

“The U.S. government first makes the CV-22 deployment plan public and then tries to dodge it, while the Japanese government will play ignorant until the very last minute,” said Chatan Mayor Masaharu Noguni, whose city sits between Futenma and Kadena. “This is exactly the same pattern we had gone through when the MV-22s were deployed to Futenma.”

Noguni said another forced deployment could push Okinawans into a confrontation with the military.

Last year, an Osprey crash in Africa killed two Marines, and the crash of an Air Force V-22 in Florida destroyed the aircraft and injured the crew. The incidents caused many in Japan to believe the aircraft are inherently unsafe, despite independent investigations by the U.S. and Japan that determined military crews were to blame.

Susumu Matayoshi, head of the Okinawa governor’s executive office, traveled to Washington D.C., last week and met with the Department of Defense. He told Stars and Stripes that Christopher Johnston, director for Northeast Asia, Office of the Secretary of Defense, said a deployment of CV-22s has been studied within the Air Force but nothing is definite, including the locations and timeline.

“I clearly conveyed our stance against deployment of CV-22s to Okinawa,” Matayoshi said. “Anxiety over the safety record of the Ospreys has not gone yet, and protest activities go on.”

The Air Force declined to comment on the issue Wednesday and referred questions to the Department of Defense. Pentagon spokesman George Little said this week the DOD is evaluating a range of possible basing options for the CV-22.

Tokyo has denied the U.S. has shared any deployment plans.

On Wednesday, Japan Defense Minister Itsunori Onodera traveled to Okinawa and discussed the Air Force Ospreys with the governor’s office, which warned against moving any more of the aircraft to bases here.

Onodera told a news conference afterward the warning caught him by surprise and that he assured local officials there are no such plans at this time.