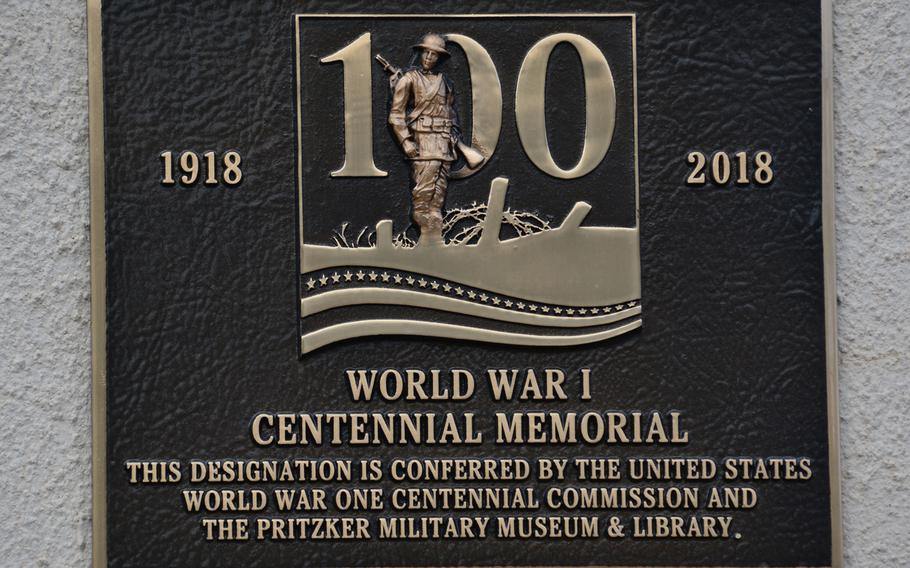 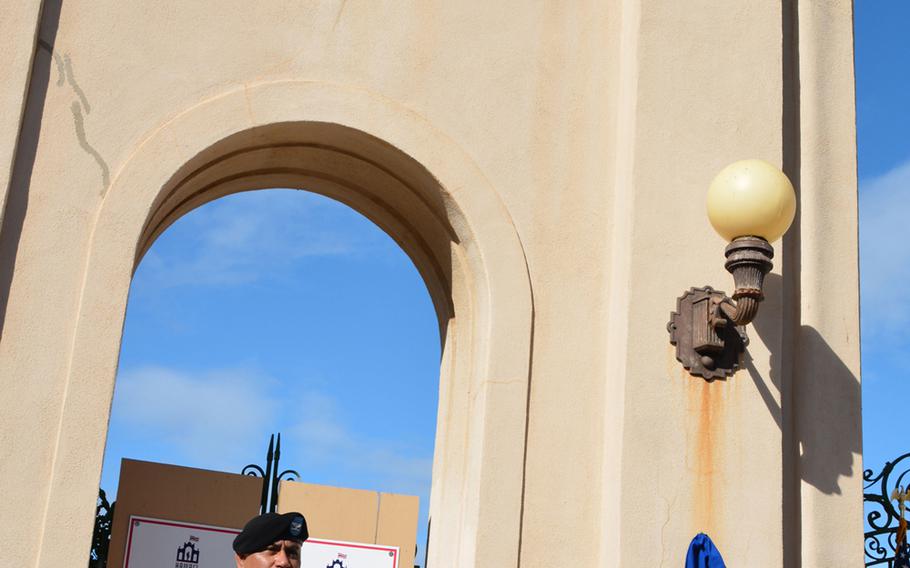 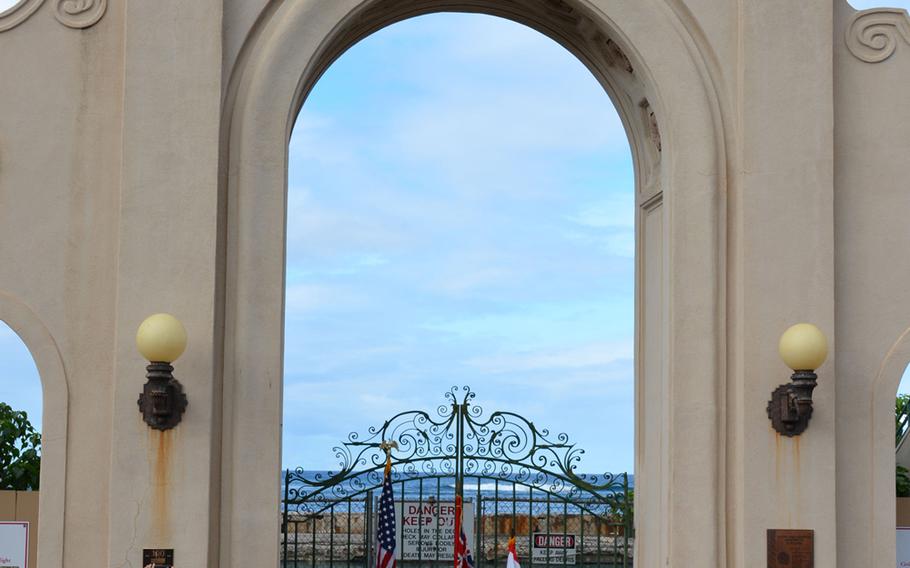 Buy Photo
The entry arch to the Waikiki Natatorium War Memorial, commemorating those who fought in World War I, is listed on the National Registers of Historic Places and has designated a National Treasure by the National Trust for Historic Preservation. (Wyatt Olson/Stars and Stripes) 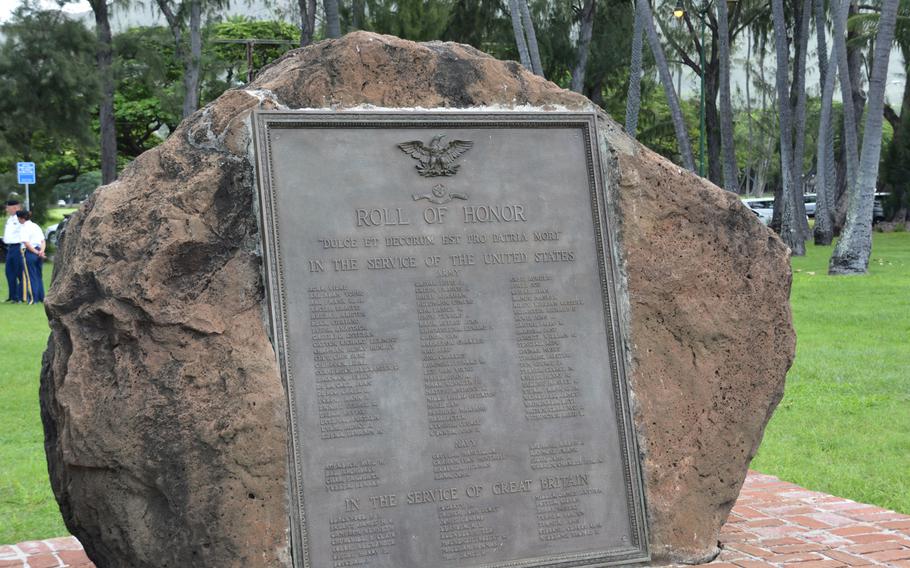 Buy Photo
A "Roll of Honor" monument lists the Hawaiian men who died fighting in World War I. It stands near the Waikiki Natatorium War Memorial, commemorating those who fought in that war. (Wyatt Olson/Stars and Stripes) 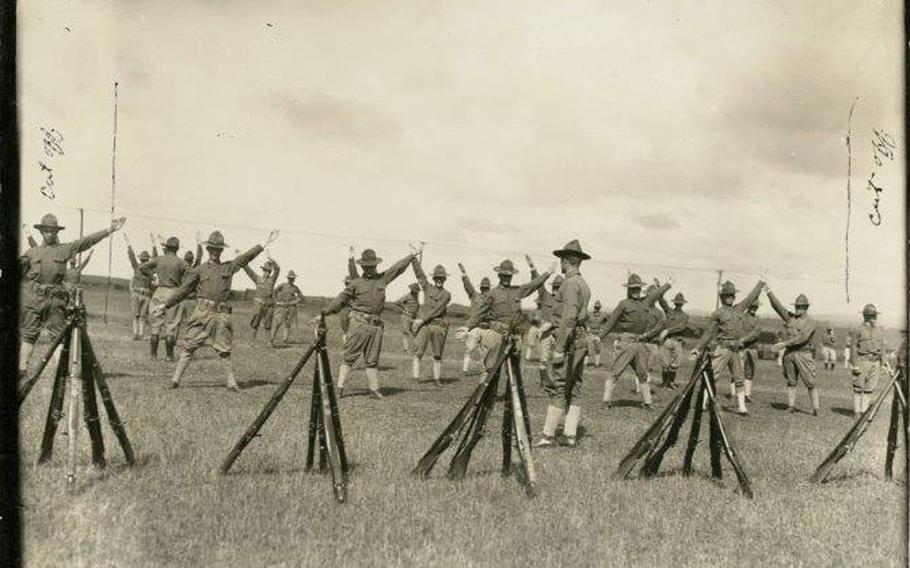 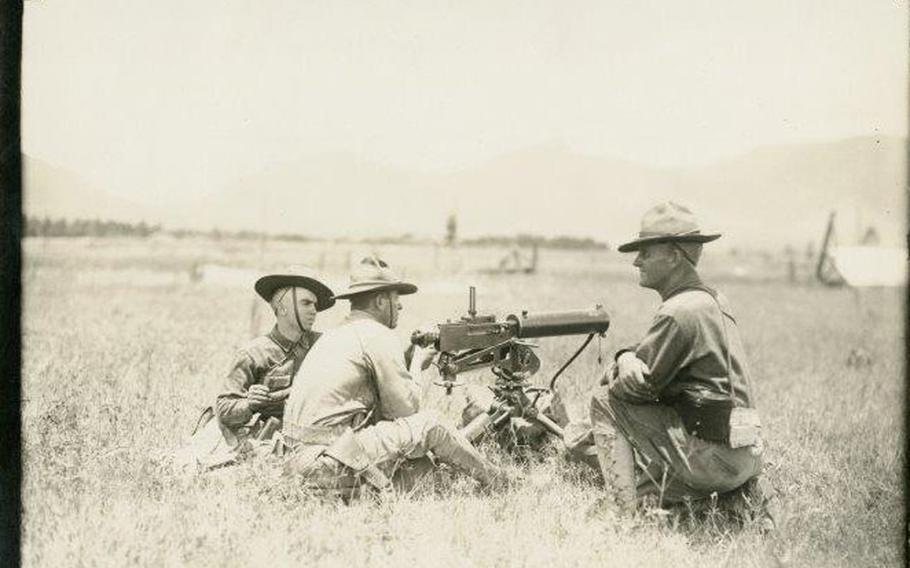 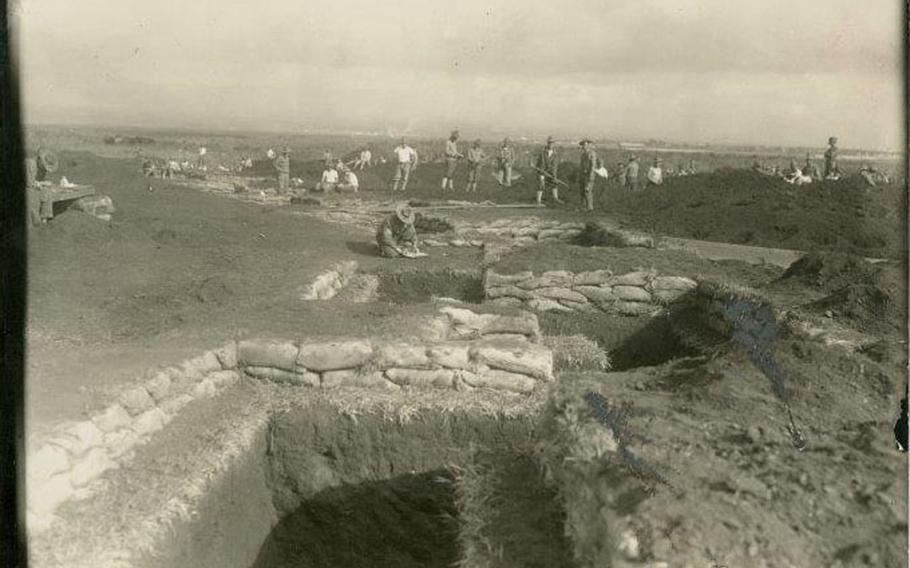 WAIKIKI NATATORIUM WAR MEMORIAL, Hawaii – The new plaque commemorating Hawaii’s role in World War I is small, but the image upon it reflects the nature of the grinding, precedent-breaking nature of that struggle 100 years ago.

Shortly before its unveiling Friday on the façade of the 90-year-old Waikiki Natatorium War Memorial, Army Reservist Col. Kenneth Tafao told the small audience that the plaque “captures the spirit of World War I and the horrible conditions” troops faced – including chemical warfare and endless days in muddy trenches.

“The image of the plaque has a soldier standing tall amongst the concertina wire and the trenches, with the number 100 behind the soldier,” said Tafao, deputy commander of support for the 9th Mission Support Command at Fort Shafter.

“The image of the plaque is compelling and captures the spirit of the proud Hawaiian who served. World War I taught us that modern warfare is horrible and destructive,” he said.

The plaque is part of the 100 Cities/100 Memorials Program sponsored by the U.S. World War One Centennial Commission.

The plaques are intended to “honor the names of those who served and the history of the communities where they lived,” Kenneth Clarke, who originated the program, said in a statement.

Hawaii Gov. David Ige directed the establishment of a state WWI centennial task force in 2015 in response to a congressional act calling for projects to commemorate the end of that war on Nov. 11, 1918.

Although Hawaii was then an American territory, more than 10,000 men volunteered to serve in the armed forces, among the highest rates for U.S. states and territories; 101 lost their lives.

Hawaii, however, had been a haven for the Imperial German Navy from its then-enemy Japan prior to the U.S. entering the war in the spring of 1917, said Anita Manning, a local historian.

“Before the U.S. joined the war, German ships are seeking refuge in Honolulu Harbor from Japanese who are patrolling the Pacific,” she said. “Remember, Germany had colonies in the Pacific along with the French and the British. There’s actually a sinking outside the 3-mile limit [of Hawaii]. Then when Hawaii joins the war, we seize those ships.”

Statewide campaigns kicked off urging residents to eat only locally available foods to curtail the number of supply ships needed for imports, giving rise to the Banana Consuming Propaganda Committee, among others, she said.

The fledgling Hawaii Naval Militia, intended to parallel the Hawaii National Guard, drilled aboard the USS St. Louis in the summer of 1916, in preparation for possibly joining the war.

The first Hawaiians to die in World War I were killed a few days before the U.S. declared war on April 6, 1917. Six sailors from Hawaii were among those who died when their merchant cargo ship, the S.S. Aztec, was torpedoed by a German submarine off the coast of France.

“Like the rest of the nation, Hawaii responded to the call for military service,” Arthur Tulak, chairman of the Hawaii World War Centennial Task Force, told the audience.

“On June 1, 1918, more than 5,500 soldiers of the Hawaii [National] Guard were mobilized for active service at a ceremony conducted at Iolani Palace,” he said. “That mobilization remains the largest mobilization in Hawaii National Guard history.”

The 1918 armistice came as thousands of U.S. “doughboys” were preparing to head overseas, many already aboard ships on the Atlantic, he said.

This was the 22nd event held by the Hawaii task force, with its largest ceremony planned for Nov. 11.

Its concluding ceremony is on June 28, 2019, marking the 100th anniversary of the signing of the Treaty of Versailles, which formally brought about the end of World War I.