Philippines to pull out of Golan Heights, Liberia 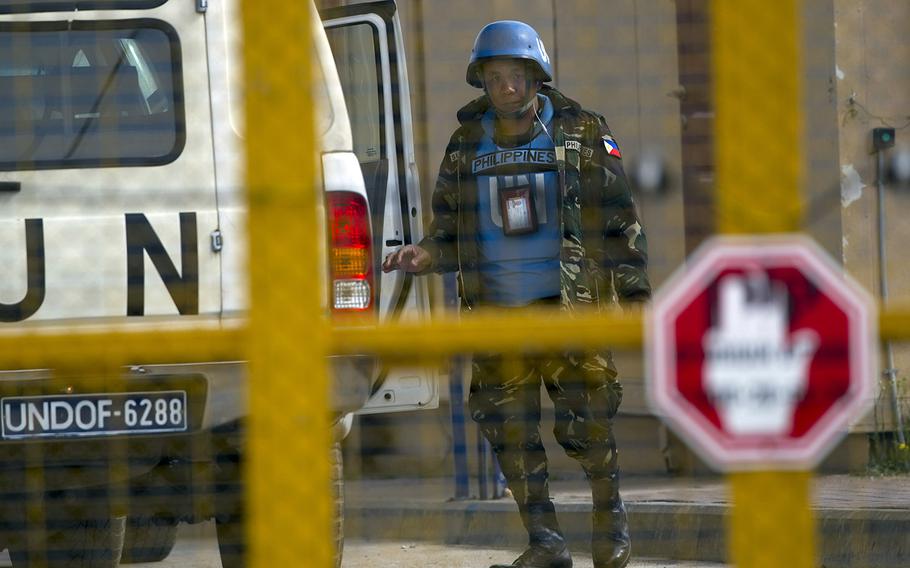 In this March 8, 2013 file photo, a U.N. peacekeeper from the Philippines UNDOF force crosses to Syria at the Quneitra Crossing between Syria and the Israeli-controlled Golan Heights. (AP file photo)

MANILA, Philippines — The Philippine government said Saturday that it would bring home its peacekeeping forces from the Golan Heights amid the deteriorating security in the region and withdraw its troops from Liberia because of the Ebola outbreak.

The 331 Filipino U.N. troops in the Golan Heights will be sent home after their tour of duty ends in October and the 115 peacekeepers in Liberia will be "repatriated as soon as possible," Department of National Defense spokesman Peter Paul Galvez said.

"Amidst the volatile security environment in the Middle East and North African region, the Philippines prioritizes the safety and security of its troops, but remains committed to the peacekeeping missions of the United Nations," Galvez said in a statement.

He said the repatriation of the Filipinos from Liberia was due to the "rising health risk posed by the outbreak of Ebola virus in Africa."

Following the abductions and the escalating hostilities between Syrian rebels and government troops in the U.N.-patrolled buffer zone that separates Syria from the Israeli-occupied plateau, Philippine Foreign Secretary Albert del Rosario asked President Benigno Aquino III to withdraw the troops.

Del Rosario later reversed his recommendation after the United Nations promised to bolster the peacekeepers' security, including providing them with more self-defense weapons and armor.

The Philippines has been sending peacekeeping contingents to the Golan Heights since 2009 and to Liberia since 2003.

Galvez said the Philippines' 156 peacekeepers in Haiti would continue with their mission.