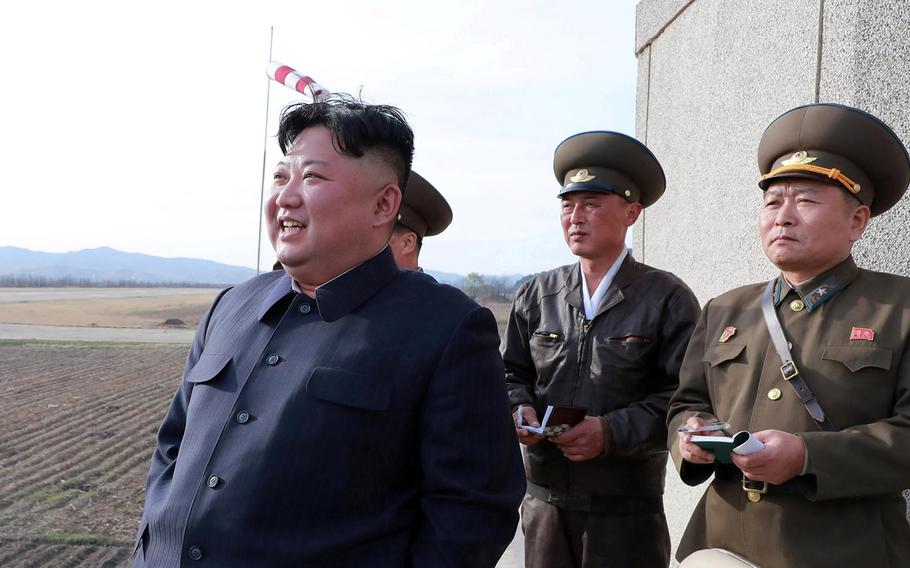 SEOUL, South Korea — North Korea test-fired a new “tactical guided weapon,” it said Thursday, and called for the removal of Secretary of State Mike Pompeo from nuclear talks as the communist state shows increasing frustration over the stalled negotiations.

In Washington, Acting Defense Secretary Patrick Shanahan confirmed that North Korea conducted a test launch but said it did not involve a ballistic weapon and did not trigger any change in U.S. military operations.

North Korean leader Kim Jong Un supervised Wednesday’s test and praised it for having “very weighty significance in increasing the combat power” of the North Korean army, according to the state-run Korean Central News Agency.

KCNA didn’t provide details about the weapons system, which it called a new type of “tactical guided weapon” that showed the ability to be loaded with “a powerful warhead.” It said the test was conducted by the Academy of Defense Science.

It was the first known North Korean military move since the Feb. 27-28 Hanoi summit between Kim and President Donald Trump collapsed without agreement due to sharp differences over whether to trade sanctions relief for disarmament steps.

Both sides have said they remain open to diplomacy. However, Kim warned last week that continued deadlock risked reviving tensions and set an end-of-year deadline for the United States to offer a mutually acceptable approach to negotiations.

His office said it convened a national security council session Thursday to discuss how to facilitate inter-Korean dialogue and denuclearization talks after the test.

Kim and Trump insist they maintain a good relationship. But the North has blamed Pompeo and national security adviser John Bolton for derailing the summit by taking a hard line against its desire for a reciprocal approach that would include rewards such as sanctions relief for steps already taken toward denuclearization.

The president said he was forced to “walk away” without a deal because the North demanded the removal of all recent sanctions that the United States believes are vital to persuade the communist state to give up its nuclear weapons.

North Korea’s Foreign Ministry urged Trump to remove Pompeo as his top negotiator, accusing the secretary of state of “self-indulgence” and “reckless remarks” that have undermined negotiations.

“I am afraid that, if Pompeo engages in the talks again, the table will be lousy once again and the talks will become entangled,” the ministry’s department of American affairs Kwon Jong Gun said, according to KCNA.

“Therefore, even in the case of possible resumption of the dialogue with the U.S., I wish our dialogue counterpart would be not Pompeo” but another person “who is more careful and mature in communicating with us,” the news agency reported.

It was a response to Pompeo’s remarks earlier this week in which he dismissed Kim’s warning in a speech on Friday that set an end-of-year deadline for the United States to adopt a mutually acceptable approach to talks or risk reviving tensions.

The top U.S. diplomat insisted that the North Korean leader had personally reassured him of his commitment to denuclearization and expressed a desire to accomplish it by the end of the year.

“Everyone has a clear interpretation of his speech which says that the U.S. should change its way of calculation and come up with responsive measures before the end of the year,” Kwon was quoted as saying while being careful to reiterate praise for Trump.

Pompeo had no immediate comment but has waved off past personal criticism relayed by the state-run media and maintained that the two countries are making progress in talks.

Russia, meanwhile, confirmed that President Vladimir Putin will hold a summit with Kim later this month in Russia, another sign that Kim appears to be hedging his bets amid the impasse with the United States.

A series of nuclear and missile tests by North Korea in 2016-17 sharply raised tensions as Trump and Kim traded threats of war. But the situation calmed after diplomatic efforts gained momentum last year.

The North also announced a long-range missile and nuclear-testing moratorium, although the communist state also test-fired what it called an “ultramodern tactical weapon” in November.

Trump has cited the testing moratorium as progress and said he would be disappointed if it resumed.

Experts said Wednesday’s test didn’t appear to be of a banned long-range ballistic missile and may have been aimed at a domestic audience to show the country is maintaining its weapons development despite diplomatic efforts with Washington.

“It’s not as flagrant a violation as an [intercontinental ballistic missile] test. So that gives Trump room to ignore or downplay the test,” said Jean Lee of the Washington, D.C.-based Wilson Center.

“But it is designed to serve as a reminder that North Korea has limited patience - and is continuing to devote attention and resources to defense,” she added.

Lee said the test also was likely aimed at placating hard-liners, “especially after the breakdown at Hanoi.”

Nuclear talks have stalled as the United States insists it will maintain punishing economic sanctions until denuclearization is achieved. The North wants a reciprocal approach that would include rewards for disarmament steps already taken.

Harry Kazianis, the Korean studies director for the U.S.-based Center for the National Interest, noted that Kim never promised to stop all weapons testing.

“Kim is trying to make a statement to the Trump administration that his military potential is growing by the day, and that his regime is becoming frustrated with Washington’s lack of flexibility in recent negotiations,” he said in an emailed statement.