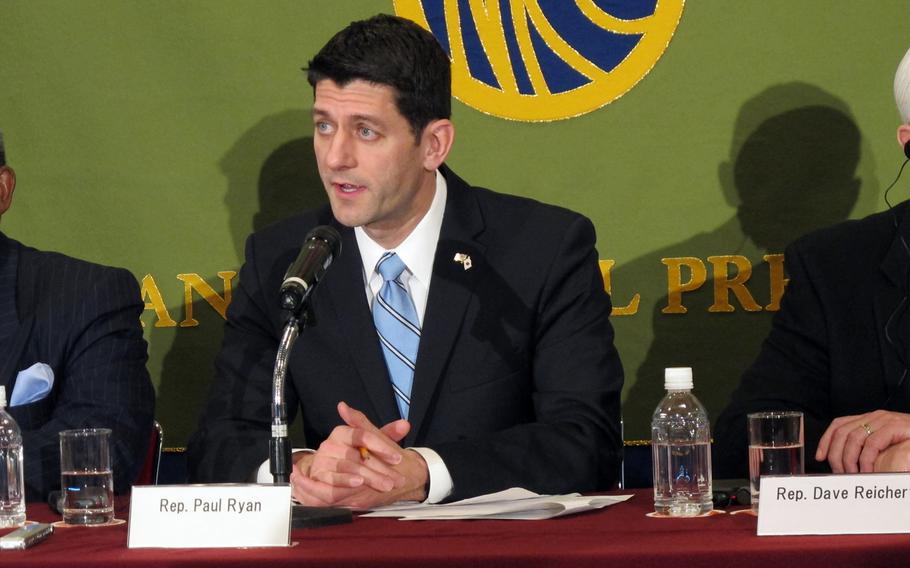 Buy Photo
Rep. Paul Ryan, R-Wisc., speaks with reporters about the Trans-Pacific Partnership on Thursday, Feb. 19, 2015, in Tokyo. Ryan and seven other congressmen were scheduled to meet with Japanese Prime Minister Shinzo Abe later in the day. (Erik Slavin/Stars and Stripes)

Buy Photo
Rep. Paul Ryan, R-Wisc., speaks with reporters about the Trans-Pacific Partnership on Thursday, Feb. 19, 2015, in Tokyo. Ryan and seven other congressmen were scheduled to meet with Japanese Prime Minister Shinzo Abe later in the day. (Erik Slavin/Stars and Stripes) 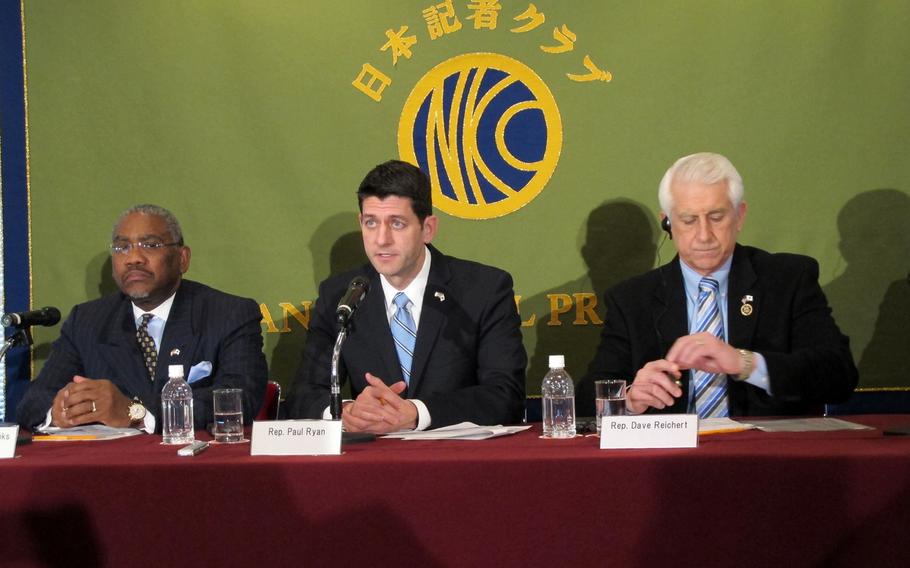 Buy Photo
Rep. Paul Ryan, R-Wisc., center, speaks with reporters about the Trans-Pacific Partnership on Thursday, Feb. 19, 2015, in Tokyo. Ryan and seven other congressmen were scheduled to meet with Japanese Prime Minister Shinzo Abe later in the day. (Erik Slavin/Stars and Stripes)

TOKYO — Eight U.S. congressmen, led by Rep. Paul Ryan, expressed optimism Thursday that the largest economic piece of the U.S. “rebalance” toward Asia will move ahead quickly this spring.

The Trans-Pacific Partnership, a 12-nation agreement that would regulate trade issues impacting almost 40 percent of the world’s economy, is high on the agenda of both leading Republicans and President Barack Obama.

Ryan, who chairs the powerful House Ways and Means Committee, noted that the trade agreement was a rare instance where he and Obama “sound alike.”

“We both need to grow our economies faster,” the Wisconsin Republican said. “We believe we are going to write the rules of global trade in this region and write them in a way that will benefit everybody.”

The congressional delegation was scheduled to speak with Japanese Prime Minister Shinzo Abe and other officials Thursday evening about the agreement.

Even as U.S. foreign policy has focused recently on the Middle East, U.S. officials have maintained that the Asia-Pacific region remains a top long-term priority in terms of security and economics.

As China’s influence grows in the region, the congressional delegates made it clear Thursday that they wanted to preserve U.S. interests. New York Rep. Gregory Meeks, the only Democrat on the trip and the only non-member of the Ways and Means Committee, also framed the agreement as a rare bipartisan effort.

“This trade issue was one of the No. 1 issues on [Obama’s] platform,” Meeks said. “It is important that we have the kind of presence in the region where it is us that set the rules for the 21st century.”

Ryan added that the Ways and Means Committee, which is largely responsible for trade rules, is in the final stages of crafting legislation which would grant Obama the authority to negotiate the trade agreement without possibility of amendment or filibuster by Congress.

While the traditional lines within Congress may be blurred over the issue, Obama still faces opposition from some Republicans and members of his own party who are concerned that the trade agreement will mean lost jobs at home and a larger trade deficit — ills that supporters say the deal will solve.

The agreement has been negotiated in secret, so few details are known.

The U.S. has been reportedly pushing for more restrictive copyright measures in the agreement, portions of which were purportedly leaked last year.

TPP advocates say the measures will protect U.S. intellectual property from counterfeiting, but activist groups like the Electronic Frontier Foundation say they could be used to target whistleblowers and journalists who access classified information, and generally make Internet use more restrictive.

And the non-profit group Public Citizen, which has generally blamed the North American free Trade Agreement and a 2011 agreement with South Korea for job losses and trade deficits, argues that TPP will bring more of the same. The United Auto Workers union has expressed concerns over Japan’s inclusion in the 12-member pact, and called for penalties within TPP should Japan manipulate its currency or use other tactics to undermine the potential agreement.

Ryan acknowledged those concerns Thursday but said Japan and the U.S. would address them apart from the multinational accord.

“We do want to make sure we do not add something to this that makes it more difficult to achieve consensus,” Ryan said.

A 2011 government study estimated that Japanese automakers would gain billions in added revenue if the TPP nations dropped tariffs on their cars.

While the Japanese government supports moving forward with the agreement, it still faces concerns from its powerful agricultural lobby. Japan has a tariff on rice of more than 700 percent, which it uses to protect its domestic farmers.

However, recent media reports have suggested that it has offered to import more U.S. rice as a compromise.