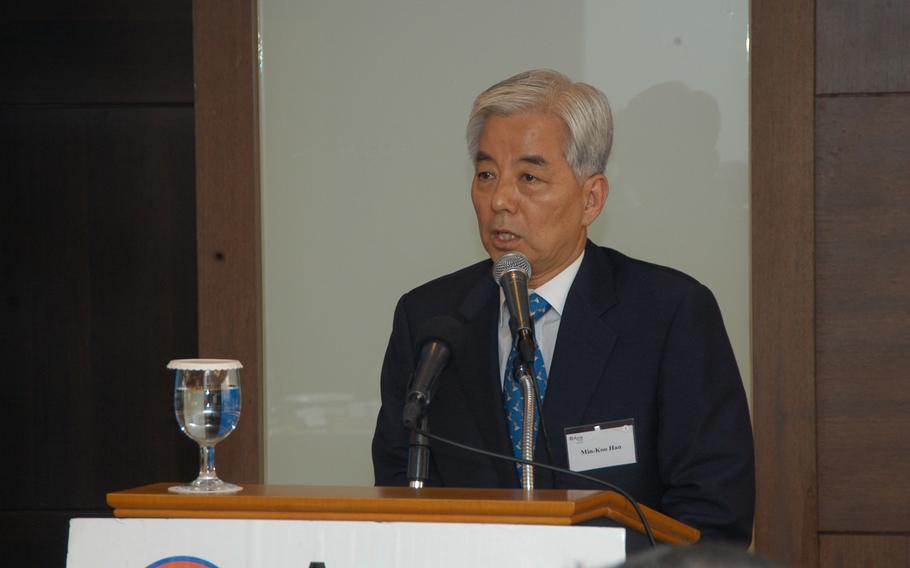 Gen. Han Min-koo, former chairman of the South Korea Joint Chiefs of Staff, speaks May 14, 2013, at a gathering of the Asia Society Korea Center at a Seoul hotel. Han said the time might have come to stop thinking that North Korea can be talked out of pursuing a nuclear weapons program, and instead officials should focus on doing all they can to deter North aggression and being prepared to respond in the event of future provocations. (Jon Rabiroff/Stars and Stripes)

SEOUL — The former chairman of South Korea’s Joint Chiefs of Staff says it might be time to give up on the idea of convincing North Korea to halt its nuclear weapons program and instead focus on deterring its acts of aggression.

“When we look back at the past 20 years of international efforts to resolve this nuclear issue … we can’t help but wonder whether our belief that we can resolve this issue through dialogue maybe was based on hopeful illusion,” Gen. Han Min-koo told an Asia Society Korea Center meeting Tuesday.

He said North Korea “never even once” has given up on its basic objective to use military might to force the reunification of the Korean peninsula on its own terms. And while Pyongyang has agreed several times to halt or even dismantle its nuclear program in exchange for concessions from the West, it has reneged and resumed work each time.

“We need to shatter any illusions we might have had about Pyongyang,” he said through a translator.

He said it would be a mistake for anyone to underestimate the threat posed by North Korea just because it’s small and poor. A successful long-range rocket launch last December was followed by another underground nuclear test in February.

North Korea has the world’s fourth-largest standing military, has shown little regard for its people and has little industry — or anything else — to protect in the event of a conflict aside from the continuing existence of the regime.

“It still maintains a considerable capability to pose a serious threat to not only Seoul, but also other neighboring countries in the region,” he said.

While the U.S. and South Korea have superior conventional forces on the peninsula, he said that becomes “virtually insignificant” if the North is able to develop a nuclear weapons program.

“I personally believe that North Korea’s provocations [and] threats will continue depending on [its] own domestic needs,” and they will likely “take on the form of an odd attack, a localized provocation or creating instability within the Korean peninsula,” said Han, who served as chairman of the Joint Chiefs of Staff from June 2010 to October 2011.

The South Korean military and government were harshly criticized for their weak response to the North’s 2010 attacks on a South warship and border island — incidents that left 50 South Koreans dead.

Han said the South has since moved from a policy of “strategic patience” to a “more active deterrence strategy” toward North Korea.

U.S. and South Korean surveillance of North Korean troop and equipment movements mean the combined forces “will be able to conduct a very timely and effective response” to any future provocations, he said.

The next five to 10 years will be “watershed years for inter-Korea relations,” and the key for the U.S. and South Korea will be to continue to improve their capabilities to deter and respond to future provocations from the North, he said.

In the long term, Han said, “We need to seek a change in North Korea’s regime or we need to make possible unification led by Seoul, not by Pyongyang.

“Our government and our people desire a peaceful unification, and all of our policies are driven by that desire,” he said. “So, if a non-peaceful unification were to occur, god forbid, then that will be a decision made, not by Seoul, but by Pyongyang.”