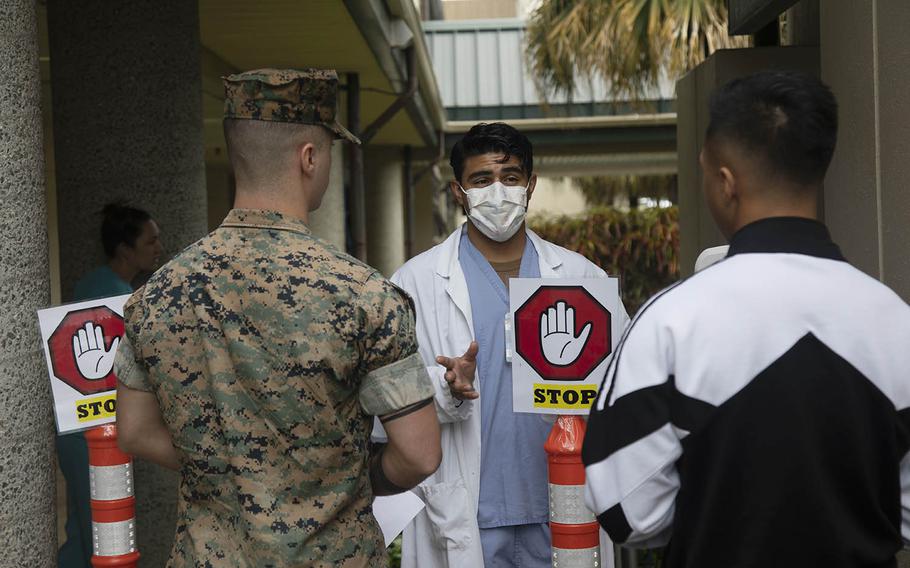 FORT SHAFTER, Hawaii — The parents of a 7-month-old boy enrolled at a child care center at Marine Corps Base Hawaii have filed a complaint over the facility’s use of “family-style” dining, during which caretakers do not wear protective facemasks as they eat meals with children.

Melissa Martin, the boy’s mother and a Defense Department employee, filed a prohibited personnel practices complaint Nov. 22 with the U.S. Office of Special Counsel alleging the practice constitutes a “substantial and specific danger to public health.”

Martin lives on Marine Corps Base Hawaii with her son and husband, who is a noncommissioned officer with the Corps.

“I'm really just looking for my son — and other children that also go to the [child care center] — to be in a safe, healthy place,” Martin said during a phone interview Nov. 22.

A Marine Corps spokesman told Stars and Stripes the base’s Child Development Centers implement distancing between children and staff members during mealtimes to mitigate risk, but the practice of using family-style dining to “role model” and “build healthy eating habits” is continuing.

Hawaii has had 17,840 confirmed coronavirus cases as of Sunday, with 224 deaths. The average daily number of newly reported cases over the past 14 days has been about 90.

For Martin, who requested anonymity for her child and husband, the base’s child care center was her first foray into outside care for her son. Just weeks after he was born, they joined the waitlist for both the child care center on Marine Corps Base Hawaii and a similar facility on Joint Base Pearl Harbor-Hickam, where she works as a lawyer. The former was the first to have an opening.

Because of the pandemic, Martin has been able to work from home, allowing her to watch over her son, she said.

On Oct. 15, she said that she and her husband went to the child care center for orientation, during which the staff assured them the facility was taking all steps necessary to ensure safety during the pandemic.

However, the couple was taken aback, Martin said, when the aide assigned to their son’s classroom lifted her mask away while speaking with them.

“That was kind of a red flag,” Martin said, but the couple rationalized it as an isolated lapse in judgment by the staff member.

The following day, Martin dropped her son off at the center on her way to an appointment. Their temperatures were taken at the door, and they went to her son’s room.

“I found the same aide from before sitting immediately next to an infant, facing each other, with her mask off,” Martin said in her written complaint to the special counsel.

Martin said she was appalled to see such a failure in precaution and immediately took her son out of the center.

In the following weeks, she conveyed her concerns to both the center’s director and then to Patricia Barrera, head of the Family Care Branch.

In an email response to Martin on Oct. 29, Barrera said, “DoD [Instruction] 6060.02 does require family style dining and a social and engaging meal setting; however, our program has made modification on children serving themselves, to reduce the spread of germs.”

Barrera said she was consulting with the base’s public health emergency officer on the issue.

Four days later, Barrera sent Martin a direct quote from the health officer, whose name was not included in the email: “I do not see this as a concern as the children are with these adults all day long. It only becomes an issue if workers or children come to the CDC when they are not feeling good.”

Martin said she was gobsmacked by the official sanctioning of a breach of precaution for the sake of the family-dining policy. The health officer seemed to ignore the possibility that asymptomatic or pre-symptomatic carriers of the virus can still spread the disease but would have a normal body temperature.

“The very notion that this Public Health Officer spoke on behalf of the Base Commander and endorsed chronic and potentially fatal health and safety violations can not go unreported,” Martin wrote in her complaint to the special counsel.

“The Child Development Centers at Marine Corps Base Hawaii are following DoD regulations and the Center for Disease Control (CDC) recommendations with regard to precautionary COVID-19 measures," a base spokesman, Capt. Eric Abrams, said in a statement emailed Wednesday to Stars and Stripes.

“The amount of required close contact between an infant child and a caregiver carries some inherent risk of infection spread, which can be mitigated but not eliminated through regularly sanitizing surfaces, hand washing, and the wearing of face covers,” he said. “The Child Development Centers recognize the value of family-style dining but have implemented modifications to the meal service to be in alignment with the CDC’s COVID recommendations on family-style eating.”

“The Child Development Centers at MCBH implement distancing between children and staff members during mealtimes to help mitigate the risk of removing the face masks, and utilizes mealtimes to role model, promote social skills, and encourage and build healthy eating habits,” Abrams wrote.

Martin and the attorney she hired to file the complaint, Crista Kraics, point out that numerous child care centers of the various services have suspended family-style dining during the pandemic.

In March, the Navy Installations Command announced that family-style dining was among the practices being discontinued at child-care programs due to risk of spreading the coronavirus. The Coast Guard announced a similar decision around the same time.

In late April, a 68-year-old man who worked in the kitchen at a child care center at Marine Corps Base Quantico, Va., contracted the coronavirus from an infected co-worker. He died from complications of COVID-19 on May 26.

“I'm looking for, at the very least, my son to be able to go to a safe place when I need to send him to the child day care center,” Martin said during the interview. “I believe that that's what the day care center is supposed to be. As military families, we put enough on the line. We sacrifice enough that I don't want one more thing to be my son being sacrificed because of a silly rule that could be easily suspended for a period of time.”