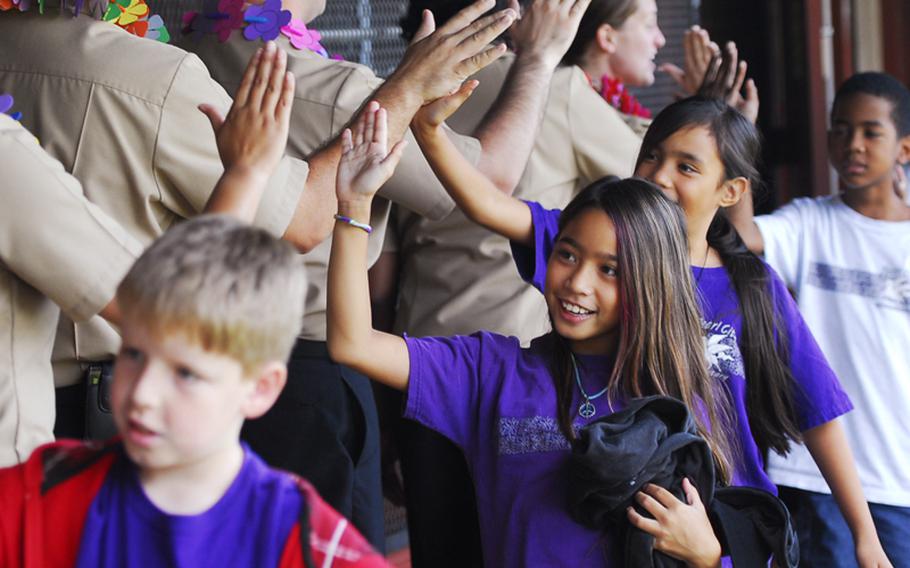 Students from Hawaii's Pearl City Elementary School give Sailors assigned to Commander Navy Region Hawaii high-fives for the command's volunteer work at the school April 26, 2011. CNRH was one of several Hawaii-based commands that participated in the School Partnership Program, a community outreach initiative that partners a military command unit with a local public school. (Mark Logico/U.S. Navy)

YOKOTA AIR BASE, Japan &mdash; The U.S. Pacific Command is in the middle of a $600,000 study to find out why thousands of military families are not sending their school-age children to public schools in Hawaii.

After determining that 9,000 of the eligible 24,000 school-age students in military families were not attending public schools, top military leaders commissioned Johns Hopkins University researchers to focus on attitudes and opinions about the Hawaii education system.

The study, which began in 2009, is expected to conclude in June.

A negative perception about the public schools in Hawaii has persisted within the military for decades, according to Col. William Morrison, the first PACOM officer serving in a new military liaison position on the Hawaii State Board of Education. He was appointed to the board in July by PACOM commander Adm. Robert Willard.

The goal of the Johns Hopkins study, Morrison said, is to better engage Hawaii decision-makers on the concerns and needs of the military community based on &ldquo;solid data instead of rumors or comments.&rdquo;

It&rsquo;s the second study of Hawaii&rsquo;s education system in the last two years.

A 2010 study conducted by the University of Massachusetts Dartmouth for the Department of Defense Education Activity found that much of the negative perception is rooted in &ldquo;a myriad of social, cultural and historical reasons&rdquo; in Hawaii, a native monarchy before being annexed by the U.S. in 1898 and made a state in 1959.

&ldquo;The negative perception appears to be deeply rooted in the local culture and it serves to fuel and reinforce a similar perception among the military families that are stationed in Hawaii as well as a vast network of military families worldwide,&rdquo; according to the Dartmouth study.

Dartmouth researchers said that national standardized test scores and other data indicate that Hawaii public schools don&rsquo;t have as many problems as commonly believed, contradicting state and federal tests and measures, including No Child Left Behind. However, a table accompanying the Dartmouth report showed that Hawaii schools lagged behind other Defense Department school averages in math and reading at all grade levels.

The state and the military have made several changes in recent years to address concerns. The most notable, perhaps, came in December 2010 when Gov. Neil Abercrombie restored 17 days to the school calendar, which were cut in 2008 amid budget shortfalls. &ldquo;Furlough Fridays&rdquo; remain one of the state&rsquo;s most notorious education failures within the military community and among locals.

Morrison&rsquo;s appointment as a liaison to the Hawaii education board could be seen as a signal that the Defense Department is taking the matter seriously.

The position on the school board was created by the governor&rsquo;s office after voters decided in March that they wanted an appointed board instead of an elected one. The board&rsquo;s decisions drive everything from what books students read to how schools are managed and built. Morrison does not get to vote, but he is privy to all board business.

In a meeting earlier this year, Horner said, he assured the PACOM commander that &ldquo;the military had a seat at the table.&rdquo;

Military kids and parents are more susceptible to emotional and psychological problems caused by war deployments and the constant moves associated with military life.

In Hawaii, military students make up 8 percent of the school population, according to DODEA, which runs schools at most overseas locations where about 80 percent of military children are educated, and runs only a handful of schools at military bases in the U.S.

DODEA doles out millions of dollars in grant money to Hawaii and other school communities with high military populations. Hawaii and others districts, such as El Paso Independent in Texas and San Diego Unified in California, received $78 million in DODEA grants this year. Those districts also receive federal impact aid money, given to U.S. school districts affected by government agencies and operations.

Parents can take the Hawaii Military Child Survey at www.hawaiikids.org.

&ldquo;We&rsquo;re not satisfied with where we are and look forward to participation of the military,&rdquo; Horner told Stars and Stripes.

&ldquo;We can improve our schools, and we must.&rdquo;