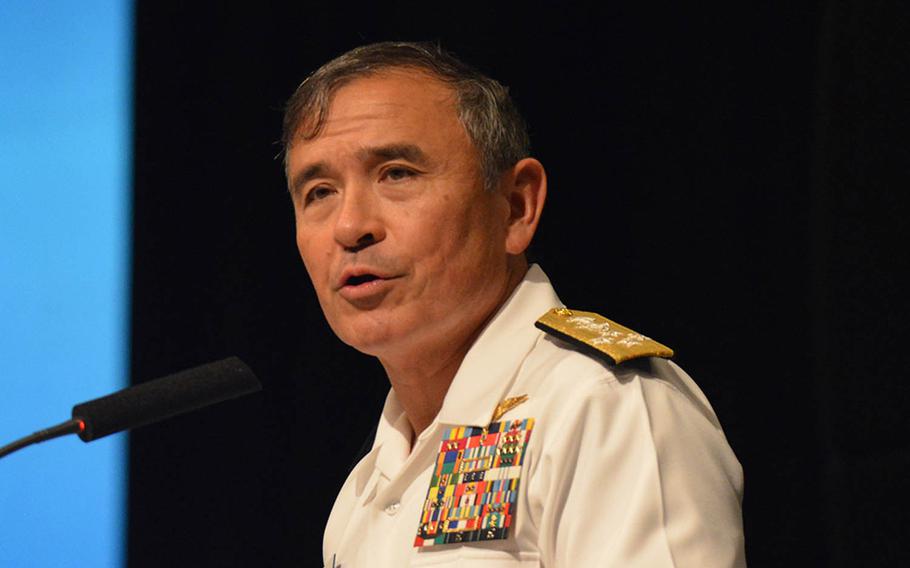 “I believe the time has come where our land forces project power from the land onto the other domains and operate seamlessly across shared domains,” Adm. Harry Harris said during a speech at a three-day symposium in Honolulu sponsored by the Association of the U.S. Army.

“I’m confident we can make this happen.”

That means “the Army’s got to be able to sink ships, neutralize satellites, shoot down missiles and deny the enemy the ability to command and control its forces,” he said.

PACOM overseas a huge swath of the Indo-Asia-Pacific region, which geographically is mostly water. But, as military officials are quick to point out, armies are the primary armed service in more than two dozen of the region’s countries.

As deployments to Iraq and Afghanistan have slowed and America’s focus has shifted to Asia through the Pacific rebalance, the Army has sought a more robust role in the region. In 2014, U.S. Army Pacific kicked off Pacific Pathways, in which soldiers deploy into the region for multiple exercises, operating somewhat like an expeditionary force.

But Harris asked the Army to consider an even greater role.

Imagine, he said, a Navy F-18 Hornet fighter jet acquiring a target at sea, but then passing the information through a sophisticated communication system to, say, an Army High Mobility Artillery Rocket System, or HIMARS, which has a top range of roughly 200 miles.

“Wow, a Navy fighter communicating with an Army ground-based system to kill a sea-based target,” Harris said. And though this scenario might sound “aspirational,” he said, such a capability was demonstrated during last year’s Northern Edge exercise in Alaska.

“So this is well within the realm of possible,” Harris said.

The Army’s core mission is to fight and win America’s wars in the land domain, which means “putting your soldiers in the mud,” he said. “You’re good at it. But this is not to say that we shouldn’t consider opportunities for the Army to project power in other domains.”

A look back to the Army’s not-too-distant history reveals it has done so in the past.

During the Civil War, the Army used coastal artillery to fire on ships. The Army Coast Artillery Corps was formed to defend the nation’s coasts, and in the early 1900s batteries were built at a fort in Hawaii. The coastal corps was also charged with the installation and management of controlled harbor mine fields and manned anti-aircraft batteries.

“But as time passed and the need for longer-range and more mobile defenses increased, we developed maritime and air capabilities that allowed the Army to divest itself of the coastal defense mission,” Harris said.

The Coast Artillery Corps was disbanded in the 1950s, and the anti-aircraft defenders morphed into the Air Defense Artillery.

“In the 21st century, I believe the Army should consider getting back into some aspects of this business because we now face an inverse problem,” Harris said. “Countries like China, Iran and Russia are challenging our ability to project power ashore, from the sea, through ever-more sophisticated anti-ship missiles. More and more, adversary rocket forces are projecting power over the water in order to protect their control on land.

“We need systems that enable the Army to project power over water from the shore.”

The Army should establish a “Fort HIMARS,” he said, “a highly mobile, networked, lethal weapons system with long reach. And if we get this right, the Army will kill the archer instead of dealing with all of its arrows.”

Army Lt. Gen. Stephen R. Lanza, commander of I Corps, said Harris’ charge is “exactly what you want from a joint commander.”