Servicemembers from the U.S., Thailand, China and Singapore participate in a ceremony for exercise Cobra Gold 2016 in Wuat Ban Mak, Saraburi, Thailand. Pacific Pathways 2016 kicked off this month with the arrival of soldiers from Joint Base Lewis-McChord's 1-2 Stryker Brigade Combat Team in Thailand for the exercise. (Miguel Rosales/U.S. Marine Corps)

Servicemembers from the U.S., Thailand, China and Singapore participate in a ceremony for exercise Cobra Gold 2016 in Wuat Ban Mak, Saraburi, Thailand. Pacific Pathways 2016 kicked off this month with the arrival of soldiers from Joint Base Lewis-McChord's 1-2 Stryker Brigade Combat Team in Thailand for the exercise. (Miguel Rosales/U.S. Marine Corps) 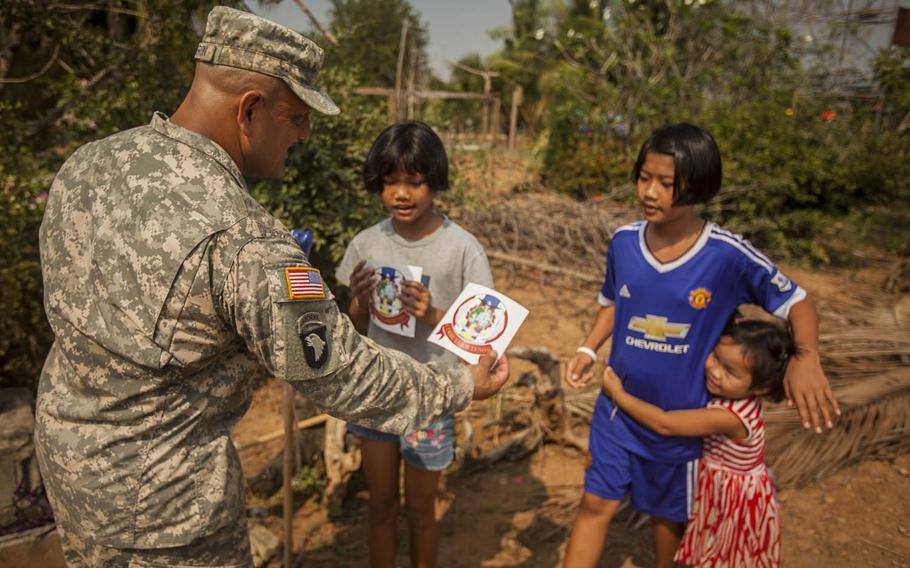 A U.S. soldier passes out exercise stickers to Thai children during Cobra Gold 2016, in Lop Buri, Thailand. Elements of several Army brigades will deploy for a dozen exercises, including Cobra Gold, across the Pacific this year as part of a program designed to boost the service's engagement in the region. (Hilda Becerra/U.S. Marine Corps)

Elements of several brigades will deploy for a dozen exercises across the Pacific this year as part of a program designed to boost the Army’s engagement in the region.

Pacific Pathways 2016 kicked off this month with the arrival of soldiers from Joint Base Lewis-McChord’s 1-2 Stryker Brigade Combat Team for a three-month deployment starting with the multinational Cobra Gold exercises in Thailand, said Col. Rumi Nielson-Green, a U.S. Army Pacific spokeswoman. In March, they will head to South Korea for Foal Eagle, then to the Philippines in April and May for Balikatan.

This is the fifth Pacific Pathways mission since the program launched in 2014. There will be two more deployments this year, each involving an infantry task force of 600 to 1,100 troops, Nielson-Green said.

The exercises encompassed by Pacific Pathways have been going on for years. The difference is that troops participating in them spend more time in the region and bring heavy equipment such as Stryker armored personnel carriers and helicopters, she said. The cost of the deployments, over and above what’s spent on the exercises, will be $39 million this year. The funds pay for air movement of personnel and strategic sealift of their equipment, Nielson-Green said.

The linking of exercises allows the Army to practice at a tactical, operational and strategic level, Nielson-Green said.

"It includes everything from coming into a foreign port with allies and partners with different requirements to logistics challenges to legal concerns and agreement," she said. "You don’t really think about all those things if you are just falling in on a set of equipment."

The units involved in the mission deploy at the peak of readiness, often after spending time at the Fort Irwin National Training Center in California, Nielson-Green said.

"We are sending the very best to interact with our partners," she said.

David Johnson, of the Center for Advanced Defense Studies, a Washington-based think tank, said Pacific Pathways sends clear signals that America’s rebalance of forces to the region is real and affecting operational thinking.

"A number of domestic pundits and civilian armchair strategists have suggested otherwise," Johnson said. "Pacific Command is able to address the concerns of the administration with this solution."

Elements of 2-2 Stryker Brigade Combat Team, also from Lewis-McChord in Washington state, will travel to Thailand for the Hanuman Guardian exercise, followed by the Salaknib drills in the Philippines and Keris Strike in Malaysia in July, then Garuda Shield in Indonesia in August, she said.

Arctic Anvil will involve Canadian forces, who also will participate in Rising Thunder with Japanese forces, she said.

Pacific Pathways also demonstrates multilateral capacity and may deter potential regional aggressors, but by incorporating exercises that have existed for years, the U.S. is signaling that it doesn’t want to increase tensions or provoke a strong response, Johnson said.