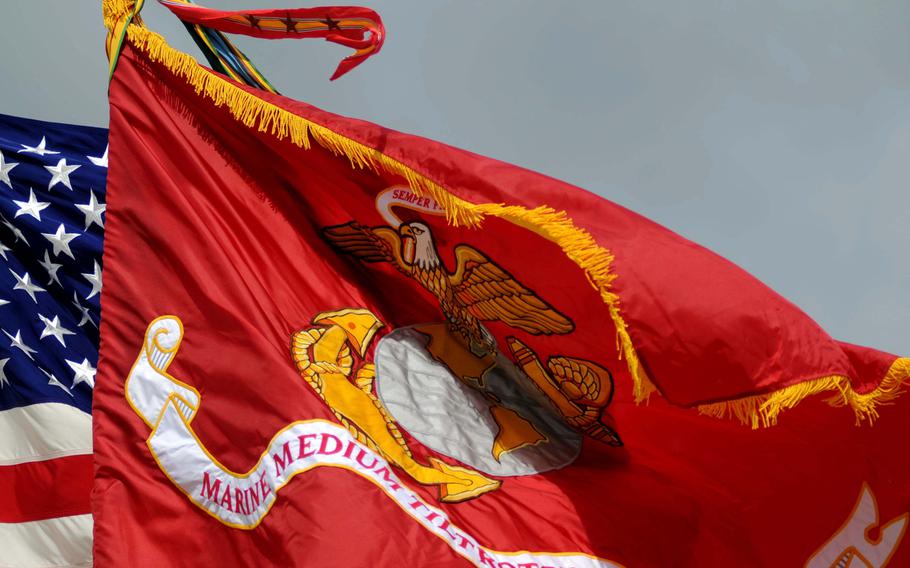 MARINE CORPS AIR STATION FUTENMA, Okinawa — They first crossed into the Pacific Ocean in 1966 to support Marines in Vietnam.

There they flew nearly nonstop in grueling conditions, sometimes riddled with bullets, to keep Marines supplied and carry out emergency medical evacuations.

Later, they brought emergency supplies to disaster-stricken nations across the Pacific and became the first squadron of their kind to make Okinawa their home.

Now they are going to pasture – or, more accurately, they likely are headed to “The Boneyard” or to serve a new master.

A large chapter in the storied history of the Marine Medium Helicopter Squadron 262 “Flying Tigers” came to close Friday during a ceremony at Marine Corps Air Station Futenma. Once the versatile workhorse of the Marine Corps, the Sea Knight, or “phrog,” has become obsolete due to the arrival of the MV-22B Osprey, a hybrid tilt-rotor aircraft that’s faster, more versatile and capable of hauling more troops and gear.

“I used to fly the [CH-46],” said Capt. Art Guzman, a pilot with Marine Medium Tiltrotor Squadron 262. “It’s a great aircraft, but the future has come.”

The last of the CH-46E Sea Knight helicopters on Okinawa will soon be moved to Camp Kinser, where they will await full retirement and a final decision about where they will go next.

As the Osprey takes the reins of medium-lift, troop transportation and supply duties, the phrogs will quietly slip into anonymity.

The Marines haven’t settled on a specific plan yet for the 60-year-old aircraft, but it seems likely that a number of the phrogs will find their way to the 309th Aerospace Maintenance and Regeneration Group on Davis-Monthan Air Force Base in Tucson, Ariz., also known as “The Boneyard.”

There, aircraft are placed on “hold,” in case there is a future need, or they are sold or scrapped for parts. The 2,600-acre field is home to approximately 4,400 aircraft, creating an outdoor museum of military flight history.

Being scrapped or otherwise left in an open field to bake in the Arizona sun might seem like an inglorious end to the Sea Knight’s history, but no erosion can change this aircraft’s history. The Osprey will have big paws to fill.

Frederick explained that although he has never flown one, his father was a Marine phrog pilot “a long time ago.”

Flying Tiger history is peppered with heroism, like the story of Vietnam era-Navy Cross recipient, Cpl. Ernesto “Gooie” Gomez, who ran into heavy enemy fire to pull a wounded Marine to the safety of his helicopter.

There’s the 1968 story of Maj. Dave Althoff, who flew a gunshot, mortared and crippled helicopter to perform critical resupply for Marines on numerous occasions throughout battles like Khe Sahn and reconnaissance team extractions. In all, for seven different occasions, he earned 3 Silver Stars, 3 Distinguished Flying Crosses and more than 50 Air Medals.

On the back of the Sea Knight, the Flying Tigers delivered more than 200,000 pounds of food, water and supplies in only nine days while performing humanitarian aid in the Philippines in 2004.

Tsunami-devastated Indonesia met the Flying Tigers in 2005 when they delivered nearly 500,000 pounds of emergency aid up and down 120 miles of destroyed coastline.

Although the sun is setting on the Sea Knights, and the Flying Tigers soar under the new designation “tiltrotor,” Guzman explained that the advances of the Osprey will help him better serve Marines on the ground.

“I’m sad to see it go,” said Guzman, “but I’m very excited to see what’s to come in the future with the [Osprey].”